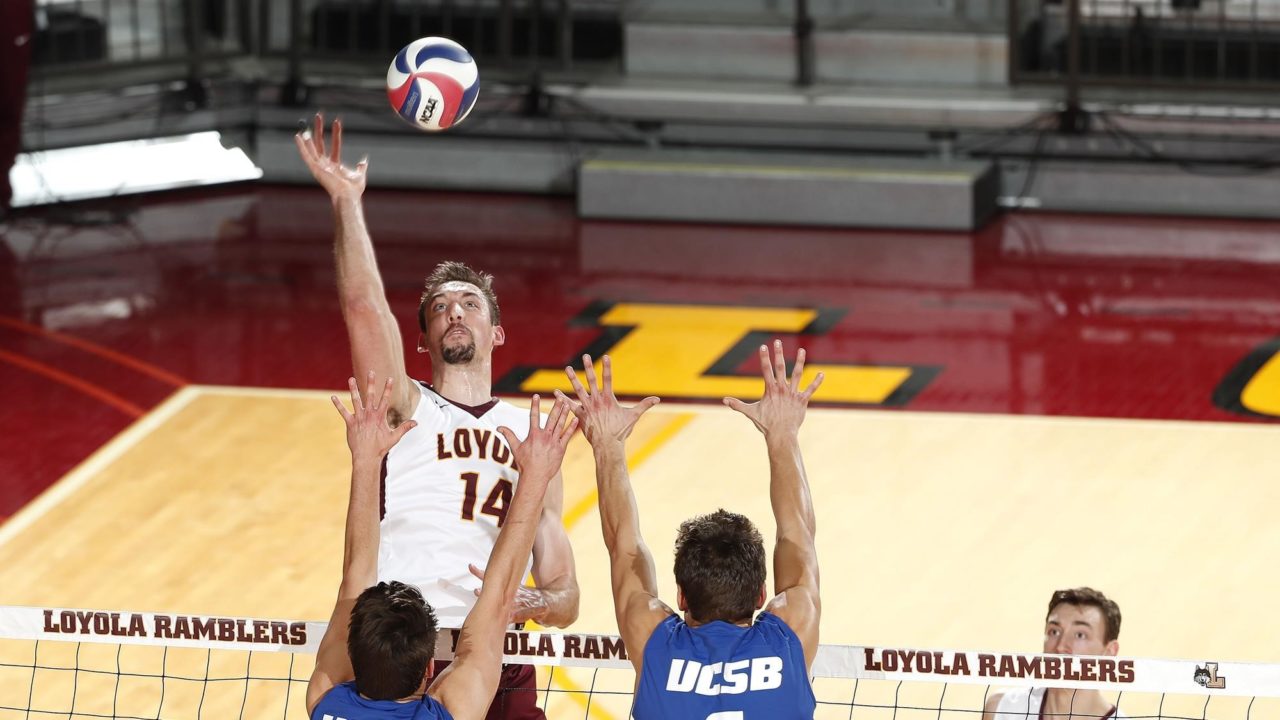 The Ramblers have now extended their win streak to four matches. Archive Photo via Loyola-Chicago Athletics

CHICAGO, Ill. – The Loyola Ramblers hosted the Fort Wayne Mastadons on Saturday night, and the Ramblers pulled off the win in Gentile Arena and have now won four straight matches. The key to victory was the ability to terminate the ball, as Loyola (47) put away 12 more kills than Fort Wayne (35).

Leading the Loyola offense was senior outside hitter, Ricky Gevis, with 12 kills on a .296 clip. Jeff Jendryk also had an impressive offensive performance with nine kills and zero errors on a .692 hitting percentage. Setter Garrett Zolg ran the offense with 36 assists and added two kills and four digs.

Fort Wayne was led in kills by Pelegrin Vargas (.333) and Tony Price (.136) with 12 and seven kills, respectively. The Mastadon offense was held to a .265 clip. Setter, Michael Keegan, delivered 31 assists and was one dig shy of another double-double with nine.

The Ramblers will return to play on Thursday night where they will travel to Columbus, Ohio to face Ohio State in their first of four consecutive road matches. The Mastadons will return home to host Quincy and Lindenwold on Friday and Saturday.

How it Happened:
The first set was the most contested of the match as there were seven ties, before Collin Mahan kill gave the Ramblers a 23-22 advantage. Following a Fort Wayne attack error and Rambler service error, Ryan Jamison secured a 25-23 Loyola win with his third kill of the stanza.

Loyola never trailed in the second set and utilized 16 kills in its 25-21 set-two win.  Tied at 17, Gevis pushed the Ramblers ahead with a kill and Jake Selskyfollowed with an ace.  The point swing propelled an 8-4 run to close out the set.

Coming out of the break, the Ramblers’ continued to fire on all cylinders and did not have an attack error in the stanza.  Loyola combined for a .615 hitting percentage and overcame five service errors for a decisive 25-15 win.

Up Next:
Loyola opens a season-long four-game road swing on Thursday when it visits Columbus, Ohio to take on No. 9 Ohio State at 6 p.m. (CT).

Fort Wayne was 5-0-5 to start the match with an 8-4 lead. The Ramblers went on a four-point run to even the score at 9-all, and went on to open up a 22-17 lead. Fort Wayne got five straight behind Austin Neace to go 22-22, but Loyola took three of the last four points of the set.

Despite a .312 hitting set for the ‘Dons, Loyola found a way to take the set after a 5-1 run late. Pelegrin Vargas had four of his team-high 12 kills in the second frame. Richie Diedrich had two blocks and two of his six kills.

The third set was all Loyola, as they hit .615 in the final frame. Ricky Gevis led the Ramblers with 12 kills. LUC took a 10-5 lead over the ‘Dons and did not yield the lead for the rest of the set.

Vargas led the ‘Dons with 12 kills. Michael Keegan had 31 assists and nine digs to lead in both categories. Diedrich led with three blocks. Tomas Gago led in hitting percentage with a .571 clip (4-0-7).