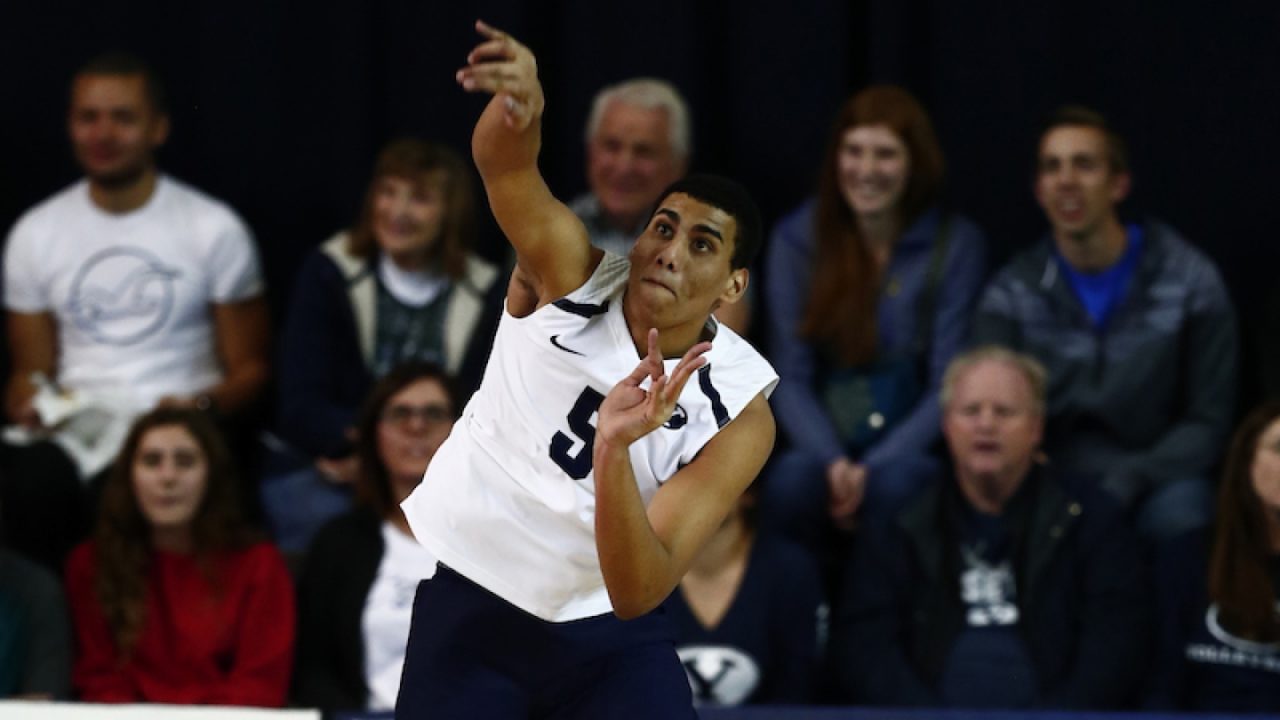 #6 BYU got their revenge Saturday night, sweeping #13 UCSB one night after getting swept by the Gauchos. Current Photo via BYU Photo/Jaren Wilkey

PROVO, Utah – A day after suffering their first loss at home to UCSB for the first time in over 20 years, BYU came out with a purpose and downed the Gauchos with an offensive assault. The Cougars’ white-hot offense hit .444 with only 9 attack errors on the evening.

“I just felt like we were more engaged from the start,” BYU head coach Shawn Olmstead said. “I was open last night in saying that I felt like we were waiting for things to happen, and tonight we went out and created things a little more—so I was happy with that. I thought we made better decisions overall.”

BYU was led offensively by Gabi Garcia Fernandez with 18 kills on .517. Fernandez also added 8 digs on the evening. Fellow pin attacker Brenden Sander added 10 kills and 4 blocks for the Cougars. Freshman libero Zach Hendrickson dug a match- and career-high 10 digs. Setter Leo Durkin ran the uber-efficient offense with 40 assists and added 5 blocks at the net. Price Jarman filled the stat sheet against UCSB; he finished with 5 kills, a match-high 7 blocks, 2 digs, an ace and an assist.

UCSB did not go without a fight. Pin attacker Keenan Sanders finished with team-highs of 10 kills and 5 digs. Corey Chavers added 8 kills, a team-high 3 blocks, 3 digs and a match-high 2 aces to help keep the Gauchos in the match. Setter Randy DeWeese paced the UCSB offense (.215 team hitting percentage) with 25 assists to go along with his 4 digs, 3 kills and 2 blocks.

“I just felt like we were more engaged from the start,” BYU head coach Shawn Olmstead said. “I was open last night in saying that I felt like we were waiting for things to happen, and tonight we went out and created things a little more – so I was happy with that. I thought we made better decisions overall.”

Gabi Garcia Fernandez and Brenden Sander led the team in kills with 18 and 10, respectively. Freshman Zach Hendrickson had a career-high 10 digs in the Cougars’ victory and sophomore Andrew Lincoln earned a career-high hitting percentage with a .818 clip.

Sander opened the first set of the match with a big kill to put the Cougars (6-4) on the board first. The Gauchos (4-4) answered right back with a kill of their own as the two teams began trading points back and forth. BYU gained momentum and widened the gap, going on a 4-0 run that forced UC Santa Barbara to call timeout, trailing 9-5. Following the break, the Gauchos robbed the momentum and scored four-straight points to tie the set up at 9-9. UC Santa Barbara eventually took the lead at 21-19 from a kill by Keenan Sanders, but Fernandez answered with a kill of his own to cut the lead to one. After falling behind 22-20, the Cougars delivered three-straight points to gain a 23-22 edge. The Gauchos tied it up again at 23-all after a timeout, but BYU answered with two kills to take the first set 25-23.

BYU scored the first two points of the second set and maintained the lead for the remainder of the set. UC Santa Barbara kept the score within reach until a couple of kills from Sander gave the Cougars a 15-11 advantage. The Gauchos fought to regain ground in the set, but two more kills from Fernandez helped solidify BYU’s lead at 22-17. Fernandez, who had seven kills in the set, finished off the set with a hard-hit kill from the far-right side of the court to give the Cougars the win at 25-19 and a 2-0 lead.

In the final set of the night, UC Santa Barbara fought to avoid the sweep, keeping the set close. After a wild ball ricocheted off the ceiling, the Cougars maintained their composure to get a big team block from Sander and Price Jarman to go up 12-10. UC Santa Barbara then scored three-straight points to take its first lead since the second set. Fernandez helped tie the set back up after he saved a point with a diving dig and finished the play with a kill to make it 13-13. The score stayed tight, but Jarman delivered an ace for the Cougars to force a Gaucho timeout and go up 21-19. BYU did not look back from that ace and won the final set 25-20 to complete the three-set sweep.

PROVO, Utah – 24 hours after earning its first sweep at Smith Fieldhouse in over 20 years, the No. 14 UC Santa Barbara men’s volleyball team was the victim of a galvanized No. 6 Brigham Young squad, which responded with a sweep of its own on Saturday night. Set scores were 25-23, 25-19, 25-20.

UCSB (4-4) meanwhile was led by sophomore opposite Keenan Sanders‘ 10 kills, but all three of the Gauchos’ starting pin hitters were held under .200 hitting.

The best chance for the away team came in the first set, as UCSB hit .357 as a team with a trio of hitters recording their best games of the night (Roy McFarland had five of his six kills in the first while Sanders and Corey Chavers chipped in four apiece). The Gauchos shook off an early 9-5 deficit to make it a dogfight down the stretch, producing 18 ties and six lead changes. UCSB led as late as 22-20, but BYU – which hit .600 in the frame – responded with a 5-1 run to clinch the opener.

Behind five kills from Garcia Fernandez, BYU led for the entirety of the middle set to go up 2-0.

Strong team serving and seven further kills from Garcia Fernandez helped BYU close out the sweep in the third, as the Cougars were able to rack up 6.5 blocks while frustrating the Gauchos to a .138 hitting percentage. Despite the disparity in the numbers, UCSB remained close to BYU on the scoreboard until the very end, holding a tie as late as 19-19, but the home team wrapped up the match with a 6-1 run.