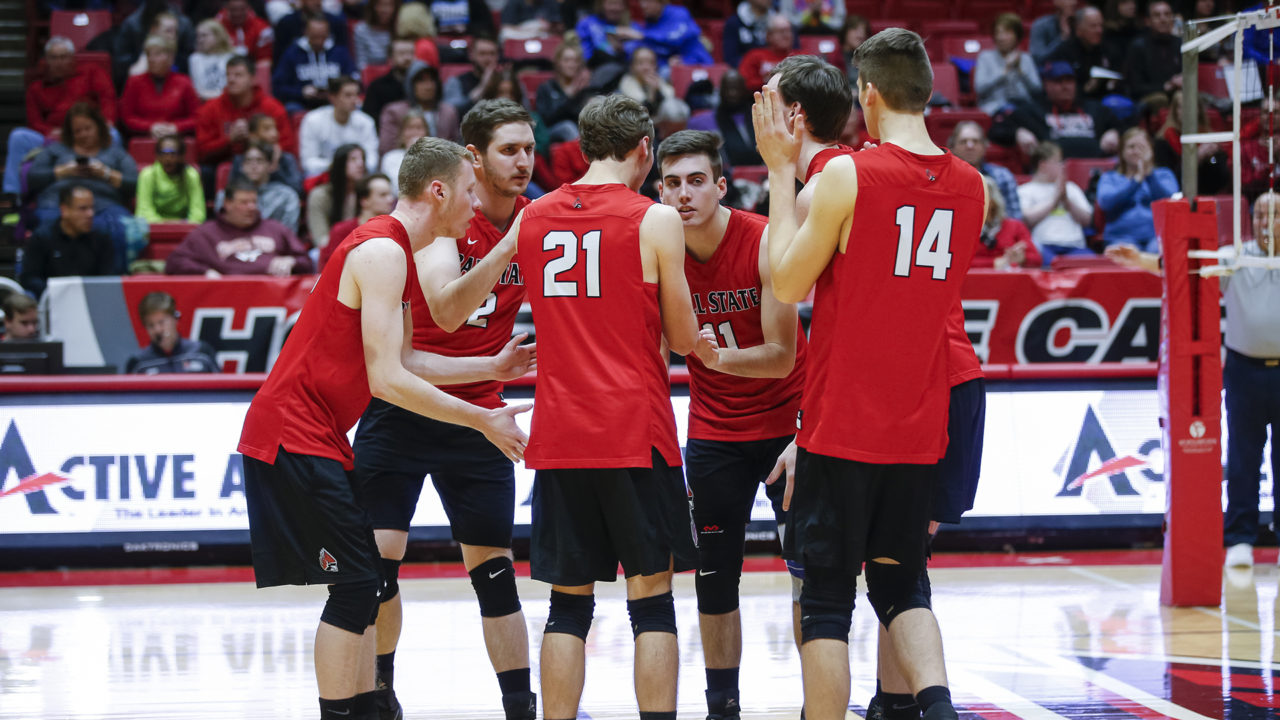 Vote getter Ball State provided the upset of the evening with a four-set road win over No. 12 St. Francis... Current Photo via Ball State Athletics

Vote getter Ball State provided the upset of the evening with a four-set road win over No. 12 St. Francis behind a Blake Reardon 15-kill effort.

The favorites won the remainder of the late evening matches with No. 5 Loyola outlasting No. 16 USC in four, No. 7 Ohio State sweeping No. 19 George Mason and No. 9 Grand Canyon edging McKendree in four.

It Was Over When: After 10 ties, the last at 14-all, Ball State scored 11 of the final 16 to cap the victory. After trailing 17-14, SFU called timeout and cut the margin to one at 18-17. From there, though, it was nearly all Cardinals as BSU wrapped up the win with a 7-2 run. A block and a kill by Matt Walsh and two Red Flash errors made it 23-17 Ball State. Chinnici registered the final two points.

Key Stats: Ohio State won its fourth straight match via sweep, capitalizing on George Mason miscues in the victory. GMU committed 21 hitting errors, while managing just 22 kills in the loss, hitting .015. Seven Buckeye blocks contributed to the Patriots’ offensive struggles. For its part, OSU hit at a .338 clip, including a .500 effort in Set 3, while also outdoing GMU 8-3 in aces, 7-6 in blocks and 36-22 in kills.

Stat Leaders: Redshirt freshman opposite Jake Hanes racked up 14 kills, a team-best five blocks and three aces, while hitting at a team-best .458 clip (14-3-24) to pace OSU. Senior outsides Nicolas Szerszen and Maxime Hervoir added nine putaways each to round out the offense. Szerszen also put the pressure on with four aces.

Sophomore opposite Hayden Wagner tallied nine kills, six blocks, five digs and two aces to guide the Patriots. Redshirt freshman middle Jack Reese was next on the team with four kills, while redshirt junior middle Langston Payne put up three blocks and two kills. Senior setter Brian Negron notched his 3,000th assist, making him the fourth Patriot to do so.

It Was Over When: The Buckeyes ran out to a 12-5 lead in Set 3 with help a 5-0 run, including a pair of blocks and kills by Hervoir and Hanes. OSU used a 5-1 run to push the advantage to nine at 17-8 as Hanes, Hervoir and Casey Pieper notched putdowns. George Mason cut the margin to six twice (20-14, 22-16) as Wagner accounted for an ace, a kill and a block. Szerszen countered with a kill and an ace to put Ohio State on the hill at 24-16. Kills by Wagner and Creamer kept the set going, but Hervoir put down the final nail at 25-18.

Key Stats: After dropping the first set, the Lopes hit .402 the rest of the way en route to a four-set road win. GCU hit .367 for the match after hitting just .259 in the opening set loss. Meanwhile, McKendree went the opposite direction, starting with a .406 effort and never hitting above .250 the rest of the night for a .258 total clip.

Freshman outside Patrick Ross paced McKendree with 14 kills and Redshirt senior middle Brendan Schmidt registered 10 kills and three blocks. Senior setter Pasquale Fiduccia did a little bit of everything for the Bearcats with 42 assists, six digs, four kills and a team-high three blocks.

It Was Over When: Grand Canyon built a seven-point lead midway through Set 4, going up 15-8 on a Turner kill. Ten McKendree errors helped the Lope effort. The Bearcats rallied to within five twice, at 17-12 and 20-15. Four players notched kills, including two putaways and a block by Schmidt, in the rally. Two Alleman putdowns and a third by Turner made it 24-15 GCU. A service error and kill kept McKendree alive, before a service error sealed its fate at 25-17.

It Was Over When: The Ramblers hit at a .447 clip in Set 4 and edged out the Trojans in a stanza featuring 16 ties. USC led by as a many as four at 17-13 behind six Moss putaways and three kills and a block by Wyett. Loyola chipped away and finally tied it up at 21 with kills by five different players. USC called timeout and scored three of the next four, earning a set-point try at 24-22 on a Connor Inlow kill. The Ramblers used a 3-0 run to earn a match-point opportunity at 25-24. After another break, Wyett and Lewis notched putaways to make it 26-25 Trojans. A Ricky Gevis kill tied it up at 26 and a hitting error gave Loyola a second shot at 29-28. In the end, a Jendryk kill and USC miscue clinched the match at 31-29 Ramblers.