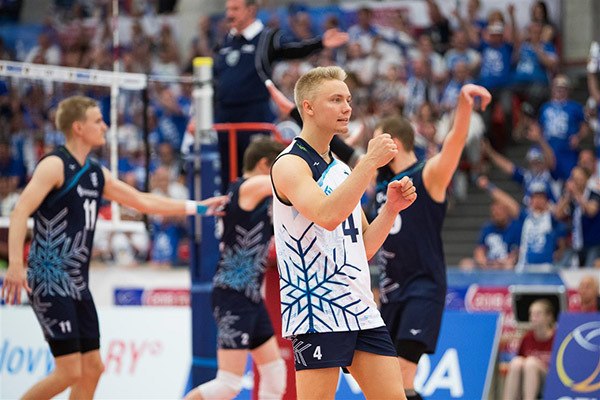 Finland has been the most dominant blocking team of the tournament so far, and stayed undefeated with a defeat of Spain on Saturday. Current Photo via CEV

Pool F, like so many of the other pools, will come down to the wire on the final day of competition, with group leaders Finland and current 2nd-place holders Czech Republic vying for the automatic spot at the 2018 World Championships in day 5’s last match.

The Czechs will have the home-court advantage, but Finland will have its monstrous middle block of Tommi Siirla and Sauli Sinkkonen, who have 14 and 12 blocks, respectively, through 4 games, to rank tied-for-1st and 3rd in the tournament so far.

If either team wins by a 3-1 or 3-0 margin, then that team will automatically advance to the World Championships. If the winning team is Finland and the losing team are the home Czech side in that scenario, then Spain would jump Czechia with a win of any kind.

A 3-2 win by either team would assure the Finland-Czech-Spain finish order for the tournament, regardless of the outcome of Spain’s final match.

The Czech Republic hit 59% in the game, recording just 5 errors and having just 5 shots blocked as compared to 36 kills on 61 attempts. They also served up 8 aces in the game from 7 different players, which held Cyprus to just 35% positive reception and 16% excellent reception.

The win for the Czechs atones from a surprising loss to Spain a day earlier that put them in a hole heading into the final match of the group on Sunday.

“I think that we entered the first set not well, even though we were winning, but it was not good. Then we improved our play and we believed that if we focus only on our play it will be enough to beat them.”

A 14-block effort from Finland combined with just a 27% positive reception for Spain resulted in serve-and-block dominance for the former. Tommi Siirla had 7 blocks in the game to make him the tournament-leader with 14 so far. He also hit 58% with 7 kills on the match – second only on his team to the 15 from Oli-Pekka Ojansivu.

Finland, with the win, set up a win-and-in match against the Czech Republic for Sunday. If Finland were to win and advance, it would be their second-straight World Championship invite, after having been absent for the previous 32 years.

Both teams were unbeaten coming into the match – Finland expectedly so, but Spain was coming off an upset of the Czech Republic on day 3.

“It’s the fourth day, and looking at it I think we had a problem with motivation because we are already out of the qualification,” he said. “I think we had a hard schedule – first Spain, then Czech Republic and then Finland – three hard games in a row. We played 5 sets against Spain and gave the fifth set away and that followed us into the next games. But it’s a good tournament, we’re now here to learn.”

Sweden had two players in double figures in the quick 3-setter. Jacob Link scored 18, all on kills, while Staffan Blomgren added 13 that included 2 blocks.

Both sides had just 2 aces, which for Sweden bth came from Philip Pettersson. In spite of Sweden not putting up huge numbers at the service line, Northern Ireland still struggled in reception. They had just 7% excellent reception and just 22% positive on the game.