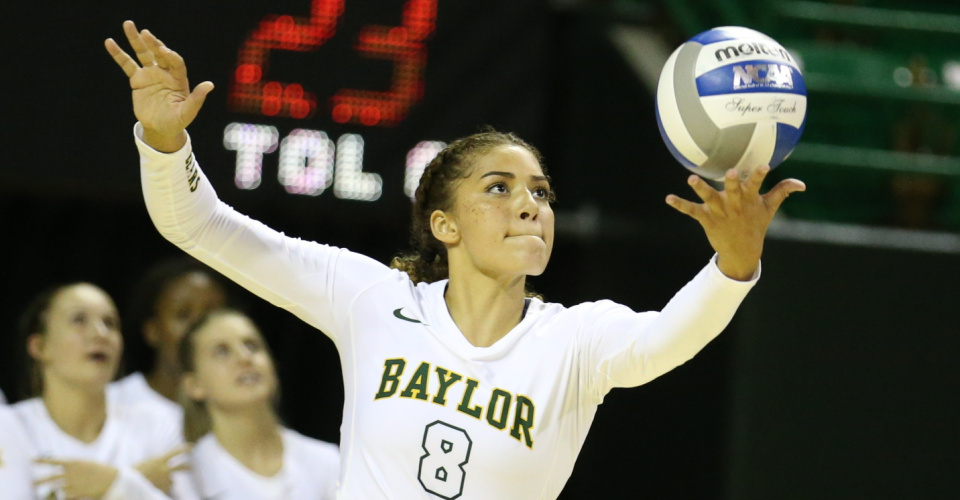 #23 Baylor swept the visiting West Virginia Mountaineers on the strength of nine service aces, recording their ninth consecutive home victory. Baylor’s 15-4 record marks the best start by the Bears since 2009, which went 17-2 over the same number of matches.

Offensively, the Bears were led by junior outside Aniah Philo and freshman outside Yossiana Pressley, who had nine kills each. Senior libero Jana Brusek registered 14 digs, and freshman Hannah Lockin dished out 32 assists.

In the second frame, sophomore middle Shelly Fanning, recorded her 500th career kill, finishing the match with six successful attacks. She also led Baylor with three of the nine aces.

In the first, West Virginia was leading by three midway through the set when the Bears countered with seven straight points, eventually taking the frame 25-20. Baylor carried the momentum into the second set and won by a comfortable 25-18 margin. The third was more of the same with Baylor grabbing an early lead and never looking back to win 25-12 and complete the sweep.

West Virginia plays next on Friday when they host Oklahoma, while Baylor travels to Kansas State for a Saturday tilt.

Baylor swept West Virginia for the second-straight meeting and are now 5-0 against the Mountaineers under head coach Ryan McGuyre. The Bears have only dropped one set in the last five meetings to WVU.

Redshirt sophomore Shelly Fanning’s six kills pushed her past 500 career kills in the match, capturing the 500-mark in the second set. She led at the net with seven blocks and allowed Baylor to outblock the Mountaineers, 9.0-8.0.

Baylor and West Virginia traded point after point to open the match, and BU was forced to call an early timeout after a WVU service ace to trail 14-12. A Lockin and Fanning block fueled a 5-1 run and put Baylor in front for good, winning the opening frame 25-20.

BU and West Virginia opened the second set with a 2-2 tie, but Baylor would pull in front after holding the Mountaineers to a -.138 hitting effort on six kills and 10 attack errors. Pressley’s four kills in the set helped BU gain the 2-0 advantage, 25-18.

The Bears compiled an 8-5 lead after three consecutive kills from Philo, prompting a West Virginia timeout. BU ended the match on a 7-2 run as Fanning tapped down the final point, 25-12.

HIGHLIGHTS
• Shelly Fanning recorded her 500th career kill at Baylor, finishing with six kills to bring her career total to 503.
• Baylor had nine service aces in the match, good for a new season high.
• The Bears held West Virginia to a -.011 hitting effort in three sets, .263 worse than the Mountaineer’s season average (.252). It was BU’s seven opponent hitting under .100 against the Bears this season.
• Aniah Philo and Yossiana Pressley led all players with nine kills each.
• Baylor leads the all-time series, 11-3, and is 5-0 against WVU under McGuyre.
• The Bears have now won nine-straight home matches, matching last year’s home win streak.
• BU’s 15-4 start through 19 matches is the best season mark since 2009. The 2009 squad was 17-2 through the first 19 matches.

STAT OF THE MATCH
503 – the career kill total by redshirt sophomore Shelly Fanning in 72 career matches.

TOP QUOTE
“We’re committed to being one degree better with (Hannah Lockin) who just played so good at Iowa State and again tonight. We’re siding out at a very high level. It reminds me of the old days when I was coaching guys. As long as we’re up, we’re going to win because we can just keep siding out. Yossi (Pressley) is getting better and better, and Hannah’s getting better and better. Then we have such great maturity in our seniors, and Camryn (Freiberg) is really is doing little things that aren’t showing up on the papers. She’s handling overpasses well, winning jousts…Her commitment to being better is important. Katie (Staiger) is doing some great things for us blocking. Another slow night for her offensively, but she’s still committed. It’s fun. Our girls are committed to getting better. We learn a lot from (the Texas match), but we want to come out of each match learning the same. I think that’s what the difference has been. It was a good sweep at TCU, a good sweep at Iowa State, but we’ve got to find a way to learn from it and not just pat ourselves on the back.” -head coach Ryan McGuyre

WHAT’S NEXT
The Bears receive a midweek bye before traveling to Manhattan, Kan. to face Kansas State Saturday, Oct. 14, at 7 p.m. CT.

Natania Levak had a team-best six kills for WVU, while Payton Caffrey had five. Mia Swanegan and Erin Slinde each had three, with Slinde hitting .333 in the process. Katelyn Evans added a pair of kills as well.

WVU finished the match hitting -.011 with 21 kills and eight team blocks. Aniah Philo and Yossiana Pressley each had nine kills for Baylor, who hit .207 with 36 kills, nine blocks and nine aces.

Losing a three-point lead midway through the set, the Mountaineers couldn’t find their offense and fell to the Bears, 25-20. After a 3-0 run put Baylor on top 9-6 in the set, WVU scored four straight to take an 11-10 lead on a kill from Levak. The Mountaineers added four more in a row, using an ace from Proctor and a setter dump by Slinde for a 15-12 advantage. However, Baylor countered with a seven-point run, taking a 19-17 lead. Slinde and Levak each found the court again, but West Virginia dropped the set to fall into a 1-0 hole in the match.

The struggles continued into the second set, as West Virginia dropped the frame 25-18 to Baylor. The Bears grabbed an early lead and never looked back. Slinde had a block and Evans added a kill, but Baylor capitalized on three straight WVU miscues on a 4-0 run for a 16-8 lead. The Mountaineers put together some momentum, scoring on a kill and a block from Swanegan. However, another four in a row from Baylor put the Bears up 22-13. DeMeo and Levak paired for a block, while Levak also added a kill to keep the Mountaineers alive, but the Bears came away with the set in the end for a 2-0 lead in the match.

Baylor again took an early lead in the third and powered to the 25-12 win. The Bears grabbed seven of eight to take an 11-6 lead on a service ace. They added three more to make it 14-7 before Swanegan and Caffrey pair for a block. Caffrey came through with a kill, and Levak and DeMeo put together a block, but the Mountaineers couldn’t cut into the Bears’ lead, which grew to 10 at 21-11. Baylor scored four of the last five points to win the set as WVU dropped the match, 3-0.

WVU returns to Morgantown to host Oklahoma on Friday, Oct. 13, in a 6 p.m. tilt.