Aces Were Wild in Men’s Qualifying Pool A 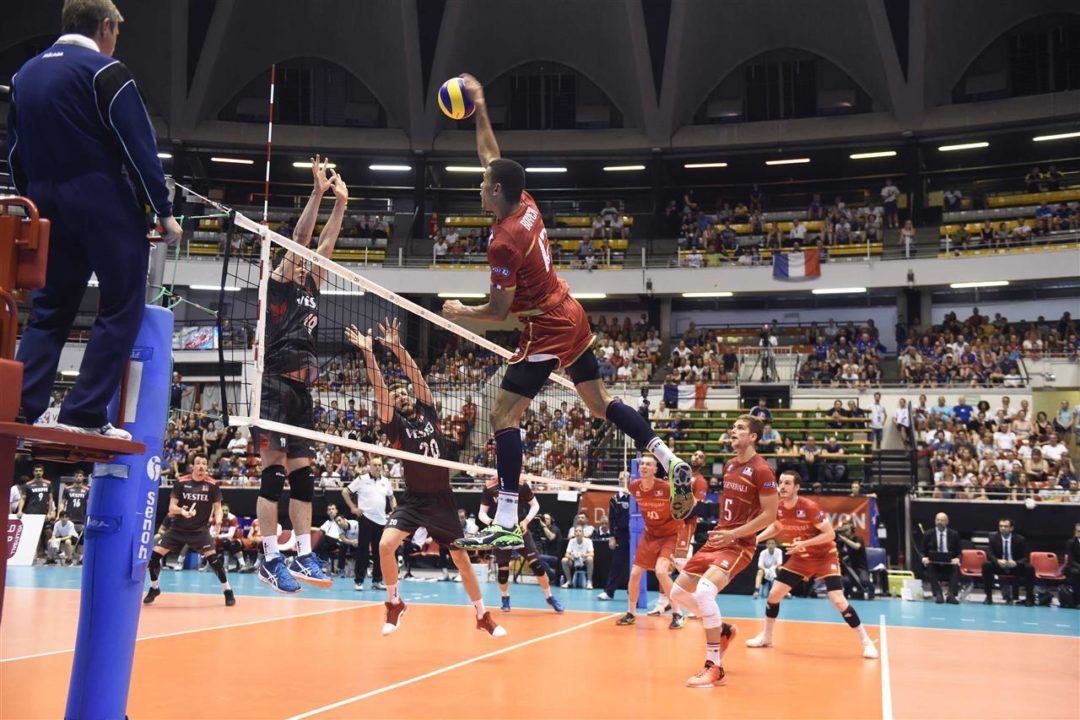 France and Germany now stand atop the group with 3-0 marks, while Turkey suffered its first loss of the tournament. Current Photo via FIVB

Another day brought three more sweeps in European Qualifying Pool A as Germany, Ukraine and France registered Day 3 victories in Lyon, France. France and Germany now stand atop the group with 3-0 marks, while Turkey suffered its first loss of the tournament.

The Germans used 11 aces and a nearly flawless hitting effort to register a 25-12, 25-12, 25-14 victory over Iceland. Germany hit at a jaw-dropping 76 percent efficiency in the match, while holding Iceland to a 36 percent effort.

The Germans trailed briefly in Sets 1 and 2, but cruised to the victory after that, even involving many reserve players in the win.

“We did better today than yesterday and I am happy that everybody played a little role in this victory,” German captain Lukas Kampa said. “With all my respect for Iceland because they tried their best, it’s difficult to get prepared for this kind of match. It’s such a big difference in the level of the opposition. The hardest part is to stay focused, warm and not to get injured. But still on the court it’s nice to see that they are excited to play here. In a way it’s nice to have such a team in the tournament but we have different goals. Now we have some time to rest and we will need this energy for tomorrow’s match against Turkey.”

“We spent a lot of energy in yesterday’s game with Turkey,” Stefansson, the Icelandic captain, said. “Something was missing in this match. However, we are enjoying our stay, we are very happy with our game and we have achieved some of our goals. Moreover, we had to play against really tough players, sometimes it’s a bit intimidating but it’s a great experience.”

“The two last sets were tight but thanks to some aces we avoided a fourth set that could have been really hard,” Ukrainian outside hitter Vasyl Tupchii said. “We are really happy for this victory; the audience was perfect and I believe they enjoyed the game.”

Four aces helped the Ukrainians to a 25-13 Set 1 win. In Set2, Azerjaijan fought back with several points by Dmitriy Obodnikov and Vugar Bayramov to keep things close, but could not pull off the win. Ukraine again looked to its serve in crunch time, using two aces to nab the 25-20 win and the match.

“We are disappointed. We failed completely in the first set, whereas the second and the third sets were within our reach but the players are physically and mentally tired,” Azerbaijan coach Farid Jalalov said. “However this is not an excuse. There were good things yesterday against Germany, today against Ukraine, we could have done better.”

France remained undefeated in qualifying action, working past the Turkish side in a 25-21, 25-18, 25-17 win. A 63 percent hitting effort and 26 Turkish miscues aided the French in the victory.

“Today we tried our best but it was not enough,” Turkish coach Jasko Milenkoski said. “Before the match we knew who the favourite was. They played amazingly, especially in attack, where we could not stop them whereas we were quite close to France in all other aspects of the game. We must stay positive because it’s only our third match together.”

Kevin LeRoux managed 10 points with seven kills, two aces and a block. Trevor Clevenot and Julien Lyneel added nine points apiece. Earvin Ngapeth even made an appearance in the match, returning from injury.

“Turkey received very well,” French coach Laurent Tillie said. “They were strong in the most difficult situations but we were excellent in attack. I wish I could have given more time on the court to Earvin Ngapeth but it’s difficult to know how ready he is after his injury. He needs to find his rhythm back before Sunday’s big match against Germany.”