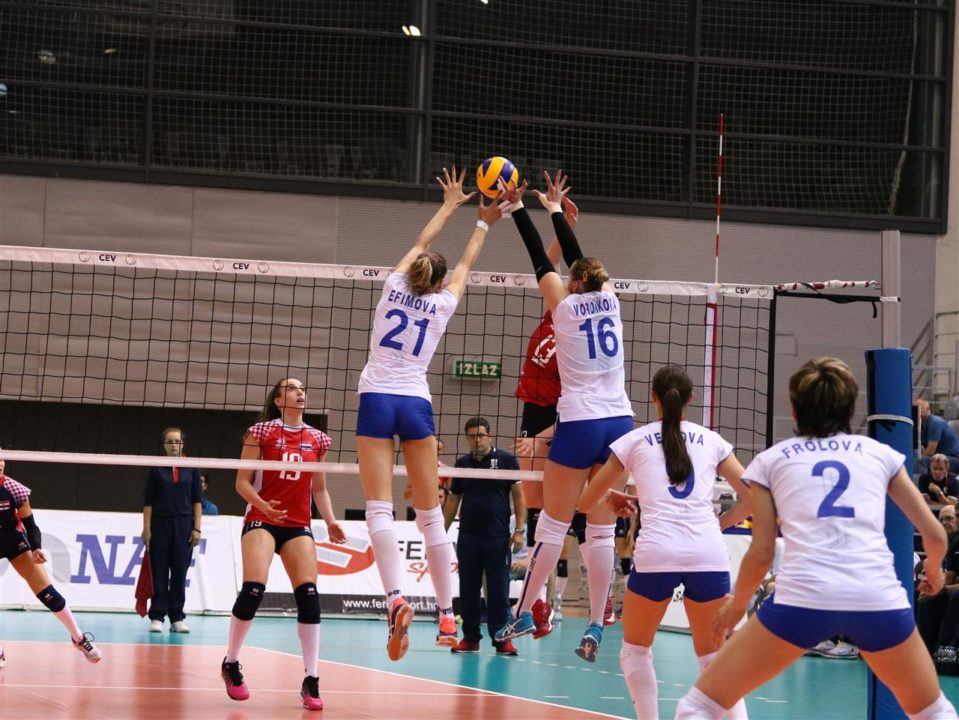 Russia officially clinched a berth at the 2018 World Championships with a four-set win over Croatia. Current Photo via CEV Volleyball

Russia officially clinched a berth at the 2018 World Championships with a four-set win over Croatia, while Greece secured the second place spot with a four-setter over Austria in the finale. Hungary defeated Georgia to round out pool play.

Hungary 3, Georgia 0
After leading Sets 1 and 2 throughout, the Hungarians had to come back from a 16-12 deficit to steal away the 25-21 win to close out the sweep of Georgia.
Hungary served up nine aces, while allowing just one, and hit at a 46 percent clip in the win.
“We are not that happy with the performance we showed in the first two matches we played here but we came back strong especially in the match with Croatia,” outside hitter Bernadett Dekany said. “We will now enjoy some rest and after that we will start preparing for the World Grand Prix.”
Dekany led all scorers with 15 points, including 13 kills. Greta Szakmary added 13 points, with 12 kills and an ace.
Ann Kalandadze managed eight points for Georgia, with seven kills and one blocks.
“The game did not go the way we wished in the first two sets but the third one was good and it did show how we can play and also the desire that the players have to win and their determination to be successful,” Georgia coach Paata Ulumbelashvili said.

Greece 3, Austria 1
Ten kills and 10 aces helped Greece overcome a less-than-stellar hitting effort and secure a four-set win over Austria and a spot in the European qualifying third round. The Greeks hit just 36 percent in the 20-25, 25-19, 25-22, 25-23 win.
Greece bounced back from a wire-to-wire loss in Set 1 to lead throughout in the next two sets, before securing the win by battling back from down five in the final stanza.
Austria led 21-16 in Set 4, only to see Greece close out the match with an 9-2 run. The Greeks managed four blocks and three aces in the final stanza.
“This was our fifth game in five days and we are very tired,” Greece’s Evangelia Chantava said. “We are happy with the victory but -our performance was not that good. We nevertheless are happy that we made it to the next round of qualifications.”
Anthi Vasilantonaki put up 22 points, with 18 kills, two blocks and two aces in the win. Evangelia Merteki added 13 kills, including 10 kills.
“I am happy that we made it to the next round since Greece has not participated in any major competitions for many years, especially in women’s volleyball,” Greek coach Georgios Rousis said. “Today’s game was good but not excellent. However, my players have shown that they deserve their spot on the global volleyball map.”
Sma Markovic registered 19 points, including 17 kills to pace Austria. Katharina Holzer (13) and Sabrina Muller (10) also tallied double-digit point totals. Muller managed a team-best three blocks.
“I am a little disappointed because we did lead quite comfortably in the fourth set and ended up losing it in the end, and with it the game as well,” Holzer said. “We nevertheless played a good game, especially since it was our fifth in as many days.”

Russia 3, Croatia 1
Russia closed out the women’s European qualifying with an undefeated record, downing hosts Croatia 25-22, 25-21, 20-25, 25-15.
“I am happy that this tournament has come to an end and we will now have some time to rest,” Russian middle blocker Irina Zariazhko-Koroleva said.
The Croatians led at the first timeout of each set and were in control at the midway point of Set 1 and 3, but could not hold off the No. 1 Russians. Four aces and eight Croatian errors helped Russia in Set 2 and five blocks and eight errors aided the team in Set 4.
“We played a good game against Russia.” Croatia setter Ana Grbac said. “Let’s be realistic: none expected us to win a set from this match and I think we made everyone happy with this achievement. I want to say many thanks to the fans in Osijek who have been cheering us on for the whole game.”
Russia outblocked Croatia 9-7 and each team served up eight aces, but Russia managed 11 more kills in the victory.
Tatiana Kosheleva topped the Russian side with 14 points, including 11 kills, while Mariia Frolova (13), Irina Voronkova (12) and Ekaterina Efimova (12) followed.
Samanta Fabris managed a match-high 20 points, with 16 kills, two blocks and two aces. Ema Strunjak and Lucija Mlinar added 10 points apiece. Strunjak tallied three blocks, while Mlinar added three aces.