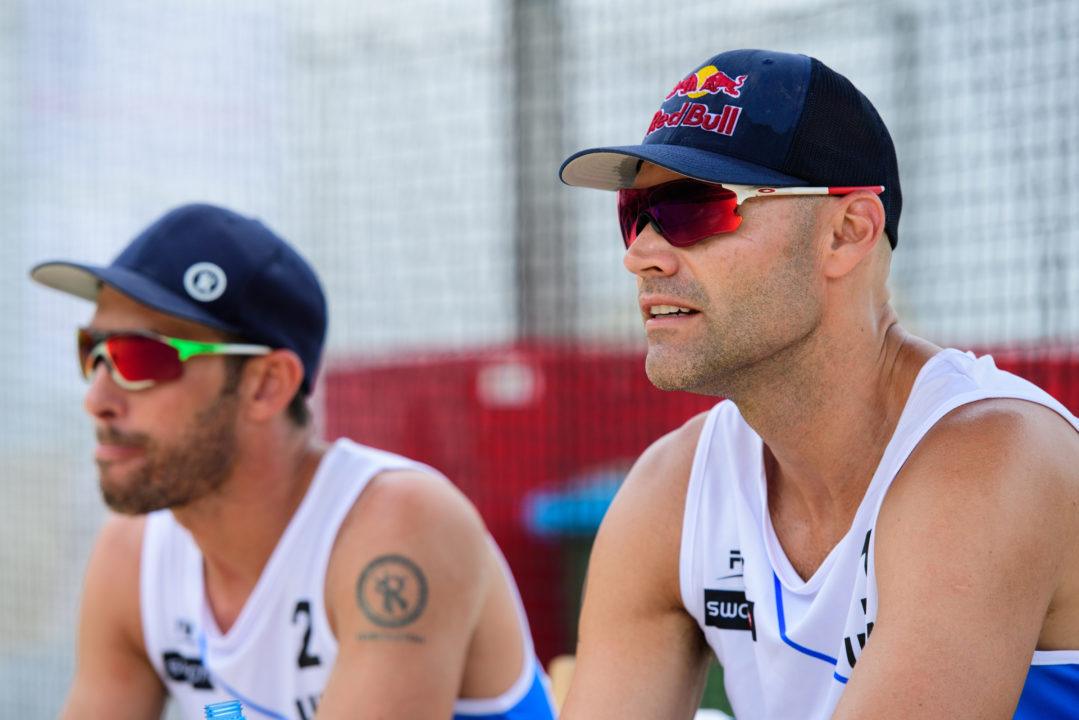 In a big early challenge for the world’s #2-ranked team, Phil Dalhausser and Nick Lucena beat their American counterparts Ryan Doherty and John Hyden in their tournament opener on Saturday at the FIVB World Championships. The final score was 2-1 (17-21, 21-18, 16-14)

Dalhausser especially isn’t known to play his best volleyball early in matches or tournaments – instead tending to warm-up and being the best player in the world at getting into a rhythm. Doherty/Hyden took advantage of that by winning the first set 21-17.

Even winning a set was a big moment for Lucena and Hyden. The 7’1″ Doherty, the tallest player in the tournament, had 7 blocks in total and 4 in the first set. His 7 were more than all other three players combined in the match.

The crafty veteran Hyden, the oldest player in the tournament at 44 years and 9 months old, kept them competitive s the teams climbed the ladder in the 2nd and 3rd sets, but right on cue, Dalhausser played his best volleyball late. He had 11 kills of his team’s 16 kills (1 ace, 8 kills, 2 blocks) in the 3rd set alone. He was able to get in a rhythm almost exclusively hitting from the left side of the court. Meanwhile, Lucena did just enough, hitting consistently line, for his part to keep Hyden off-balance on defense.

Dalhausser said that he focused on giving Lucena more room on his sets to avoid the length of Doherty.

That’s the 4th time that Dalhausser/Lucena have been Doherty/Hyden this season. All four games have been competitive, including 2-1 outcomes in the last two. That growing familiarity between the two owed to the back-and-forth nature with not many points on serves throughout the match.