Americans, Canadians Among Final Four at Bangkok One Star 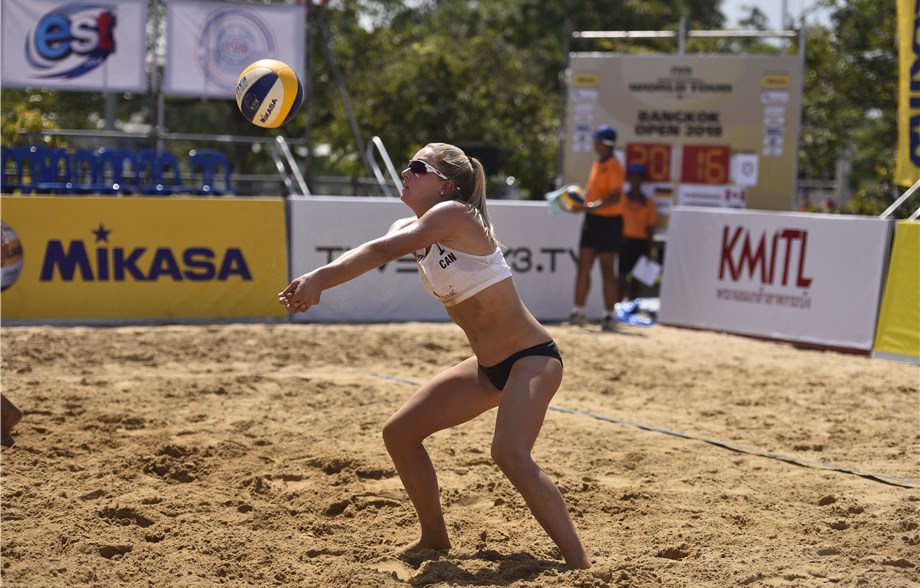 Scarbrough/Davis and the McNamara twins received a bye to the quarterfinals, while the other pairs had to post two victories to earn a semifinal berth.

Soria/Carro upset No. 1 seed Mailen Deliz/Leila Martinez in straight sets in the Round of 12 and then knocked out Phnom Penh gold medalists Anna Behlen/Sarah Schneider (Germany) in the quarters.

Kusano/Nishibori topped Thailand’s Pronsuda Kristana/Yodsaphat Pakham in straight sets in the Round of 12, but had to fight through a three-setter with Norway’s Zylstra Hanne Haugen/Janne Pedersen to earn a spot in the final four.

In the quarterfinals, the McNamaras edged past Latvia’s Agnese Calca/Marta Ozolina 23-21, 21-15, while Scarbrough/Davis made it through a tiebreak with Lithuania’s Urte Andrukaityte/Irina Zobnina after dropping the opening stanza.

Semifinals against Spain at 9:30am local time! Let’s do this 🇨🇦

This is the first FIVB Tour event for both Scarbrough/Davis and the McNamaras and the duos are riding five-match win streaks into the semis. Kusano/Nishibori are vying for their second straight FIVB gold following a top placing at the Manila One Star last weekend, while Soria/Carro are looking to best their runner-up finish in Manila.

The women’s semifinals are slated to begin at 10:30 p.m. ET Saturday with Soria/Carro facing the McNamaras.

The match between Scarbrough/Davis and Kusano/Take is set for 11:30 p.m.

The losers will play for bronze at 2 a.m. ET Sunday followed by the gold medal match at 3 a.m.

On the men’s side, teams from Austria, Japan, Russia and Spain make up the final four.

Spain’s Javier Huerta/Alejandro Huerta won in straight sets in the Round of 12 and pulled out a tiebreak win in the quarterfinals to earn a semifinals berth for the second straight week, following a fourth-place finish at the Manila One Star.

The other three semifinalists won their respective pools receiving a free pass to the quarterfinals. Only Russia’s Aleksandr Kramarenko/Taras Myskiv were challenged, moving past Japan’s Yuya Ageba/Katsuhiro Shiratori in tiebreak after faltering in the first set.

The Russians and Japanese are playing in their first FIVB event as duos. The Spaniards are vying for their first medal, following a fourth-place effort at last week’s Manila One Star, as are the Austrians, which finished fifth in Manila for their best ever FIVB showing.

The third place match is set for 4 a.m. ET Sunday.

The men’s final will be played at 5 a.m. ET Sunday.