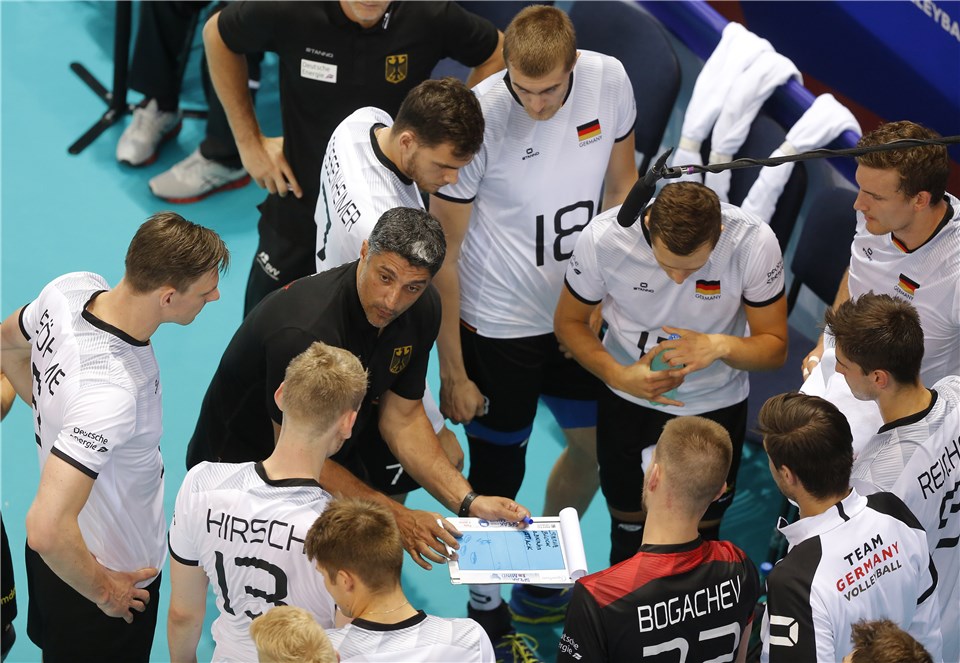 Germany has gotten off to a slow start to the Volleyball Nations League, though coach Andrea Giani has shown the ability to lead teams to unprecedented levels of success.  Current Photo via fivb.org

Germany was arguably one of the greatest benefactors of the FIVB’s decision to change the format of the World League to the Volleyball Nations League.  Their decision to withdraw from the tournament in 2015 placed them down in Group 3 for the 2016 edition. In 2016 they reached the final of Group 3 and anticipated promotion to Group 2. However, they were handed a defeat by Slovenia who were fresh off the success of their 2015 EuroVolley silver medal.  Slovenia was coached at the time by Andrea Giani. Germany signed Giani as their coach in February of 2017. The following year they placed 3rd in Group 3 after being upset in the semifinals by Spain.  This again was not good enough to move up to Group 2. This hurt their world ranking since there were only 9 ranking points possible out of a total of 50 for teams taking place in this bottom group.

When the move came to the 16-team Volleyball Nations League, it put Germany back in the mix of top-tier volleyball. Germany has proved that it can compete with the world’s elite. They surprised many people by winning the bronze medal at the 2016 FIVB World Championships with Vital Heynen on the sideline. In 2017, Giani led them to the finals of the 2017 EuroVolley with a 3-2 upset victory over Serbia in the semifinals. Georgy Grozer led the way with 20 points on 19 kills and an ace for the Germans. Denis Kaliberda chipped in 12 points from 9 kills and 3 blocks in the semifinal win. This was Giani’s 2nd consecutive silver medal in Europe’s highest international competition after reaching the 2015 final as the head coach of Slovenia.

Germany has shown they have one of the most capable coaches in the world. Giani coached Taylor Sander at BluVolley Verona from 2014 to 2016, and he set club records for most wins and highest finish in the league. His time with the Slovenian National Team saw them reaching the highest levels of success in Europe’s top competition. He matched that same result with Germany, which was also their highest finish ever in EuroVolley.  Obviously expectations are high for this group, but what should fans make of their 0-3 start this weekend? Is this part of the development Giani envisioned as he gets his team ready at the 2018 FIVB World Championships?

In Germany’s defense, they have arguably had the most difficult pool of the opening weekend. They had to face Italy’s full-strength squad on the opening day. They followed that match with a Serbian team who may not have used Marko Podrascanin or Aleksandar Atanasijevic (who just played in the CEV Champions League Final Four 2 weeks ago with Aaron Russell), but still had Uros Kovacevic, Marko Ivovic, and Srecko Lisinac in their lineup. It also helps that Serbia’s backup at opposite is Drazen Luburic.  He just finished his season as the starting opposite for Zenit St. Petersburg as they reached the Russian Super League finals against Zenit Kazan. Germany closed out the weekend against Brazil. While Brazil did not field the same squad that earned them a gold medal in Rio in 2016, Wallace, Eder, William, and Isac Santos are all world-class players.

Germany went into without two of their biggest stars who were instrumental in their success last summer at EuroVolley. Denis Kaliberda in not on the roster after taking part in the CEV Champions League Final Four with Podrascanin, Russell, and Atansijevic. Georgy Grozer will also not be utilized at this tournament. The opposite finished up his season with Belogorie Belgorod in Russia. It appears with this team selection that Giani is using this tournament for players to get tuned up in order to peak in September. He remained positive after the latest defeat to Brazil saying, “My boys played a great game, but we missed too many chances.” It will be interesting to see if these early struggles pay off later. Giani is a coach that continually proves that he has a plan and a process for his teams to reach success.