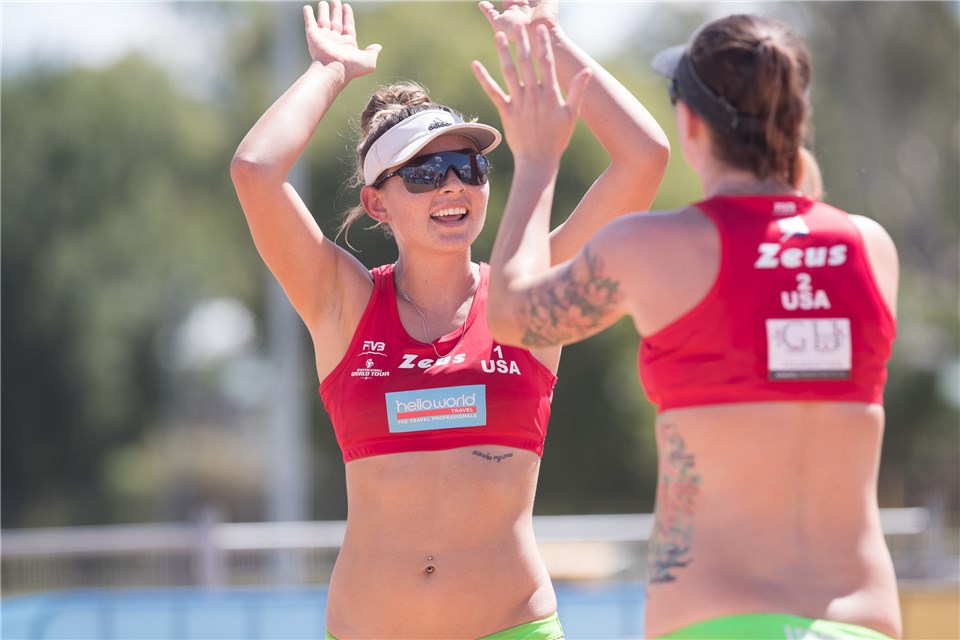 Three Australian pairs, including the 2017 men's champion and runnerup, and three American pairs, are through to the Shepparton One Star semifinals, set for Saturday afternoon.  Current Photo via FIVB

The four pool play winners earned free passes to the quarterfinals, while the remaining eight teams (the second and third place finishers in each pool) faced off for the right to move on to the quarters on Friday.

Among those with automatic berths to the quarters were four American teams, two men’s and two women’s. Both Amanda Dowdy/Irene Pollock and Jace Pardon/Caitlin Ledoux took advantage of the opportunity and earned spots in the semifinals. It took a comeback effort for Dowdy/Pollock to break through after dropping the opening set. Pardon/Ledoux, who are playing in their first tournament together, won in straight sets.

The most intriguing match of the day was between New Zealand’s Shaunna Marie Polley and Kelsie Wills and Dutch qualifiers Katja Stam /Julia Wouters. The Dutch pair took the opening set 25-23 and fought to the end in the remaining two, falling 37-35 and 15-12 to give the homestanding Aussies the semifinal berth.

On the men’s side, American qualifiers Chase Frishman/James Avery Drost are in to the semis alongside two Australia teams and a German pair. Frishman/Drost survived a three-set win to advance in their FIVB Tour debut as a pair, while Aussies Cole Durant/Zachery Schubert also won went the distance.

A medal of any kind would be a first for Dowdy/Pollock, who joined forces in June 2017, finishing as high as fifth at the Daegu and Ulsan One-Star events.

Wills/Polley finished third at the Ulsan One Star in July. Italians Marta Menegatti/Laura Giombini are looking for their best finish since placing ninth at the 2016 World Tour Finals.

On the men’s side, Christopher McHugh/Damien Schumann are looking to defend their 2017 Shepparton One-Star crown, while countrymen Durant/Schubert are looking to better their runner-up finish.