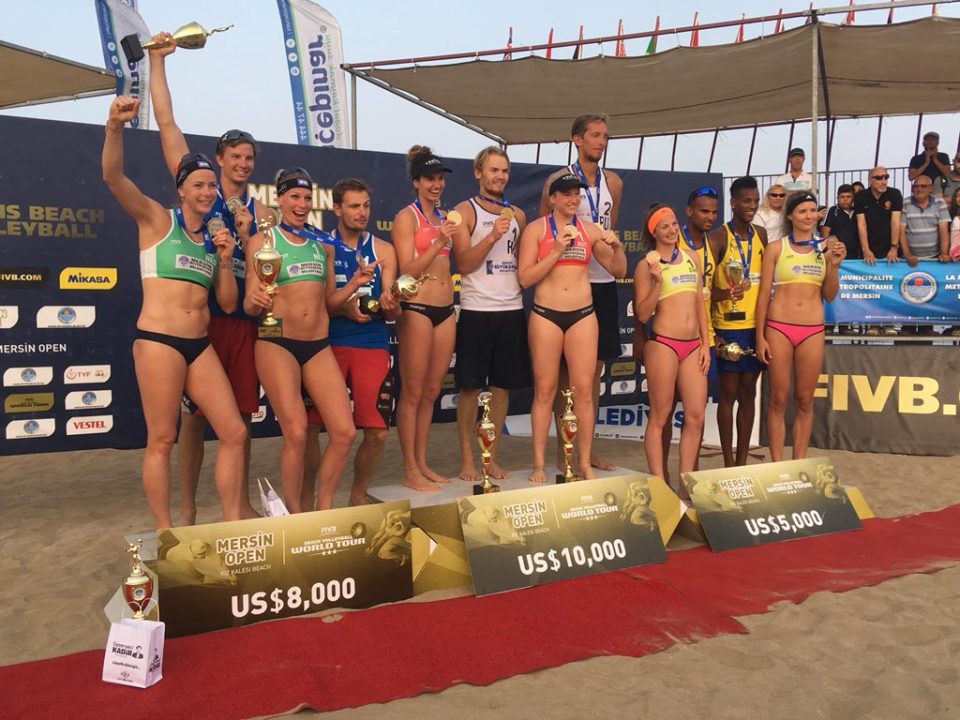 It was a day of firsts in the championship matches of the Mersin Three-Star on Sunday as Austria's Lena Plesiutschnig/Katharina Schutzenhofer and Russia's Ilya Leshukov/Konstantin Semenov earned their first World Tour gold medals with three-set championship wins.  Current Photo via FIVB

It was a day of firsts in the championship matches of the Mersin Three-Star on Sunday.

On the women’s side, Austria’s Lena Plesiutschnig/Katharina Schutzenhofer fought through a three-setter against Dutch pair Madelein Meppelink/Sanne Keizer for their first World Tour gold medal.

“It’s unbelievable, I’m speechless,” Plesiutschnig said. “It was such a tough game and the Netherlands played so well and in the first set we couldn’t finish and they scored some really good points. In the middle of the second set we knew that we would have to fight for every point if we wanted to win the gold medal and then we started to play.”

The Austrian pair made the final with a 21-13, 23-21 win over Slovakia’s Andrea Strbova/Natalia Dubovcova.

With the runner-up finish, the Dutch duo snagged their first World Tour medal since joining forces last year. Meppelink/Keizer advanced to the title match with a

Strbova/Dubovcova rounded out the podium with a bronze medal win over Brazil’s Josemari Alves/Liliane Maestrini (Josi/Lili).

“In the first set we made too many mistakes and the Czech guys played very well,” Semenov said. “In the second set we forced more mistakes on them and we began to side-out well and get our block-defense going. We want to play even better so we will keep on working hard together.”

It was the second three-set affair of the day for the Russians, who squeaked past Swiss pair Adrian Heidrich/Mirco Gerson in the three deuce sets in the semifinals to earn their first shot at a podium finish since teaming up in December.

Perusic/Schweiner had an easier road, topping Cuba’s Nivaldo Diaz/Sergio Gonzalez in the semis. With the silver, the Czech pair matches their best FIVB finish, a runner-up effort at the Montpellier One-Star in September.

In the end, Diaz/Gonzalez claimed the bronze with a straight set win over the Swiss. The Cubans earned their second podium finish of the year, following a bronze at the Qinzou Three-Star in October.