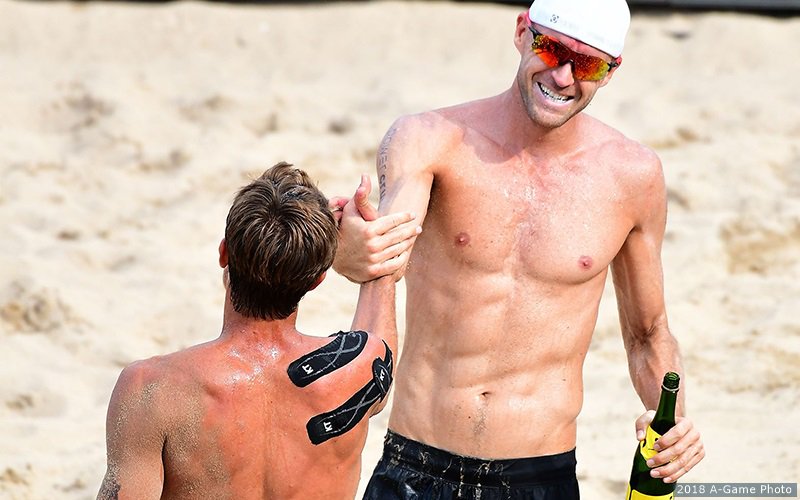 The men fought hard to reach the title match with both semifinal matches going to tiebreak. In the end, it was No. 2 seed Taylor Crabb/Jake Gibb that won the @AVP Gold Series Championships in Chicago, their first title since winning AVP Seattle in June.  Current Photo via AVP

The men fought hard to reach the title match with both semifinal matches going to tiebreak. In the end, it was No. 2 seed Taylor Crabb/Jake Gibb that won the AVP Chicago gold, going 5-1 in the tournament, including a contender’s bracket victory on Saturday. With the win, the pair have qualified for the AVP Hawaii Invitational, Sept. 14-16.

Once in the championship match, Crabb/Gibb put their names on the $25,000 winner’s check with a 21-14, 21-17 win over No. 9 Tim Bomgren/Chaim Schalk. The gold medal marked the duo’s first since winning AVP Seattle (June 24), while the finals appearance was their fourth of the year.

Bomgren hit at a .409 clip with 12 kills and two digs for the runners up, while Schalk notched 13 kills and five digs in the loss. The pair was awarded $17,750 for their second place efforts.

In the second semifinal, Bomgren/Schalk continued their best run of the season since a third-place finish at AVP San Francisco (July 8), hanging on for a 21-17, 19-21, 15-12 win over No. 3 seed Jeremy Casebeer/Reid Priddy.

Schalk was in prime form, following a .741 hitting effort and a 21-kill, 12-dig double-double in the final contender’s match, hitting .543 with his second straight double-double (22 kills, 12 digs). Bomgren supplied 11 kills and seven blocks in the victory.