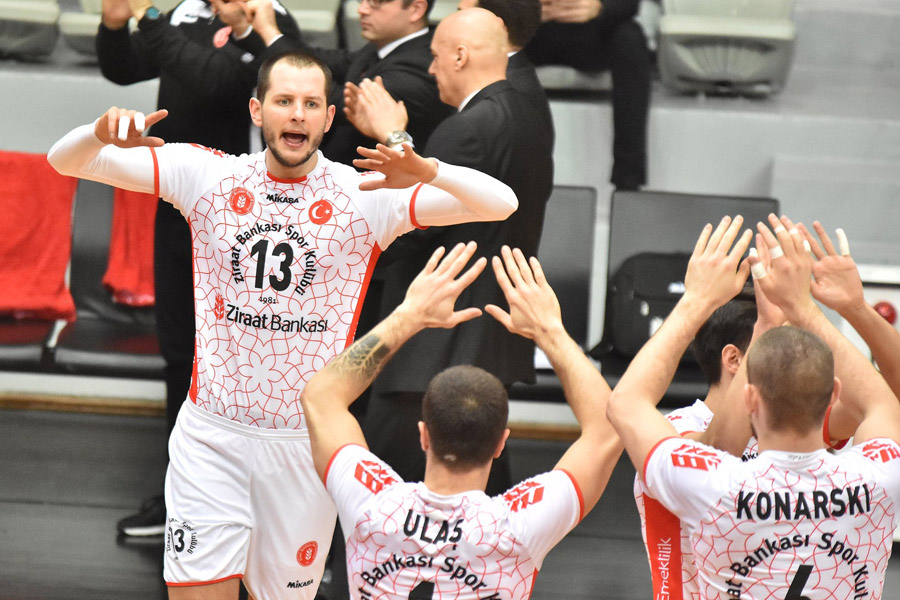 Bartosz Kurek is returning to Poland after spending last season in Turkey with Ziraat Bankasi. Kurek will be suiting up for KPS Stocznia Szczecin in 2018-2019. Current Photo via Ziraat Bankasi

After finishing the Polish PlusLiga regular season and the playoffs in 12th place, KPS Stocznia Szczecin started their attempt at rebuilding for a more successful 2019. On May 21 they announced that they were releasing six players including Jeff Menzel from the United States and Justin Duff of Canada. Rumors started to surface about who would be coming to Szczecin. There were rumblings of Radostin Stoychev coming to coach the team after being ousted at Azimut Modena. Matey Kaziyski, Bulgarian outside hitter, has also been linked with the club along with Bartosz Kurek. On Sunday it was announced that Kurek had officially signed.

Kurek is a 6’9″ (207 cm) outside hitter who has taken up the opposite position since 2015. The physically commanding attacker on the pin has had some poor luck with injuries when he has left Poland. He spent the last season with Ziraat Bankasi in Turkey, finishing the regular season in 4th but winding up in 6th position after the playoffs. Kurek did not play regularly for Ziraat until February due to a foot injury. Injuries plagued his season with Dynamo Moscow in 2012-2013.

Injuries do not define Kurek’s career, and he has won many titles with the various clubs he has represented. Most of those trophies have come with PGE Skra Belchatow. He has won the following trophies with clubs in Poland and Italy:

Kurek has also been a contributing member of the Polish National Team. He has been a part of the team taking part in the Volleyball Nations League, but has been used in a very limited role these past few matches. While being used off the bench lately, Kurek finished the Preliminary Round with 53 points on 44 kills, 7 blocks, and 2 aces. While he was not a part of the team that won the 2014 FIVB World Championships, he has helped Poland win the following:

In addition to Kurek, KPS Stocznia Szczecin acknowledged in a press release that there have been many rumors about more big names arriving at the club. They informed that on Monday they will start to inform the public about the new additions to the team for the 2018-2019 season.