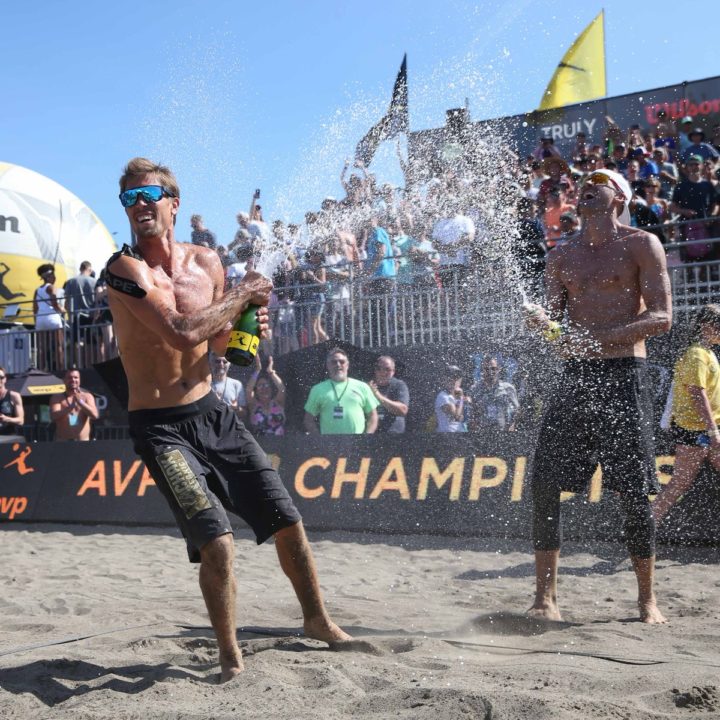 For the first time in 2018, there is a new AVP men's champion as Taylor Crabb/Jake Gibb bested Phil Dalhausser/Nick Lucena for the Seattle gold. On the women's side, No. 2 Emily Day/Betsi Flint came out on top, rallying past No. 3 Caitlin Ledoux/April Ross in tiebreak.  Current Photo via AVP

For the first time in 2018, there is a new AVP men’s champion as Taylor Crabb/Jake Gibb bested AVP Austin and AVP New York City champs Phil Dalhausser/Nick Lucena 21-16, 21-19 on Sunday for the Seattle gold.

Crabb hit at a match-high .579 clip with 15 kills and nine digs. Gibb was all over the court with 12 putaways, including match point, four blocks, two aces and two digs to make up for his five service errors.

Lucena notched 16 kills and 12 digs, but hit .147 for the match with 11 hitting errors. Dalhausser kicked in 14 putaways and a block, but made three service errors.

No. 1 Dalhausser/Lucena moved past No. 2 Theo Brunner/John Hyden (21-15, 21-15). The duo took advantage of nine service errors and 13 hitting errors by Brunner/Hyden. Lucena notched a double-double with 14 kills, 11 digs and three aces, while Dalhausser chipped in 12 kills, three blocks and an ace.

On the women’s side, No. 2 Emily Day/Betsi Flint came out on top, rallying past No. 3 Caitlin Ledoux/April Ross in tiebreak. Day/Flint won 19-21, 21-19, 18-16 in an offensive battle. It took 29 serves in the match-point freeze, which requires teams to serve to score, in order for Day/Flint to clinch victory.

In the semifinals, Day/Flint beat No. 8 Amanda Dowdy/Irene Pollock as each hit over .600 for the match, combining for 40 kills and just three hitting errors. Flint posted 17 kills, eight digs and two aces, while hitting .652, while Day notched 13 kills, five digs, three aces and a block, while hitting .611. Dowdy/Pollock combined for just 20 putaways.

Ledoux/Ross took out No. 1 Kelly Claes/Brittany Hochevar in straight sets 21-18, 21-17. The pair made just five hitting errors in the match, while hitting .500 or better. Ledoux hit at a .542 clip with 17 kills, two aces and a block. Ross added 13 kills, nine digs and three aces.

Claes/Hochevar managed 14 kills apiece, but could not put up a block and served up just one ace in the loss.