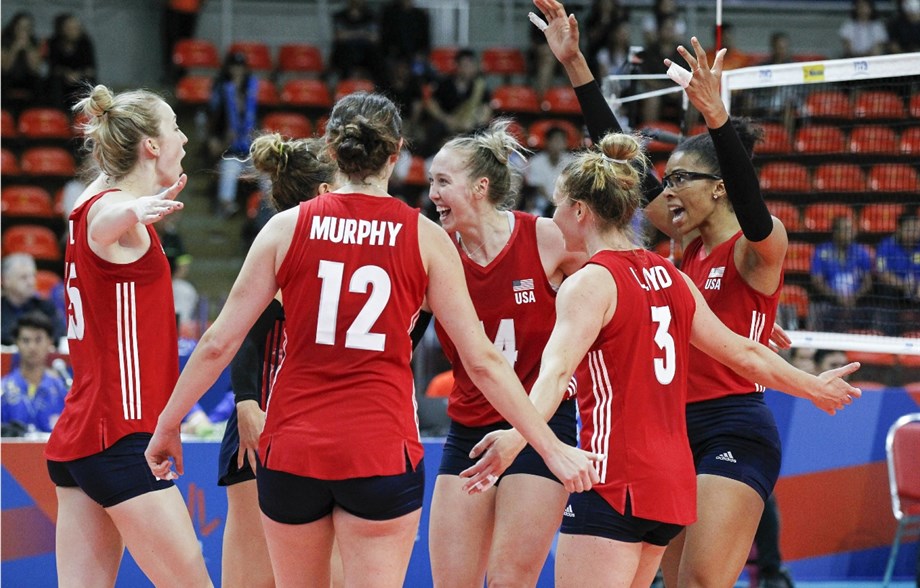 Michelle Bartsch-Hackley and Kim Hill led the way for the United States, topping a group of four double-digit scorers in a sweep of the Dominican Republic on Wednesday.  Current Photo via FIVB

Michelle Bartsch-Hackley and Kim Hill led the way for the United States, topping a group of four double-digit scorers in a sweep of the Dominican Republic on Wednesday.

The Dominican Republic held the advantage late in Sets 2 and 3, but the Americans came through in the end to give Team USA its 13th straight win over their NORCECA neighbors since 2006.

Dominican Republic captain Niverka Marte: “USA are a great team. It was a very difficult match for us today, they’re a very good team. Our goal is to improve every day, and do better than the day before.”

USA captain Jordan Larson: “Congratulations to the Dominican Republic, they really pushed us today. I’m just really proud of our team for just grinding in this tournament. It was a tough game but every day we just try to get better and better. We’re excited to face Thailand tomorrow and in front of their home crowd. The Thai fans are awesome. It’s such an amazing environment to play in.”

USA coach Karch Kiraly: “Congratulations to the Dominican Republic, they played a great game last night against Thailand and they pushed us very hard today. They’re honestly improving; our two programmes know each other very well because we’re from the same zone. If you look at our lineups, we have been trying lots of different combinations; we tried another one today, and we will try a different one tomorrow.”