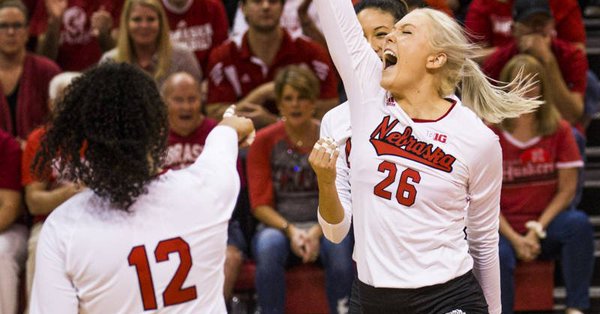 All four ranked teams came out on top via sweep as No. 4 Illinois remained undefeated at 14-0, No. 5 Nebraska won its 12th straight, No. 12 Penn State recorded its first Big Ten win of the year and Michigan stayed perfect at home (9-0).  Current Photo via Nebraska Athletics

All four ranked teams came out on top via sweep as No. 4 Illinois remained undefeated at 14-0, No. 5 Nebraska won its 12th straight, No. 12 Penn State recorded its first Big Ten win of the year and Michigan stayed perfect at home (9-0).

The standout performance of the night came as Nebraska’s Lauren Stivrins went a perfect 10-for-10 hitting at a 1.000 clip, becoming the third player in Husker history to do so with at least 10 putaways.

She is the sixth Big Ten player to do so and just the second to do in a Big Ten match, joining:

Northwestern shot out of the gates in Set 3, building a four-point edge at 8-4 with kills by five different players. Nebraska caught up and took a 13-12 lead of its, own but the Wildcats answered with a 6-1 run to vault ahead 18-14 on an ace by Sarah Johnson. Down 23-20, Nebraska spoiled any hope of an upset with five straight points, including two kills and a block by Sweet, to steal away the 25-23 win.

After suffering their first 0-2 start since 2000, the Nittany Lions bounced back with a road win at Michigan State on Friday, handing the Spartans their third conference loss.

Alyssa Chronowski posted a match-high 10 kills to guide the Spartan offense. Maddie Haggerty followed with nine putaways, but neither hit better than .222 and three players hit in the negative percentages. Nya Gros managed just one kill, but put up a match-leading eight blocks.

After winning the first two sets handily, the Nittany Lions jumped out to a 5-1 lead in Set 3, including an ace by Jenna Hampton. Down 10-8, Michigan State used a 4-0 run including three blocks by Gros, to take the lead at 12-10. PSU worked its way back to a three-point advantage at 19-16 on a kill and a block by Gray. MSU countered with a 5-1 run including two Penn State service errors and two more Gros stuffs. Another 3-0 run, this time by the Nittany Lions followed. After a knot-up at 23, a service error gave PSU its first match point try. Another serving miscues tied it up again, before a Parker kill and a solo stuff by Leath ended the night.

The Illini move to 32-6 all-time against the Hawkeyes in Champaign and 62-14 overall with a quick sweep.

The Illini punctuated the win with a .429 hitting effort in Set 3, while the Hawkeyes also hit at their best clip of the night, managing a .275 effort.

Illinois started Set 3 with a 9-5 run, including three straight kills by Bastianelli. The Hawkeyes narrowed the gap to one at 11-10, but could not break through as the Illini answered with five of the next six points. Iowa called timeout and cut the margin to two at 20-18, forcing Illinois to talk things over. The chat worked as the Illini scored five of the last seven, all on kills, with four different players getting involved. A Louis putaway kept the match going, thwarting the first Illinois match point try at 24-19, before Bastianelli closed out the victory.

Rutgers boasted an 11-7 advantage on the blocks, but Michigan was too strong offensively in a home sweep.

Carly Skjodt put down 15 kills on a .316 hitting effort to go with eight digs and four blocks. Sydney Wetterstrom followed with a double-double (11 kills, 10 digs). Paige Jones chipped in seven putaways and a team-best 12 digs.

The Scarlet Knights jumped ahead 7-3 in Set 3 with help from five blocks, three by Stackhouse. Down four at 10-6, Michigan began its comeback, scoring eight of the next 10 points to surge ahead in 14-12. Three Rutgers miscues and two Cori Crocker kills highlighted the rally. The Scarlet Knights called timeout and managed a 6-2 run of their own to grab an 18-16 edge. After five ties, Rutgers led 23-22, but Michigan closed out the set on a 4-1 run, including two kills and a final solo stuff by Skjodt.