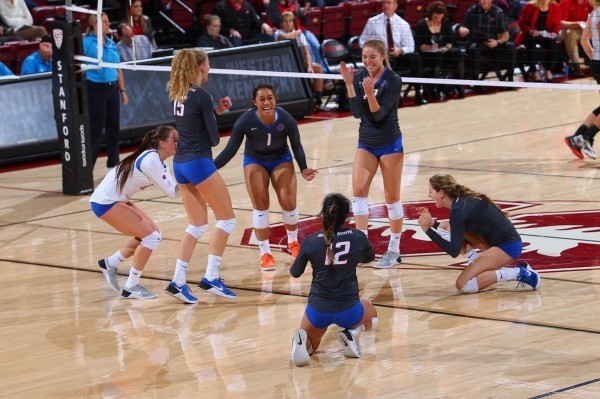 Boise State won its first NCAA tournament match in its first ever NCAA tournament appearance with a First Round victory against the Western Kentucky Hilltoppers. Moreover, the Broncos reached the milestone by sweeping the No. 20-ranked WKU, although all three matches were competitive.

Boise State relied on superb play from Sierra Nobley. She recorded a double-double (17 kills, 12 digs), and also contributed a huge 7 blocks. The blocking statistic is a new career-high for Nobley.

Boise State faces #6 Stanford in the next round, but with only one senior, the Broncos are looking to capitalize on the experience of their first NCAA tournament trip with a young squad.

Despite the loss, Western Kentucky finished its season with 30 wins and only 3 losses. The latter statistic ties the school record for fewest losses in a season.

As a team, WKU peppered 51 kills and hit a .287 percentage for the match, which bettered Boise State in both categories.

STANFORD, Calif. – Sierra Nobley led Boise State Friday night with her 17th double-double of the season on 17 kills and career-high seven blocks, both team highs, as the Broncos swept past 20th-ranked Western Kentucky 28-26, 25-22, 27-25. The match set two first for the Broncos, it was the first ever tournament appearance for Boise State in program history and also the first ever win in the national event.

The Broncos also recorded their second ever win over a nationally ranked top-25 team, both came this season versus Santa Clara in September and today versus WKU. The victory improved Boise State to 26-6 overall, second-most wins in school history, and advances the Broncos into Saturday’s second round against the winner of the No. 9 Stanford vs. Denver contest at 8 p.m. (Mountain).

“I am really excited for the team and with the win in our first trip to the NCAA,” said coach Shawn Garus. “I thought our team did a really good job in handling the pressure and played well throughout.”

On winning the first NCAA Tournament match in program history … “That sounds really good!” said Garus. “I knew Western Kentucky was a good team and that it had a couple of weapons that were going to pose a really tough match-up for us. They still had two really good players scored a lot, but I was really proud that our girls stuck to the task and did not get down at any point, even when we were down two points in the third set. They just believed they were going to comeback and win.”

Nobley scored seven points in the opening set with six kills and two block assists. The opening frame was tight throughout with 17 ties and five lead changes. The largest lead two points by both teams as the set went down to the wire before Boise State eventually put it away in extra points 28-26.

Sabryn Roberts was also a force in the first set recording five of her 11 kills during the period. She eventually finished the contest hitting 32.1 percent, third best on the team.

Boise State trailed 3-1 early in the second set, then rolled off a 6-0 to take momentum up 7-3. The Broncos never trailed again the set and led by as many as five before taking it 25-22.

Nobley and Kaitlyn Oliver combined for 12 kills and three blocks in the final set to lift the Broncos to the sweep. But like set one, the third was a battle that saw 15 ties, seven lead changes and extra points before it was all over.

Oliver match Roberts’ kill total of 11 in the win and added four blocks. The red-shirt junior who leads the Broncos in career hitting percentage finished the contest at 35 percent.

The third went back-and-forth throughout with the largest lead being three by WKU. Trailing 24-22 coach Garus called timeout. The Broncos responded with three straight points to get their first match point at 25-24 on a Jaymee-Lee Bulda dump over the block.

WKU tied it all at 25, before a service error and block assists by Maddy O’Donnell and Janell Walley clinched the victory for Boise State.

O’Donnell, the lone senior on the team, finished the night with four kills, two service aces, three digs and seven big blocks to help the Broncos to the win.

Bulda dished out a 38 assists to direct the offensive attack. The junior setter also had two big kills in the third set before finishing with contest with the pair of kills and eight digs.

Maddi Osburn recorded a team-high 14 digs to increase her school record for a season to 538. Emily Sullivan was the only other Bronco to get in the match finishing with one service ace and six digs.

Western Kentucky finished the match hitting better than the Broncos at 28.7 percent for 51 kills on 48 assists. The Lady Toppers had no service aces, 57 digs and nine blocks.

STANFORD, Calif. – Alyssa Cavanaugh worked to her 19th 15+ kill outing of the 2016 season, recording 17 kills in WKU Volleyball’s NCAA Tournament first-round match from the Maples Pavilion on Stanford’s campus. The Lady Toppers suffered their lone sweep of the season, falling to the Boise State Broncos who earned the Mountain West’s automatic bid into the NCAA bracket.

“This is a disappointing end to the season, but what can you say, this is the first time we’ve lost since Sept. 10,” head coach Travis Hudson stated. “It takes nothing away from the amazing group of kids I’ve had and the incredible season that they’ve had.”

In arguably one of the best NCAA first round matches this season, WKU and Boise State battled in a first set that saw 19 ties and five lead changes before the Broncos claimed a 28-26 decision. The Lady Toppers got on the board first with a quick 2-0 advantage but Boise State battled back. With five timeouts utilized in the frame, both sides were within two points of each other at each break. Cavanaugh led everyone with eight kills in the frame while Rachel Andersonchipped in five.

Boise State marks just the sixth opponent able to take a 1-0 lead in a match over the Lady Toppers this season.

WKU Volleyball entered unchartered territory as it dropped the second set to Boise State 25-22. The Lady Toppers had not trailed 0-2 in any match in 2016 until the NCAA Tournament first round matchup. After Boise State got on the board first, WKU fired back to take a 3-1 advantage. Boise State went on to take a 10-6 lead in the frame to force a WKU stoppage. Out of the break WKU worked back to within 17-19 and forced the Broncos to call for a break. A few points later, Jessica Lucas recorded her 4,000th career assist as Anderson found the floor with her ninth kill of the day.

Third set action wrapped up similarly to the open frame as the Lady Toppers owned a set point up 24-22 but the Broncos found a way back to clinch the match. WKU and Boise State changed leads seven times in the final set and were knotted on 15 occasions. WKU owned a slim 15-14 advantage at the media timeout and continued on to take a 21-20 lead late off of Anderson’s final kill. Boise State called for a stop down 24-22 and scored the next three points to turn the tables. Down 24-25, WKU took a timeout but after tying the set at 25-25 on the next point, the Boise State squad secured the match with the next two points.

Cavanaugh led the WKU squad with 17 kills on the day while Anderson chipped in 13 of her own. The pair put on a show as Anderson hit .500 on 22 swings and Cavanaugh worked at a .342 clip on 38 attacks.

Sydney Engle finished two kills shy of a double-double effort as the junior recorded eight kills in addition to leading the team with 14 digs. She was also one of four Lady Toppers with two or more blocks on the day.

After not tallying a kill in the opening set, Taylor Dellinger posted nine during the second and third sets of play to go along with five digs and four blocks.

Anderson led the WKU blocking effort with five tallies of her own; one solo stop as well as four block assists. Amara Listenbee added three stops of her own.

The WKU offense  recorded a .287 hitting percentage in the match along with 51 kills, registering better numbers than Boise State in both categories.

Lucas finished with 41 assists in the three-set match to go along nine digs, three kills and a block assist.

Kaelin Grimes recorded the second-most digs for WKU with 11 while her fellow senior, Georgia O’Connell, finished with 10.

From the service line, the Lady Toppers went without an ace in the match. This marks the only match in 2016 that WKU did not record a service ace.

WKU Volleyball is now 2-9 all-time in NCAA Tournament matches including a 1-2 record at Stanford. The 2016 squad wrapped up the season with a 30-3 overall record after winning both the Conference USA regular season and tournament titles. Three losses ties the fewest losses by a WKU squad in program history as the Lady Toppers conclude their third-consecutive 30-win season. WKU has won 30 or more matches in six of the past seven seasons.