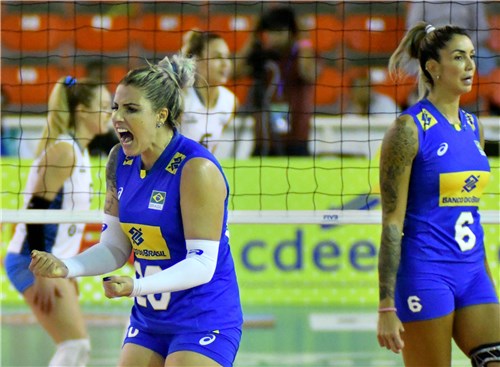 Columbia picked up its second win of the Pan Am Cup, smoking Mexico in a sweep. Meanwhile, Brazil kept its stranglehold atop Group C and punched its ticket to the semis with a five-set win over Argentina.  Current Photo via NORCECA

Dayana Segovia notched a match-high 17 points and the Columbians picked up 23 points on Mexican miscues in an easy sweep on Tuesday.

“We concentrated on a study of Mexico after watching them playing spectacular volleyball against Argentina,” Columbia coach Antonio Rizola said. “Our two main objectives are to improve the technique and then the confidence.”

“You have to pay for your errors,” Mexico coach Ricardo Ponce said. “In the decisive points of the first two sets we failed. That was the difference. We had good moments.”

Elina Rodriguez (17), Paula Yamila Nizetich (16) and Agnes Tosi (11) led the way for Argentina. Rodriguez scored all 17 of her points on kills, while Nizetich managed 15 putaways and an ace. Tosi turned in six kills, four blocks and an ace.

“It was a match as we expected,” Brazilian captain Dani Lins said. “There is a lot of rivalry between these two teams. We served well and had a good volume in defense and blocking.”

Despite the loss, Argentina was pleased with its efforts.

“I think we showed the real level of Argentina,” Nizetich said. “The tie-breaker could have gone either way. They served better and made less mistakes.”

Coach Guillermo Orduna also expressed his pleasure even in defeat.

“We appealed to the experience of some of the players,” Orduna said. “I really give credit to the team effort and their performance. To have a 3-2 result against Brazil is a booster in our confidence.”