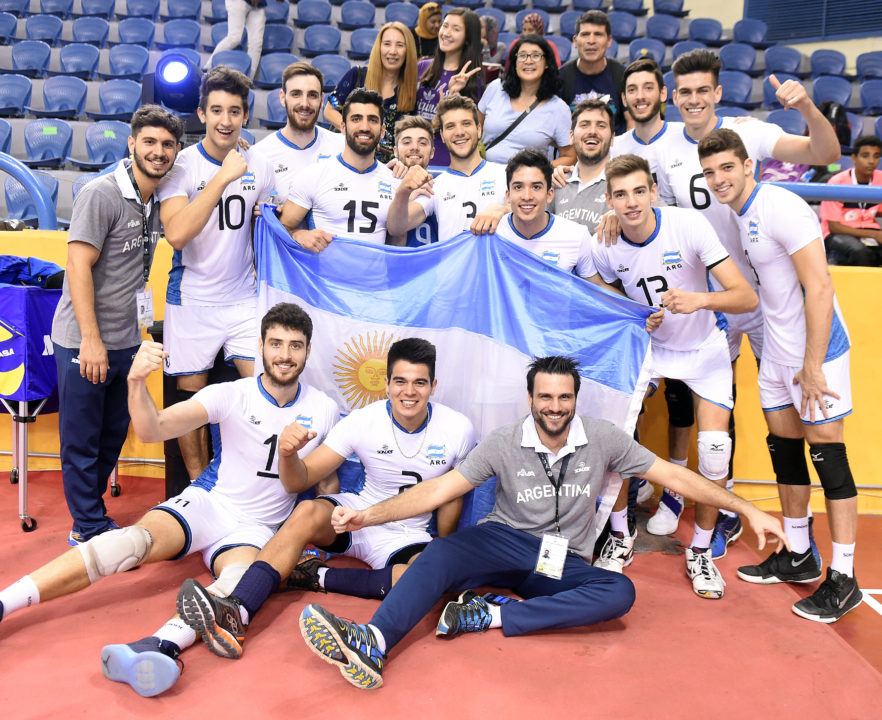 Wednesday was an intense day of action in Egypt, as teams fought desperately to stay alive in the competition. As for the results, undefeated Brazil will meet the defending champions Russia, while Argentina will take on Cuba as the 2017 FIVB Men’s U23 World Championship comes down to semifinals. In Pool A Cuba did away with Mexico 4-1 (15-7, 15-9, 24-26, 15-13, 15-11) to claim the second qualifying ticket behind Brazil who had secured their semifinal spot a day earlier. Brazil themselves, wrapped up their pool play obligations with a 4-0 (15-9, 15-12, 15-7, 16-14) sweep of Japan.

Below, updated pools, game recaps, and schedules after the fifth day of competition:

Douglas Souza finished as his team highest scorer with 9 points, while Jin Tsuzuki led the losers with 10 points coming as the match best scorer. Brazil controlled the action due to their better blockers as they made 8/0 lead in this skill beside their better defensive activity making the match more easy to win.

Brazil coach, Giovane Gávio: “I am very happy today with the performance of my players. Reception was very good and service also was very efficient. We put Japan under pressure and we also did good work in blocking. The semifinal will be a great match, whoever the opponent. We are not afraid of any team.”

Brazil captain, Fernando Kreling: “We try to play our best every time and get best result although we had difficult matches. For the semifinals match, we didn’t know which team we will compete against but we’re not afraid of anybody and we are ready.”

Japan coach Fumitohi Tokunaga: “We lost to Brazil because they had power and speed. Concerning our position in the group we had nothing to do but we must wait and see what happens between Egypt and Poland.”

Japan captain Masaki Oya: “We couldn’t do anything against Brazil – they are a very strong team. Now we must switch our minds to the next game.”

Argentina secured the first of two qualifying spots from Pool B to the semifinals of the tournament with a 4-0 (15-8, 15-9, 15-9, 15-9) sweep of China in only 45 minutes – the quickest match of the tournament thus far. Argentina completed pool play on a 4-1 record. China dropped to 2-3, but will continue to play for positions 5-8 over the next two days.

This is already Argentina’s best ever finish in the history of the competition, after a 7th place in 2013 in Uberlândia and a 6th in 2015 in Dubai. China are taking part for the first time this year. The second semifinal ticket from Pool B will be decided between Russia and Iran in Wednesday’s second match. All matches in Cairo are played under a new scoring system currently being tested: a best-of-seven, 15-point set format.

Gaston Fernandez and Augustin Loser shared top-scoring honors with ten points each as Argentina dominated China in the blocking department with 10 stuffs to 5.

Argentina coach, Camilo Soto: “I think China because they did not have anything to win or lose did not put up much of a fight. We expected it to be a hard match but it
was an easy one. We won in straight sets and that is what we wanted. Now we are waiting for the Iran v. Russia match to know our position in Pool B.”

Argentina captain, Gaston Fernandez: “I am very happy because we played very well and we won in straight sets and we were perfect. We have reached the semifinals and
that was our target.”

China coach, Ju Genyin: “We did not play well at all in this match. We are forming a new team and it is still a young team with no experience and all the teams we have
played against are very experienced ones.”

China captain Xu Zhensen: “It was our worst match in the tournament and we were very slow. We did not take the match seriously, so we lost.”

Cuba booked the second semifinal ticket of Pool A after they upset Mexico 4-1 (15-7, 15-9, 15-13, 15-11). Cuba finished Pool matches with a win- loss ratio of 3-2 at the second position after Brazil who early secured their place at the top of the pool, while Mexico stayed winless at the end of the preliminary round.

Cuba had the upper hand at the first and second sets to win widely both sets 15-7 and 15-9, before Mexico played a great third set as they ended winners in the longest set since the application of the new scoring rules 26-24. Again, the Cuban team made a pressure through the service and blockers to win the fourth and fifth sets and the match 4-1.

Cuba coach, Nicolas Vives: “We won the game but I am not satisfied with the performance. Now I think only of tomorrow’s match, though we don’t know yet which team we will face.”

Cuba captain, Adrian Goide: “I am happy that we won the match and most importantly that we qualified to the semifinals and reached our target.”

Mexico coach, Jose Guevara: “We played well today and won a set with a high performance. This match indicated that we improve from one game to another.”

Mexico captain, Ridl Garay: “I’m satisfied with our performance today, we improved gradually throughout the competition. We met with Cuba a lot and we did our best in front of them.”

Defending champions Russia lost their first match of the tournament, going down to Iran 4-3 (15-11, 12-15, 10-15, 15-13, 13-15, 20-18, 15-11), but knocked the Asians out of the semifinals when they claimed their third set for a 3-2 lead. The result leaves Russia in second place of the final Pool B standings, which sets them up for a semifinal confrontation Brazil, who are now the only undefeated side in the tournament and have topped Pool A.

Argentina, who took advantage of Russia’s loss to finish at the top of Pool B, will meet Cuba in the other semifinal on Thursday. Argentina, Russia and Iran all completed pool play on 4-1 records, but Argentina had 13 points, Russia 12 and Iran 11.

Despite losing the last point of the third set on a red card to go 1-2 sets down and then seeing coach Juan Cichello expelled for the fourth, Iran rallied to tie the game at 2-2 and kept the pressure up until the very end in the fifth. It was a beautiful dig by libero Aleksei Chankchikov followed by a kill by Kirill Ursov off the tips of the hands of the Iranian block and out of bounds on Russia’s first set point that clinched the deal, earning the defending champions their third set and securing their ticket to the semifinals.

Russia had the chance to close the match in six and avoid Brazil in the semifinals, but they blew five match points before Iran forced a seventh on their own first opportunity. It was Russia’s second consecutive seven-setter, after they beat Argentina on Monday, and, at 198, the highest scoring match in the tournament so far bettering Monday’s match by nine points. At exactly two hours of playing time, it was also the longest match so far in the tournament.

Russia coach, Andrey Voronkov: “Our qualification is not good enough because we won only one point despite preparing the team very well and showing a good performance. I think the mistakes were all psychological as the players felt in the seventh set that they will lose so they made unforced mistakes.”

Russia captain, Pavel Pankov: “We played well and did what was needed from us but we were supposed to work harder and we should not have done such easy mistakes.”

Iran coach, Juan Cichello: “I congratulate my team because we were able to beat a strong team and one of the top-seeded teams”.

Egypt continued their magnificent performance to cruise past the struggling Poland team 4-1 (15-13, 15-7, 32-30, 13-15, 17-15). Egypt finished Pool A at the third position with a 3-2 record, while Poland concluded at the 5th position with 2-3 to be eliminated. Egypt’s opposite spiker Hisham Ewais led the match scorers with 24 points, while Konrad Formela led the losers with 18 points.

Poland rebounded back in the second set and came ahead throughout the set using the efficient spikes of  Konrad Formela and Rafal Szymura. Egypt saved two set points before both teams inter into the most exciting phase of the competition as Egypt again saved 12 set points before Ewais spiked for the longest set point 32-30.
Poland improved their defense and reception to win the third set 15-13, before Egypt concluded with a fantastic performance to win the fifth set 17-15 and the match 4-1.
Here are the post match reactions:
Egypt coach, Marcos Miranda: “This was a game life or death. This win allowed us to survive in the tournament and led us to advance to the second round. It was the only solution for our fans, who could not accept that Egypt could be eliminated. I thought that Poland and Brazil were the top level teams in our pool, but Poland faced problems against Japan.”

Egypt captain, Ahmed Deyaa: “Thank God for this win. We played a fantastic game. Today the star was coach Miranda, who told us everything about every play before the game. For the first time I had such a coach. Polish volleyball is a great school. I want thank our fans, who filled the stands and supported us through the matches.”

Poland coach, Dariusz Daszkiewicz: “I congratulate the Egyptian team for their win. They played very well and the crowd made things very difficult for us.”

Poland captain, Marcin Komenada: “Congratulations to Egypt. They played a very good game. This win was very important for Egypt and we tried to do our best, but Egypt was better than us.”

Here are the post game reactions:
Turkey coach, Resat Arig: “We are so happy to end with a victory. We should have performed better in this tournament, but the players made a lot of faults. I congratulate Algeria for their performance. In the next tournament we will come with a better team. We thank the Egyptian Volleyball Federation for the organization which was great.”

Turkey captain, Yasin Aydin: “We started the tournament not so well, but we ended it with a victory. But we did not play well today. We lost two sets because of our faults as we give up easily. Our level was not our best.”

Algeria coach, Salim Bouhalla: “It was difficult at first, but then we were able to control the second and third sets. Afterwards the players’ performance dropped, so we lost easily.”

Algeria captain, Abderaouf Hamimes: “We were happy to be able to perform well in front of Turkey. We have gained a lot of experience and I think next time we will be better.”