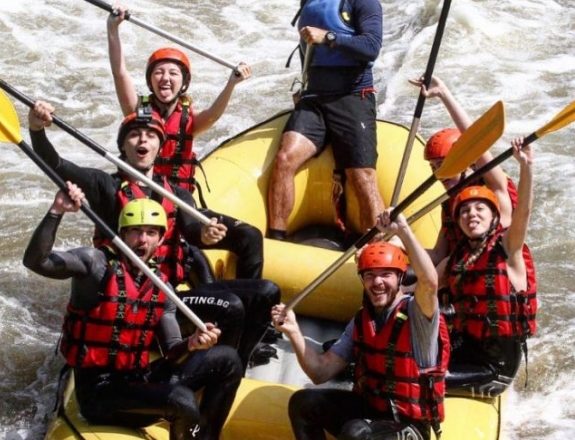 After being left off Bulgaria's Volleyball Nations League roster for Weeks 1 and 2, setters Vladimir Stankov and Dobromir Dimitrov decided to enjoy their rest with a rafting trip.  Current Photo via Sportal.bg

After being left off Bulgaria’s Volleyball Nations League roster for Weeks 1 and 2, setters Vladimir Stankov and Dobromir Dimitrov decided to enjoy their rest with a rafting trip.

Both players were on the country’s preliminary list of 28 players for the VNL, while Dimitrov made the team’s final 21.

The 26-year old took advantage of his downtime away from the gym, joining Stankov and his reported girlfriend Miss Bulgaria 2013 Nancy Karaboycheva on the rafting adventure. Meanwhile, his team was at home in Arena Armeec for a trio of matches with Serbia, Australia and Russia, losing all three contests, falling to Serbia in five sets and Australia and Russia via sweep.

Dimitrov is back in the lineup, however, for Week 3 with the injury to setter Georgi Bratoev. Bulgaria is 3-3 entering the week with matches against Japan, Poland and Italy on tap. The country is one of four challenger teams among the 2018 Volleyball Nations League field alongside Australia, Canada and South Korea.

Dimitrov did not play in the team’s Friday sweep of Japan in Osaka.

Dimitrov joined the Bulgarian national team in 2012, competing with the squad at the 2012 Olympics in London.