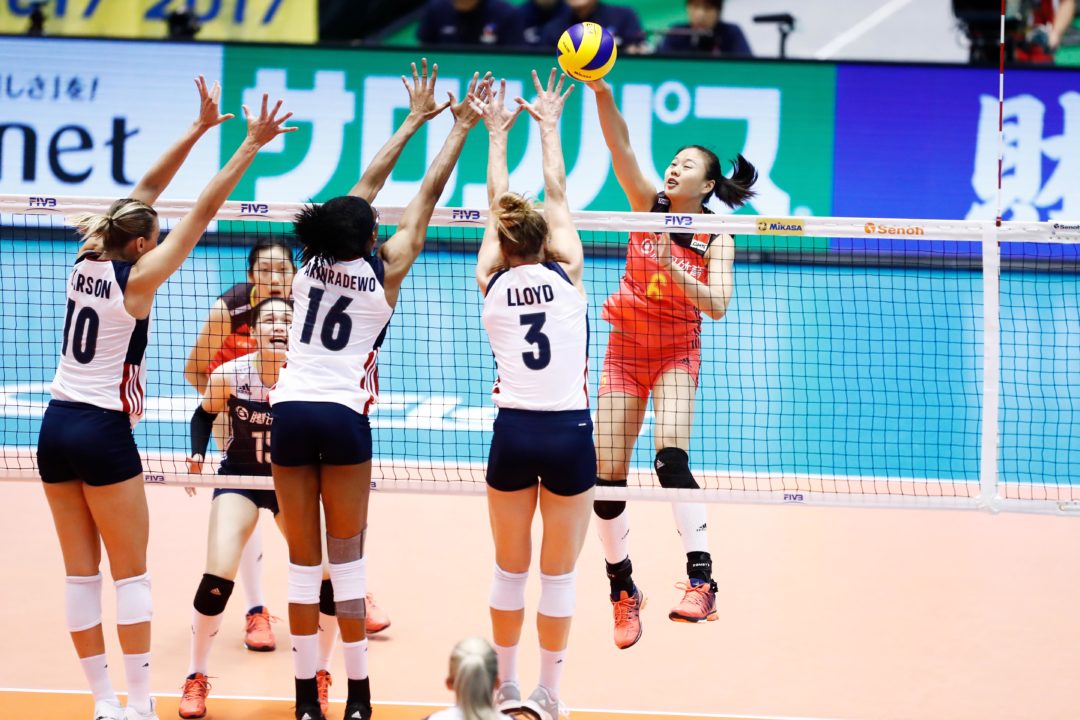 The first day of competition in Japan was full with excitement. As expected, Team USA played very well, but didn’t have enough firepower to contend with tournament favorites China, who was led by the world’s arguably best player, Ting Zhu.

On the other game of the first round of play, Russia inexplicably started its game against Brazil with Tatiana Kosheleva, Irina Fetisova, Ekateria Kosianenko and Nataliya Goncharova on the bench! Has coach Vladimir Kuziutkin forgot that this is a round robin tournament? Or was he totally disrespectful at judging his opponent’s prowess?

Below, you will find complete recaps and videos from all of the day’s action.

Ting Zhu delivered a strong performance on offence and defense as she led China to a 3-1 (18-25, 25-18, 25-14, 25-17) win over USA. Zhu topped all scorers with 21 points, including 16 attacks and four blocks and an ace. Three more players – Zhang Changning, Yuan Xinyue and Zeng Chunlei – scored in double figures to contribute to the Chinese offence with 18, 14 and 13 points, respectively. Rachael Adams, Foluke Akinradewo and Jordan Larson scored 13, 12 and 11 points for USA, but it was not enough to outplay the Chinese side, which ruled with 56 attacks, 14 blocks and seven aces. China now has a 3-1 historic edge in victories over USA in the World Grand Champions Cup. China won the first two meetings in 1993 and 2001, followed by USA’s victory in 2005.

Chinese coach An Jiajie: I am happy that we won and I appreciate the efforts of my players and the staff. We did not do well in the first set because our attacking was bad. We made adjustments in the second set and we responded well against USA. Our seasoned players bring stability to our line-up, that is why we try to always include them.

Chinese captain Ting Zhu: It was good to win and be able to communicate with my team-mates well today. We overcame our challenges one by one. We will continue to work this way.

Chinese player Zeng Chunlei: We should not be satisfied or complacent with this victory. The six members of the USA team were not at their best today. So we should focus on our shortcomings and move forward.

USA captain Carli Lloyd: We have a lot of work to do to become competitive in this tournament. We did not play like we can today. We have to be better from now on.

Tandara got Brazil off to a good start with a 25-17 opening set win, but Kosheleva’s entry to Russia’s starting line-up helped them to break even at 25-23. Brazil gained a 2-1 set edge on a terrific 25-23 come-from-behind win as they imposed solid defence on Kosheleva and Goncharova. Russia’s game immensely declined, while Brazil employed well-organised plays to win set and match 25-12.

Brazilian coach José Roberto Guimaraes: The third set was key today. We were in a difficult situation trailing Russia at 23-19, but it was war from there and we were able to win. We both have young players and Russia have two great receivers. What is important here is that our young players get experience and polish their skills.

Brazilian captain Natalia Pereira: It was good that we could win and get the three points. We need to improve as we gave too many breaks to Russia. We have to improve on our defense and service in the coming matches.

Russian coach Vladimir Kuziutkin: I think the scores says it all. The third set was the difference. If we won that it would have been more interesting. We have many young and must move forward with them in each match. I don’t just think about six players going into a match, I think about all 14. It can be difficult with young players, but I try to use them all to give them experience.

Russian player Tatiana Kosheleva: We did not expect this result today. We had good points and good sets, but in the end Brazil won. We just have to be patient in our next matches.

Rika Nomoto guided Japan to a 3-0 (25-23, 25-21, 26-24) win over their continental rivals Korea. Nomoto’s double-digit output for Japan in the opening set led to an 18-point finish, which included 17 attacks and a block. Mami Uchiseto and Risa Shinnabe added 13 and 12 points, while their setter Koyomi Tominaga also contributed in scoring with 5 points. Ha Hyejin and Lee Jaeyong led Korea with 20 and 16 points in the losing effort. Japan have won their opening game in the World Grand Champions Cup in six of the previous seven editions, with the five-set loss against Poland in 2005 as the only exception. Japan have extended their perfect record over Korea in the tournament to five wins.

Nomoto performed solidly in the tightly contested first set, but Korea countered well to grab the lead at 22-21. Korea continued to fight in the succeeding sets, but Tominaga helped them run clutch plays that ensured match victory.

Japanese player Rika Nomoto: We were determined to win today. I was aggressive in attack so that we can score more points, but by doing this, I held the team back in defence.

Japanesecoach Kumi Nakada: This opening game was nerve-racking. We were not in great condition, but it’s good that we won and got the three points. It was good that we did not allow Korea’s great service game to disrupt our plays, but we have room for improvement on our attack efficiency.

Japanese player Risa Shinnabe: This was an important match to win. We were nervous because it was the first match. We will prepare for our match tomorrow and do whatever we can to win.

Korean coach Hong Sungjin: Japan are solid in basics. They have agility, quickness and great technique, but today I thought they played a little bit slow – that is why we played well against them in each set.

Korean captain Kim Su Ji: Our team has a lot of young players and they played more actively than we expected. This was a great experience for us. Japan’s basic skills are very solid and they are always well-prepared.