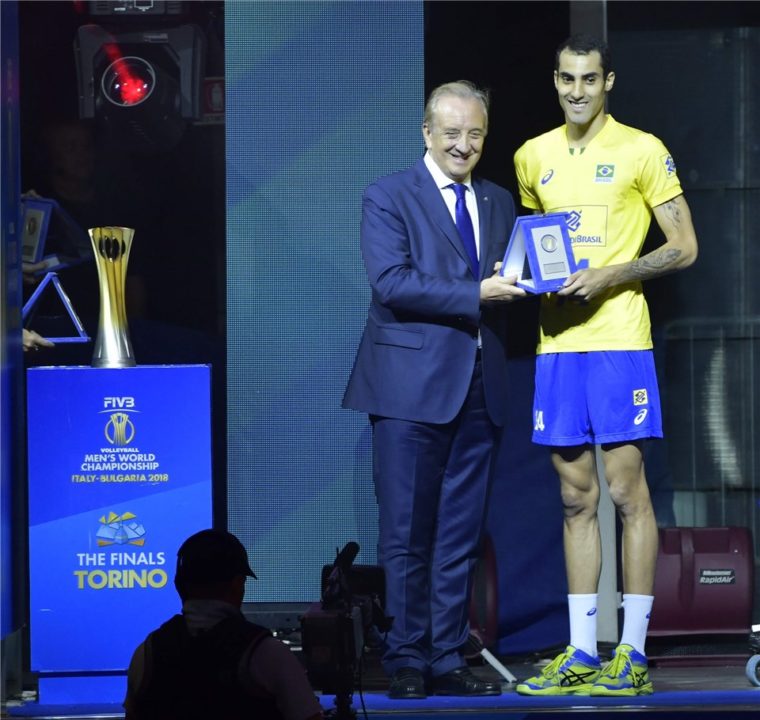 Taubaté is stacked at the outside position Current Photo via FIVB

Team USA took Kim Hill, Jordan Larson, and Michelle Bartsch-Hackley to this year’s WCH, with Michelle, current VNL MVP, riding the bench. However, the American squad is not the only team in the world stacked at the outside hitter position. Brazil’s Taubaté is at a very similar conundrum, with a roster that has in it Ricardo Lucarelli, Facundo Conte, and Douglas Souza.

Lucarelli is a no brainer for the position, as he is one of the premier players in the world at the outside, and current Grand Champions Cup MPV. The other clear choice for the starting line up would be the Argentinian Conte, who is transferring out China, and who was one of the team’s biggest off-season signings and must have cost the team a fortune. He also must enjoy some prestige with the team’s Argentinian coach Daniel Castellani as well.

However, it just so happens that one of the team’s low-key signings during free agency, Douglas, who at first was the clear choice to ride the bench behind Lucarelli and Conte, just erupted for Brazil during the WCH, taking home a spot in the competition’s Dream Team at the outside after leading his squad to a silver medal finish. He was the team’s best player during the competition, topping the stats charts in scoring and reception efficiency. Douglas was just the fourth outside hitter in the team’s depth chart, but was thrown out in the spotlight after Brazil got riddled with injuries. Still, he delivered a masterful performance, and how could a team let a WCH Dream Teamer start games on the bench? Indeed, he knows his status has changed within the team:

“Of course, status changes. The national team gives you that. Regardless of anything, it always comes down to who performs better on the floor. I have much to improve. I have to evolve every game as much as I can.”