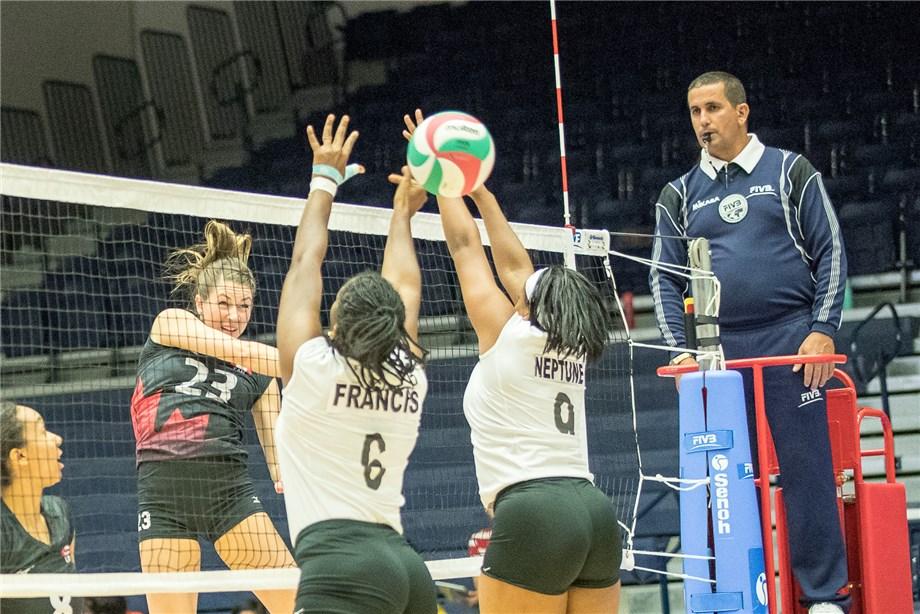 Canada and Cuba will face off on Saturday for bragging rights and the top spot in the qualifier. St. Lucia and Nicaragua will play as well. Current Photo via FIVB

Canada and Cuba will face off on Saturday for bragging rights and the top spot in the qualifier. St. Lucia and Nicaragua will play as well.

Cuba served up 13 aces, five by Laura Beatriz Suarez Hernandez, and outdid St. Lucia 32 to 11 in kills in the sweep. The Cubans also benefitted from 27 St. Lucia miscues in the win.

“Our main goal here is to develop our players for competition,” Cuban coach Wilfredo Robinson Pupo said. “Some are very young and we’re hoping to give them experience. ….  Tomorrow’s match (vs Canada) will be a tougher match and a very exciting match for the volleyball fans watching.”

Yosherbel Emmanuel was the top scorer for St. Lucia with four points, all on kills.

Our passing was better than yesterday, but we were unable to execute because Cuba is a bigger and stronger team than us,” St. Lucia captain Cindy Wilson said. “We blocked a lot of balls. We got a hand on the ball a lot more today, but we still need to work more on our defense. We are very excited to play Nicaragua tomorrow, because right now we have nothing to lose, and just need to go into tomorrow and enjoy the game.”

“I think we’ve been working towards Cuba for the last month and a half,” Canadian Kyla Richey said. “We knew that these were two games (against St. Lucia and Nicaragua) we had to win before we got to Cuba.  We just need to stay aggressive and take the energy of the home crowd in the match tomorrow. It’s so awesome to be playing in front of a home crowd and we want to show our fans some competitive volleyball.”

Amalia Valeska Hernandez Garcia was the leading scorer for Nicaragua with six points, on five kills and a block. Lolette Eleonor Rodriguez Saunders put up two of the team’s three blocks.

“Even though we lost today, I feel our team gave their best and we had a good match against a high level team,” Nicaraguan captain Claudia Noguera said. “For Nicaragua it’s important to play with high level teams because we’re preparing for the Central American Games in December. Tomorrow we expect to play a better game and win the match.”