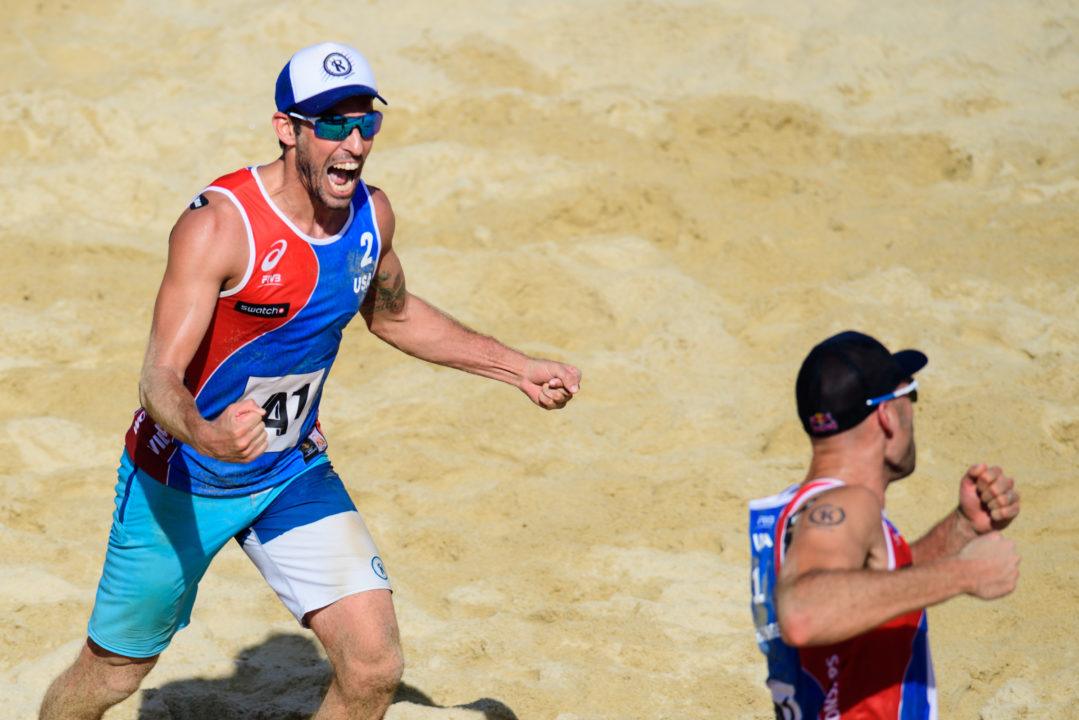 Nick Lucena (left) celebrates with his teammate Phil Dalhausser (right) after the two finish off their win over Australia. Current Photo via FIVB

The men’s FIVB Beach Volleyball World Championships continue to provide phenomenal, competitive battles on the beach in Vienna. The latest was a match for the ages between America’s Phil Dalhausser/Nick Lucena (#3 seeds) and Australia’s Christopher McHugh/Damien Schumann (#35 seeds).

After the United States routed their counterparts in the first round, Australia fought back to win the 2nd and then force the 3rd set to extra points. The Americans would eventually prevail though 2-1 (21-14, 19-21, 16-14).

Statistically, there wasn’t a big difference from a lopsided first set to the more competitive second and third sets. After the Americans came out of the gate hot in the opener, however, it was Australia who got to the early lead – largely on the strength of Damien Schumann’s service.

Chris McHugh made a lot of mistakes in the first set, but as he heated up in the second and third, it took until late in the third set before the Americans decided to attack Damien Schumann instead.

Likewise, the American serve slipped in the 2nd and 3rd sets, allowing the Australians to get into a rhythm.

After trailing for most of the third set, however, Team USA decided they were going to force Schumann to beat them. A key Dalhausser block at 14-14 gave the Americans the lead, and another sealed the match and sent the 10,000-strong crowd into a frenzy.

The United States has advanced to the Quarterfinals and will play Viacheslav Krasilnikov/Nikita Liamin of Russia. Australia has been eliminated and finishes 9th.