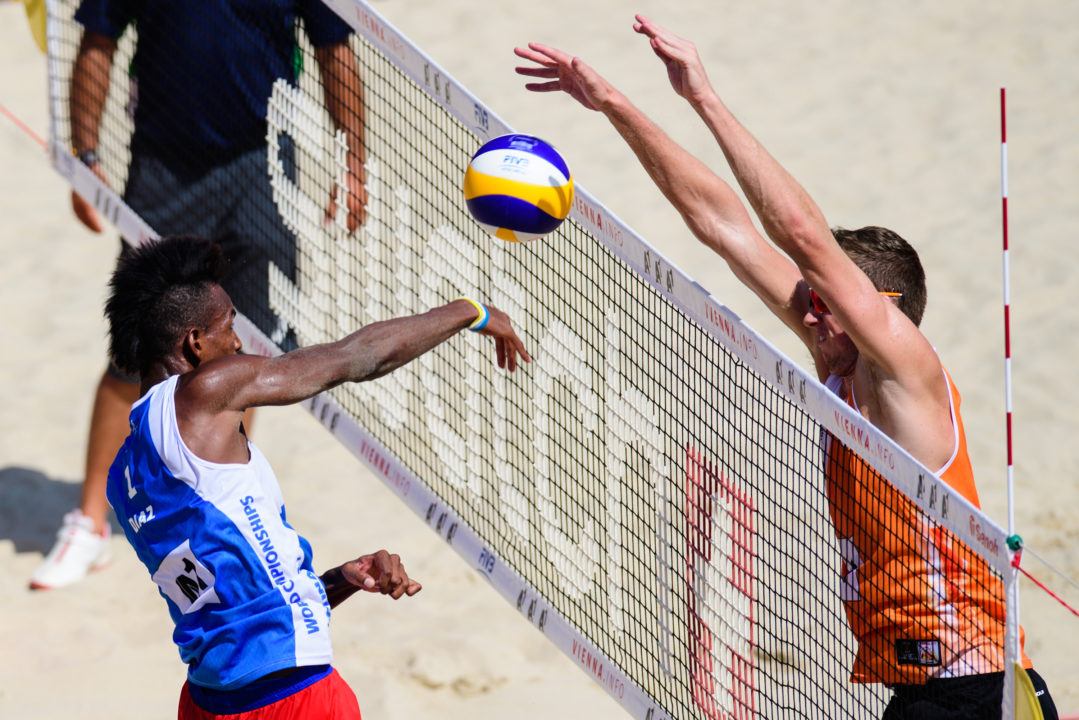 The lowest seed remaining in the tournament is No. 45 Dutch side Christiaan Varenhorst and Maarten van Garderen, who made their way to the quarters with a win over Cuban Olympians Nivaldo Diaz/Sergio Gonzalez.  Current Photo via FIVB

Upset was the word of the day as the four lower seeds won and two top-five seeds fell in the men’s Round of 16. Five of the eight Round of 16 matches went the distance in close three-set affairs.

Defending Olympic gold medalists and world champions Alison Cerutti and Bruno Schmidt and No. 2 seed Janis Smedins and Aleksandrs Samoilovs were the most notable to fall victim to underdogs in the competition.

Canada’s Ben Saxton and Chaim Schalk, the No. 13 seed, eliminated No. 5 seed Alison/Bruno Schmidt in a tight 19-21, 21-19, 15-13 match. Bruno pounded down 28 kills and Alison put up six blocks as the team outdid the Canadians in nearly every facet. However, in the end, the Brazilians committed 14 errors in the match to just eight for Canada.

“We stayed strong,” Saxton said.  “We didn’t let them get a big rally against us. This is up there [for biggest victories]. This is our second time in the quarterfinals at the world championships, and they are the reigning Olympic champions. This feels awesome, but we are already focused on the next one. We just beat the team with the most experience in a high-pressure situation, and if we can beat them, we can beat anyone.”

Another big upset came outside of the top 12 as No. 45 seed Christiaan Varenhorst and Maarten van Garderen defeated Cuba’s Nivaldo Diaz and Sergio Gonzalez, which boasted the No. 24 seed and finished fifth at the 2016 Olympics. Ten blocks, six aces and 10 Cuban miscues aided the Dutch in the upset. Varenhorst scored a match-high 24 points, with 11 kills, all 10 stuffs and three aces. Gonzalez put up 18 kills and five blocks for the Cubans, but it was not enough to stop the upset.

“I think we had a great game plan with excellent work from this guy (teammate Maarten van Garderen) and the start went really well for us,” Varenhorst said. “I think the first switch was 6-1 so from there on we could play really comfortable. In the second set they became better and more aggressive. We had one or two match points and unfortunately we didn’t take it. In the end we kept on going, kept on fighting and we won.