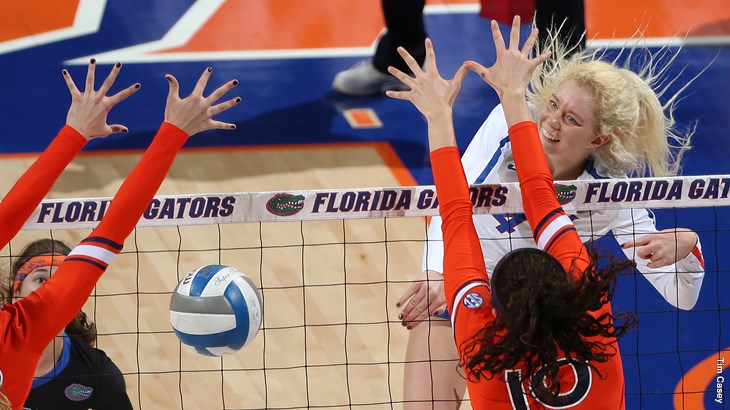 All 4 favorites, including #2 seed Florida, won on the opening day of the NCAA tournament, leading to a predictable tie at the top of the bracket challenge standings. Archive Photo via Florida Athletics

The first day of the 2017 NCAA Women’s Volleyball Championship has completed, and with no real upsets (either by seed or expectation), the majority of the entries in the VolleyMob Bracket Challenge still have a perfect score. 81 out of 117 teams picked Miami, Florida, Utah, and Purdue to advance to the 2nd round of the tournament, and they all did so with relatively-little challenge.

That included Miami ending the season of the CAA champions College of Charleston; the setup of a Florida-versus-Miami intra-state rivalry matchup; and a good 2nd round showdown between a pair of streaky teams in Utah and Purdue. The Utes and Boilermakers have faced 3 times in their history, with Utah winning 2 of those. Purdue won the last matchup in 2008, but a year prior, when the Boilermakers were ranked 17th in the country, Utah won 3-2.

Below, see the standings for the bracket after 1 day of competition, and click the links on the sidebar for more updates on this year’s NCAA tournament.