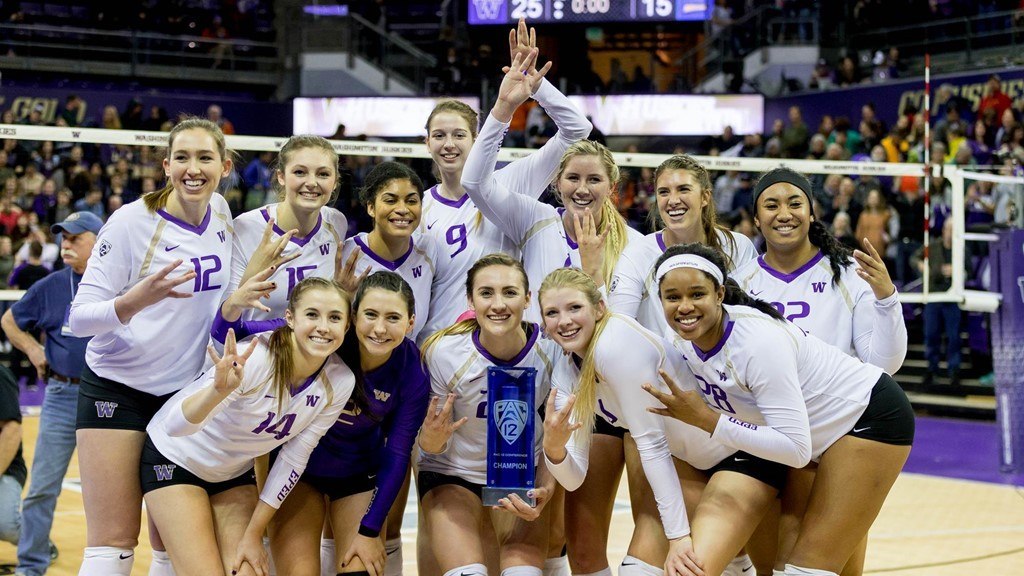 The Washington Huskies, currently ranked No. 3 in the country in the preseason AVCA poll, were picked as the favorite to win the Pac-12 title as voted up by the league's coaches.  Archive Photo via Washington Athletics

The Washington Huskies, currently ranked No. 3 in the country in the preseason AVCA poll, were picked as the favorite to win the Pac-12 title as voted up by the league’s coaches.

The Huskies, which finished 29-5 in 2016 and won their second straight Pac-12 championship en route to an Elite Eight appearance, return 12 players, including All-Americans and All-Pac 12 selections Crissy Jones and Courtney Schwan. All-Pac 12 setter Bailey Tanner also is back.

The stacked roster, plus a trio of freshman and Oklahoma transfer Marion Hazelwood,  kicks off its 2017 season at home vs. Pittsburgh, Saint Mary’s and Creighton.

Defending NCAA champions Stanford came in second in the voting with 113, just five behind Washington’s 118 point tally. No. 18 Oregon was third with 93 points.

No. 2 Stanford, which is in its first season under Kevin Hambly after the retirement of Hall of Fame Coach John Dunning, returns five starters from the 2016 team, which won the National Championship. The Cardinal went 27-7 en route to the title and the No. 1 spot in the final AVCA poll as well as a second place finish in Pac-12 play. Kathryn Plummer, the reigning Pac-12 Freshman of the Year, Merete Lutz and Audriana Fitzmorris are back after claiming All-America honors in 2016.

The league’s coaches also selected a 14-member Preseason All-Pac-12 team. Nine honorees were All-Pac-12 selections a year ago, including Plummer and Schwan, the reigning Pac-12 Player of the Year.

Stanford led the way with four selections as Fitzmorris, Lutz, Plummer and defensive specialist Morgan Hentz were so honored. Washington and Oregon checked in with three selections apiece. Schwan, Jones and Tanner garnered accolades for the Huskies, while outside hitter Taylor Agost, middle blocker Ronika Stone and opposite Lindsey Vander Weide represented the Ducks.

Also back from the 2016 All-Pac-12 team were Oregon State outside hitter Mary-Kate Marshall, USC outside Khalia Lanier and Utah’s Adora Anae.