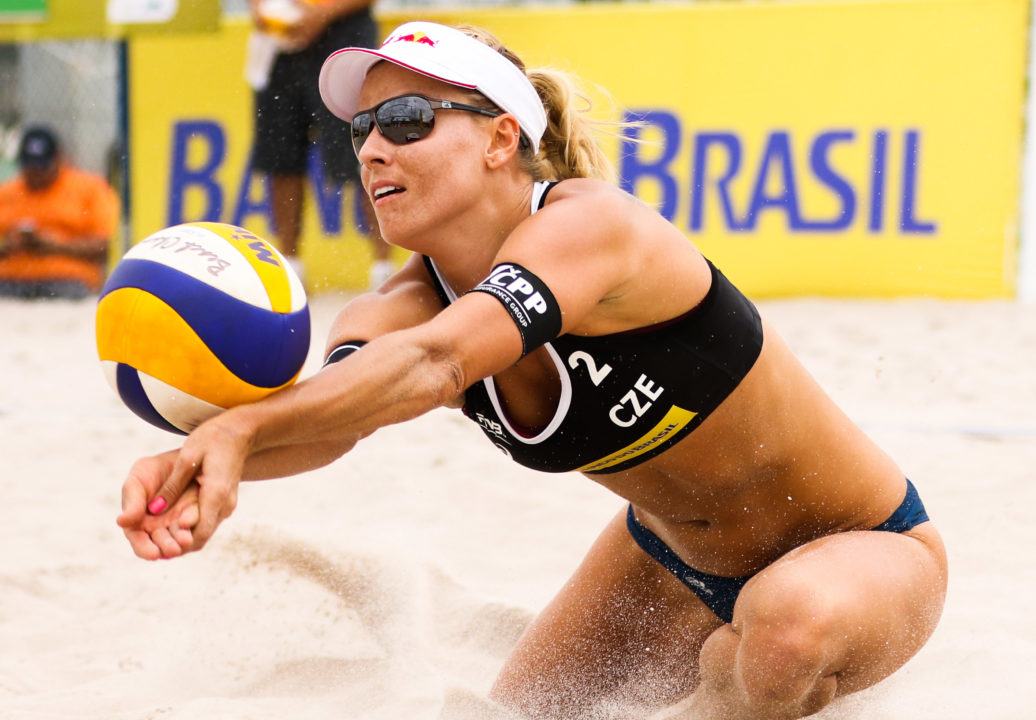 An injury suffered at the Olsztyn stop of the World Tour forced the Czech pair out of this week's European Championships. Archive Photo via FIVB 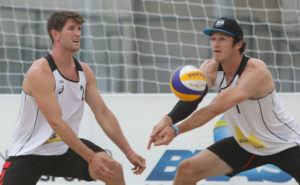 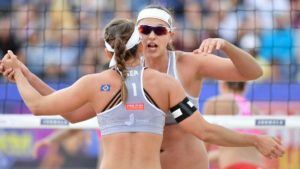 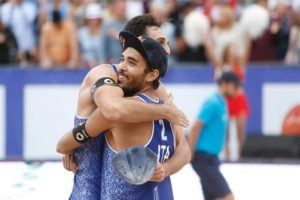 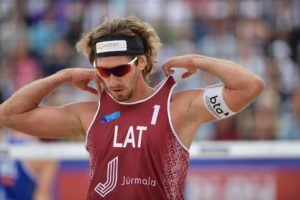 European Beach Volleyball Finals Will Broadcast In Over 110 Countries

Aleksandrs Samoilovs (above) of Latvia will play in the men’s final on Sunday afternoon. 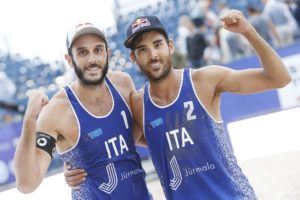 The defending silver medalists at the annual CEV European Beach Volleyball Championships, Czech Republic’s Marketa Slukova and Barbora Hermannova, have had to withdraw at the last minute. Slukova has been dealing with a back injury since the FIVB World Tour event in Olsztyn, Poland, the same one where Kerri Walsh-Jennings injured her shoulder, and after a 9th-place finish at the World Championships, the pair have decided it’s time for a break.

Their replacements in the tournament, which begins Wednesday, is Karla Borger and Margareta Kozuch of Germany – given the German women 5 teams in this year’s tournament. Borger won bronze last year with then-partner Britta Buthe. Because of the late entry, Borger and Kozuch will take over the Czechs’ #2 seed in the tournament.

That group of 5 includes the reigning World, Olympic, and European Champions Laura Ludwig and Kira Walkenhorst, who completed their two-year grand slam last week in Vienna with a World gold. The two are the two-time defedngin European Champions, and have medaled at 4-straight events. Ludwig has a total of 4 European Championships to her credit – having won in 2008 and 2010 with then-partner Sara Goller. Germany is the most decorated nation in women’s European volleyball, having won 7 golds and 20 total medals in the 23-year history of the tournament.

Just like at Worlds, though, Ludwig and Walkenhorst are still working their way back up the seeding after they missed most of the early season while Ludwig recovered from shoulder surgery. They are only the 7th seed in this year’s tournament, which will mean big early tests. 3 of their German compatriots are seeded better, included top-seeded Laboureur/Sude.

On the men’s side, which has somewhat less international cache than the women’s side, Poland’s Bartosz Losiak/Piotr Kantor are the top seeds, while the defending (and overall two-time) champions Paolo Nicolai and Daniele Lupo are the #2 seeds.

Germany is also the winningest nation on the men’s side of this tournament with 5 gold medals (12 overall), but they haven’t put a pair on the podium since 2012, and with their highest team Schumann/Thole seeded just 14th, it will be a stretch to see them there again this year.

The Europeans took 3 of the top 4 spots at the World Championships 2 weeks ago. Clemens Doppler/Alexander Horst took 2nd, boosted by a home crowd; Russians Viacheslav Krasilnikov/Nikita Liamin placed 3rd, and the Cinderella team Maarten van Garderen/Christiaan Varenhorst from the Netherlands placed 4th – in spite of only being seeded 45th. The latter of those pairs hasn’t qualified for this tournament, and are just 13th on the reserves list – though after their performance at the World Championships should qualify for the main draw in next year’s tournament.

The home nation will have a strong contender to cheer for on the men’s side: Aleksandrs Samoilovs/Janis Smedins are the #4 seed on the men’s draw. The pair were the 2015 champions and were 2nd in both 2013 and 2014.

They’ll bring excitement to the 3,300-seat stadium on the beaches of the Baltic Sea.

Teams were drawn into 8 pools of 3 pairs each. The top team in each pool automatically advances to the 2nd round of the knockout stage, while the 2nd and 3rd place teams in each pool will play an early elimination round. From there on, 6 rounds of knockout competition (with gold and bronze medal matches) will be played to determine the finish order.