Denis Kaliberda Back in Italy With Modena 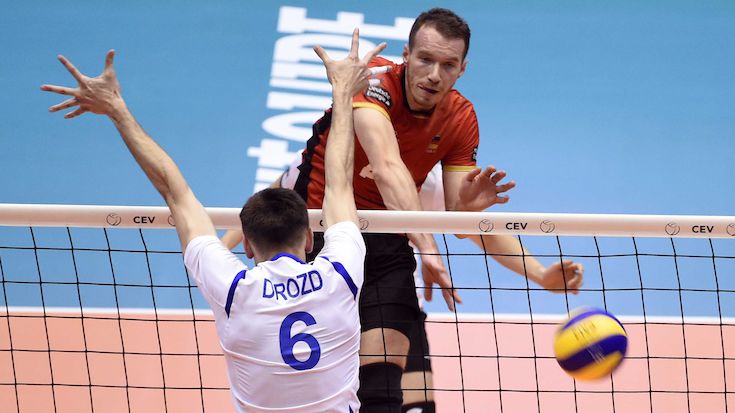 After spending the past season in Turkey, Denis Kaliberda will be going back to Italy. Winnter of the 2017 Coppa Italia and SuperLega, Kaliberda will be headed to Modena to meet back up with Micah Christenson. Current Photo via German Volleyball Federation

German outside hitter, Denis Kaliberda, is no stranger to success in Italy. After a year away in Turkey with Ziraat Bankasi Ankara, Kaliberda is going to meet back up with his former setter, Micah Christenson, at Azimut Modena. Kaliberda and Christenson were teammates at Lube Civitanova during the 2016-2017 season when they won the Italian SuperLega, the Coppa Italia, and won a bronze medal at the CEV Champions League. This is a huge acquisition for Modena, who needed another outside hitter to play opposite of Tine Urnaut.

Modena had well-documented turmoil throughout this season. They finished in 3rd place in the Italian SuperLega and were eliminated by Lube Civitanova in the semifinals of the playoffs. This led to them releasing Radostin Stoychev, their coach, losing Bruno Rezende, and Earvin N’Gapeth. They became busy since the end of the season in order to assemble a team that can compete for the Italian and Champions League titles. In addition to Christenson and Kaliberda, Modena have signed Simone Anzani, Salvatore Rossini, and Ivan Zaytsev.

Kaliberda’s last season at Ziraat Bankasi Ankara saw his team finish the regular season in 4th place. They lost in the quarterfinals of the playoffs to Istanbul BBSK. They reached the finals of the 5th place playoffs, but lost to Maliye Piyango. While his titles with Lube were previously mentioned, Kaliberda won a Coppa Italia with Copra Elior Piacenza back in 2014. He also won the German Cup with Generali Unterhaching in 2010 and 2011.

Denis Kaliberda has also earned success with the German National Team. He was the starting outside hitter for the German tea that won the bronze medal in the 2014 World Championships. He also has a silver medal from the CEV European Championships in 2017. Kaliberda was named the Best Outside Hitter in that tournament as well.