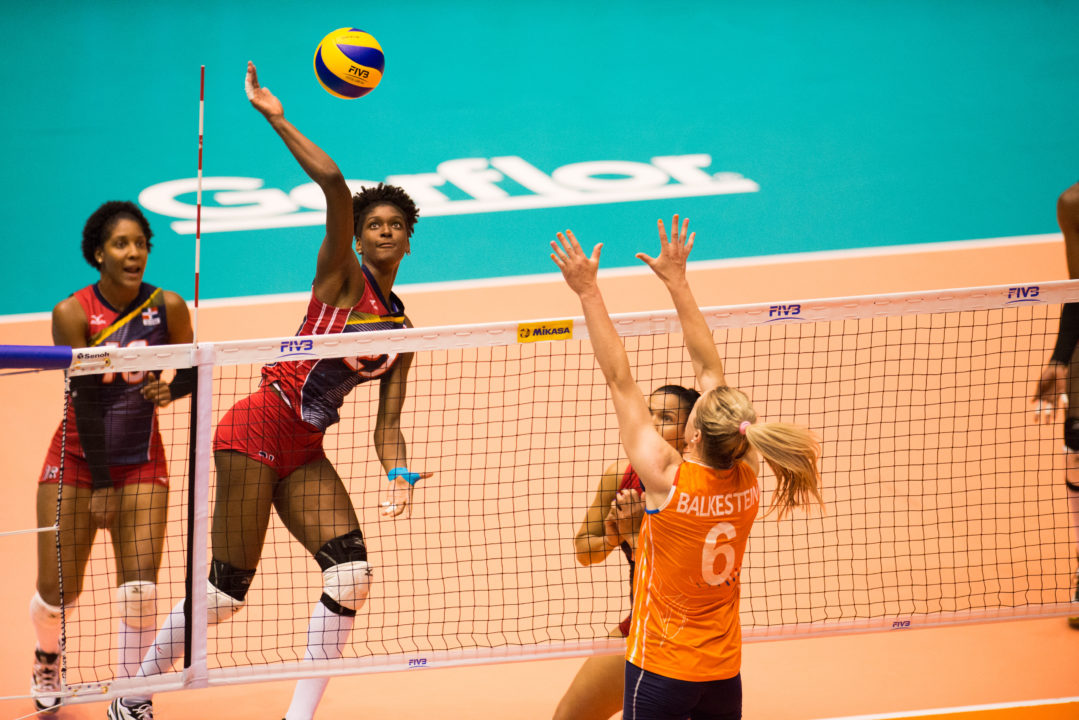 Jineiry Martinez (21, spiking) had to be helped off the court late in her team's 3-0 loss to Italy on Thursday. Archive Photo via FIVB

Jineiry Martinez, sister of top Dominican Republic player Brayelin Martinez, left Thursday’s match at the 2018 FIVB Women’s Volleyball Nations League with an injured ankle, having to be helped off the court by a trainer. The 6’3″ middle blocker, who played professionally with Mirador in the domestic Dominican league last season, had 5 points on 3 kills and 2 blocks when she left the match.

The 20-year old Jineiry, younger sister of the more-heralded Brayelin, still has a rich international resume that includes playing in the 2014 World Championships when she was just 16 years old. She played with Mirador at the 2015 FIVB Club World Championships and in the 2015-2016 CEV Champions League with French side Rocheville Le Canet.

All-told, Jineiry has 74 points through the first 12 matches of the Nations League, which ranks her 3rd on the team and 62nd overall in the tournament. She also ranks 3rd on the team with 13 blocks.

She was replaced in the match by Candida Perez (who was on the bench after starting the first two sets) and did not return. n indication has been given about her status for the final week of play next week. With the Dominicans in 14th place out of 16 teams, formally eliminated from Final 6 contention but safe from falling into the relegation playoff, they will likely exercise caution when they travel to Walbrzych, Poland to play Russia, Poland, and Japan next week.