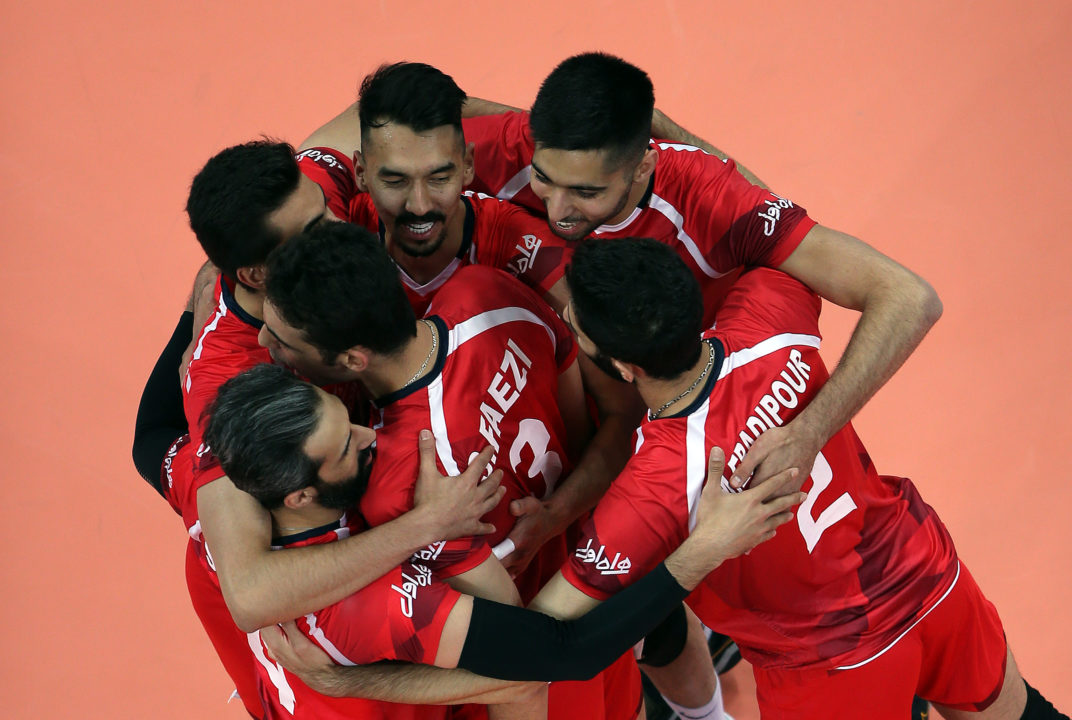 Iran snapped a two-match losing streak with a dominant sweep of China, including 13 blocks.

The Iranians held the advantage in every facet of the game, leading in kills (41-33), blocks (13-6) and aces (5-3) and grabbing 17 points on Chinese miscues, while committing just 11 errors of their own.

Amir Ghafour led a group of three double-digit scorers for Iran, posting 19 points on 18 kills and a block. Milad Ebadipour added 14 points (10 kills, 2 blocks, 2 aces) and Saman Faezi was a force at the net, putting up seven blocks and five kills for his 12 point tally.

It was a two-man show for China, which relied on Jingyin Zhang and Chuan Jiang to lead the way. Zhang notched 16 points on 14 kills and a team-best two blocks, while Jiang added 13 points on 11 kills, a block and an ace. The next highest scorer was Daoshuai Ji with six points (5 kills, 1 ace).

Faezi made his presence known from the start, racking up three of the team’s six blocks in Set 1, which ended in a 25-19 win for Iran.

China struggled with unforced errors in Set 2 and Iran built a sizeable lead, one which its foes could not overcome, despite a valiant comeback attempt.

Setter Mir Saeid “Marouf” Marouflakrani gave the Iranians cushion in Set 3 with a run of seven serves to expand on a 9-8 lead. Marouf left the match to applause with his team up 23-14, but that did not slow the Iran in finishing off the 25-15 win.

Wallace De Souza led all scorers with 22 points (19 kills, 2 aces, 1 block). He had help from double-digit efforts by Mauricio Silva (17), Isac Santos (12) and Douglas Souza (12). Lucas Saatkamp chipped in nine points. Silva downed 12 kills and served up four of the team’s aces. Souza tacked on 10 putaways, while Santos added eight. Santos put up a team-best three blocks, while Saatkamp chimed in with six kills, two aces and a block. Four other players served up an ace in the win.

The teams were back and forth in Set 1 with neither gaining more than a two point edge until a Silva ace gave Brazil a 23-20 advantage. A second straight ace gave the team a set point try, which it cashed in on right away.

Brazil carried the momentum to a 10-6 lead in Set 2 and upped the lead to five at 16-11 soon after. In the end, a service error put the Brazilians up 2-0 in the match.

After a close first half of Set 3, Russia flexed its muscles and grabbed a 15-10 advantage. Brazil tightened the score, but a Muserskiy ace extended the match by giving the home side a 27-25 win.

De Souza and Santos starred as the Brazil block came to life, putting the team ahead 16-10, a margin Russia could not overcome. Souza tooled the block to put Brazil atop the standings chart at 6-1.