Dutch Dodge a Bullet in Ukraine, Will Vie for Worlds Berth Saturday 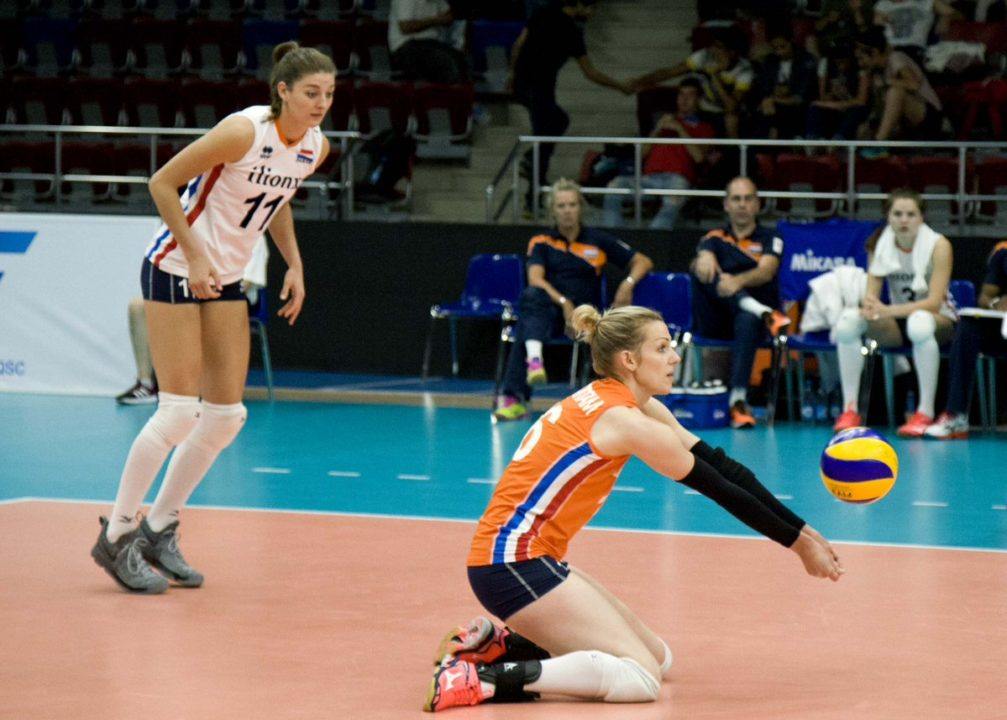 Azerbaijan moved to 4-0 with a sweep of Israel, while the Netherlands edged Ukraine in four sets to set up Saturday's battle for the pool's automatic Worlds berth. Current Photo via CEV Volleyball

All signs have pointed to a showdown between the fifth-ranked Dutch and 12th-ranked Azerbaijan since the opening of European Qualifying. Friday’s Pool E results have confirmed that as the case.

Azerbaijan moved to 4-0 with a sweep of Israel, while the Netherlands edged Ukraine in four sets. In the third match of the day, No. 36 Norway topped No. 29 Denmark in four sets.

“We started terribly and ended up losing the first set,” Norwegian coach Odd Atle Ekerhovd said. “Both teams had ups and downs but we are happy with the result. I hope my girls will continue the same way and win also their last match in this tournament.”

Denmark won the first set, taking advantage of 10 Norwegian miscues and leading by as many as five in the 25-21 win. Norway responded with a wire-to-wire Set 2 victory, which saw Denmark hit just 17 percent, and overcame a 21-17 deficit in Set 3 to steal away the 25-23 win. The Norwegians closed out the match with a 25-15 drubbing including six aces.

“We are disappointed because my team had a good opportunity to win,” Denmark coach Sven-Erik Lauridsen said. “However, Norway was better today and I have to congratulate our opponent.”

Azerbaijan put up at least three blocks in every set and had help from four aces in Sets 1 and 3 en route to the win, which kept them at a perfect 3-0 on the week. The home side hit at a 51 percent clip in the victory.

Polina Rahimova accounted for four of the team’s blocks and added 10 kills and an ace in a match-high 15 point scoring effort. Three other Azerbaijan players posted double-digit point performances. Natalya Mammadova (13), Ayshan Abdulazimova (13) and Kseniya Poznyak (11) made up the group. Abdulazimova served up four aces and added three blocks, while Mammadova tallied a match-best 11 kills.

“We have started preparing for the big, final match against The Netherlands,” Abdulazimova said. “The team has been playing great so far and all players are in good shape. We just need to beat the Oranjes and if we do so, we will be going to the World Championship.”

Anna Velikiy continued to lead the Israeli charge, turning in nine points, with eight kills and a block.

“Azerbaijan have a really strong team,” Israeli coach Giuseppe Cuccarini said. “My team, on the other hand, does not have much experience at this level and we ended up losing. We showed a good performance against The Netherlands but maybe today my players were a little tired. We played a few big games here in Baku and we will now continue our journey in this tournament.”

It took five set-point chances for the Dutch to grab a 30-28 Set 1 win and another extra-point stanza in the finale in which they had to thwart two set point opportunities to stave off a feisty Ukrainian team on Friday. The Netherlands won the match 30-28, 18-25, 25-13, 27-25.

The Dutch were their own worst enemy in the match, committing 27 errors, to keep Ukraine in the match, despite outblocking the foe 16-5 and outserving them 7-1.

Both teams struggled to gain their footing in Set 1, hitting at just a 36 percent effort, although the Dutch managed six blocks in the set, aiding their comeback from an 8-3 deficit. The Ukrainians hit 40 percent in Set 2 and had help from eight Netherlands errors in a start to finish win. The Dutch bounced back with a 52 percent hitting effort in Set 3 and also utilized five blocks and an ace in the victory.

Olesia Rykhliuk left it all out there for Ukraine, registering a match-high 27 points, with 25 kills and two blocks, a day after missing a match with a cold. Nadiia Kodola followed with 14 points, including 13 kills.