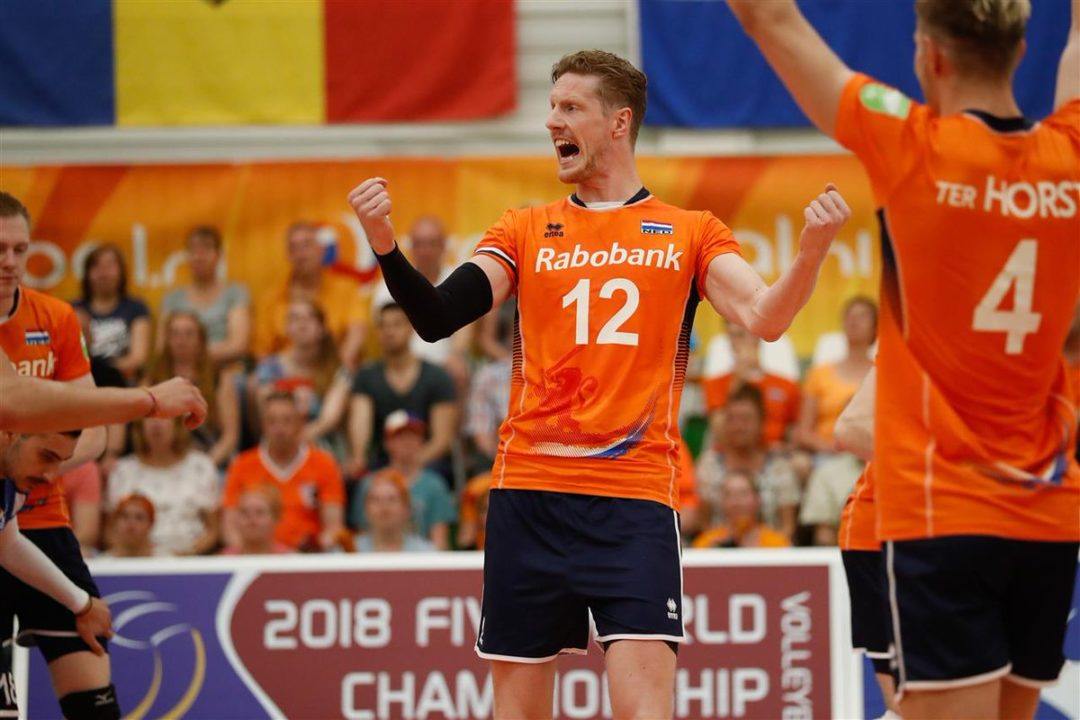 The Netherlands continues to succeed at home in Koog aan de Zaan, registering a 3-0 win over Greece to remain atop Pool B.  Current Photo via CEV Volleyball

The Netherlands continues to succeed at home in Koog aan de Zaan, registering a 3-0 win over Greece to remain atop Pool B. Slovakia and Austria also registered sweeps in Day 3 action.

Austria struggled early in each set, but came through in the end to squeak out a 26-24, 25-23, 25-20 victory over Luxembourg.  Sets 1 and 2 were closed early and even at the midway point with Austria owning a slight edge at 8-7 and 16-14 in both, before closing things out. After jumping ahead 8-6 in Set 3, the Austrians pulled away with a 8-3 run and never looked back.

“We took seven points from three matches and we are very happy with that,” Austrian coach Michael Warm said. “We are still in the race and Saturday we can play freely against The Netherlands, the favourite team in my opinion.”

Luxembourg kept the match close with nine aces and trailed Austria by just three kills (52-49) and two blocks (8-6). The teams both hit better than 50 percent for the match.

It was a bit of a roller coaster ride for Slovakian fans as their side posted a dominating 25-9 Set 1 win and just edged Moldova 33-31 and 25-23 in the next two sets to secure the win and stay alive in the race for a World Championships bid.

“The Republic of Moldova gave all their best today, in contrast to yesterday against the Netherlands,” Slovakian coach Miroslav Palgut said. “Thanks to good serving and blocking we managed to win this game. The match against Greece on Saturday will be very important for us, we have to win it.”

More than 1,000 fans came to Topsportcentrum de Koog to see the Oranjes in action and the home side delivered with a 3-0 sweep, although the Set 2 win required a comeback effort. The Netherlands defeated Greece 25-13, 32-30, 25-16.

The Dutch trailed 21-18 in Set 2, but rallied to staved off eight Greek set point chances to take the 32-30 win as Greece committed 12 errors in the stanza. The Netherlands took its first lead of the set at 31-30.

So it was 3-0 to the Dutch against @HellasVolley, but what we want to know is which celebration shot you enjoy the most #FIVBMensWCH pic.twitter.com/7cVUMY1aBX

The Greeks served up just one ace in the match and allowed six and were plagued by 35 errors on the night, in part due to nine Dutch blocks.

“This was an absolute team victory,” Dutch head coach Gido Vermeulen said. “Thanks to the fighting spirit of Wessel Keemink and Robin Overbeeke we won the second set. Now will we prepare for another final, i.e. the match with Austria coming up on Saturday.”