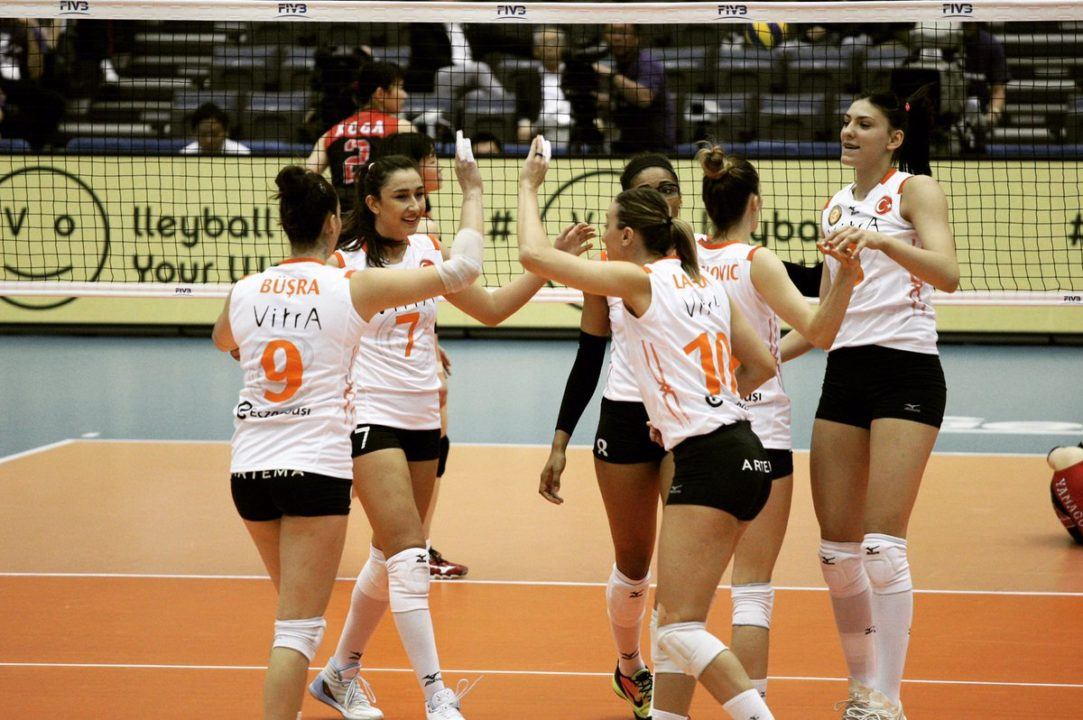 With the wins, Valero takes the top spot in Pool B, while Eczacibasi snagged the second semifinal position.  Current Photo via FIVB

Volero Zurich ran the table on Pool B finishing in the top spot with a 27-25, 25-22, 25-18 win over Brazilian side Volei Nestle Osasco Thursday night. Meanwhile, two-time defending champions Eczacibasi squeaked its way into the semifinals with a 3-0 set win over NEC Red Rockets.

The teams advance to the Women’s Club World Championship semifinals which will be played beginning at 2:40 a.m. ET Saturday. Eczacibasi will face Turkish league foes Vakifbank Istanbul at 2:40 a.m. followed by Volero Zurich (3-0) vs. Rexona at 6:10 a.m.

“It was an interesting and nice game,” Volero coach Zoran Terzic said. “We were a bit stiff in the first set, but played more calm after that set and we confirmed clinching the semifinal spot. I am satisfied as we have won all three matches 3-0. Now we should focus on the semifinal tomorrow.”

Tandara Caixeta scored a match-high 14 points, all on kills, but it was not enough for Osasco. Ana Bjelica chipped in 10 points for the Brazilian side with seven kills, two aces and a block.

“We showed our volleyball in the first set,” Osasco coach Luizomar De Moura said. “It’s a pity we could not win because we led 23-20 in the first set. We had a chance to get back in the succeeding sets but we did not use it well. After that we just lost our confidence in the match. We need to address this in the future. From the statistics, we were able to play our volleyball to some extent. We just lost concentration in the second set and could not get it back.”

Volero led Set 1 early at 8-5 and 16-14, but Osasco rallied to go up 18-17 on a block by Danielle Lins. Trailing 23-20, Volero got help from a reception error and Carcaces kill to knot the score at 23. A hitting error appeared to give the Swiss side the 25-23 win, but it was challenged and overturned to make it 24-all. Another Carcaces kill gave Volero another set point chance at 25-24 and added two more putaways to clinch the 27-25 win. She had nine points in the stanza.

Osasco led 8-4 at the first technical timeout of Set 2, but Volero charged back to go ahead 15-12 on a block by Carcaces. The Swiss expanded the lead to seven at 21-14 with a block and continued on to the 25-22 win.

“We wanted to create difficulty for them through our serve,” NEC coach Akinori Yamada said. “We achieved that and we organized well against their middle attacks. We just ran out of firepower after scoring 20 points. In the third set, they got used to our tactic and passed very well.”

Eczacibasi put down 51 kills in the match, while NEC managed just 60 points in the match. The Red Rockets did oublock the Turkish side 4-3 and forced 22 Eczacibasi errors.

“NEC Red Rockets played good volleyball for two sets,” Eczacibasi coach Massimo Barbolini said. “It is always really hard to play against Japanese teams. I’m proud of my players for reacting in the right way after we lost our first match here. We have to play VakifBank again in the semifinals, but we are ready.”

The teams split the first 22 points of Set 1, but NEC boasted a 16-14 lead at the second technical timeout. Eczacibasi turned the tables with a 6-2 run, including a kill by Ono. Boskovic put down two kills down the final stretch, including one off the block, to give the Turkish team the 25-22 win.

Eczacibasi surged ahead 8-6 in Set 2 and went on to a 15-11 advantage to force an NEC timeout. The Red Rockets battled back, however, knotting the score at 20 with help from a Shimamura block and Mizuki Yanagita ace. Eczacibasi called timeout to regroup and rallied to a 25-22 win. Boskovic chipped in seven points in the stanza.

After a tie at 6-all, Eczacibasi went up 13-9 and cruised to an 18-9 score as NEC could do little to stop them. The Turkish team claimed its spot in the semifinals with the 25-16 win.