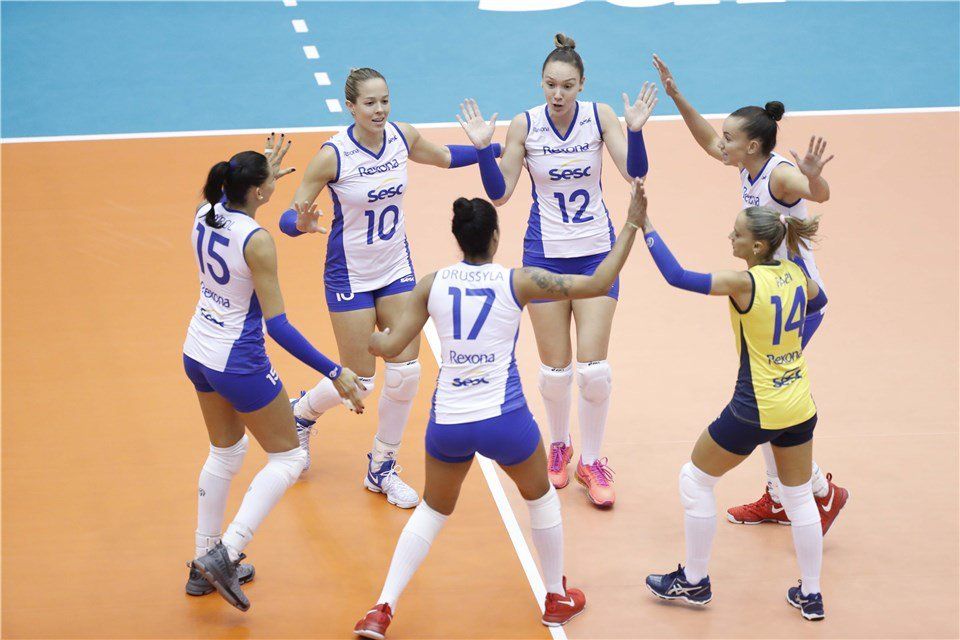 Vakifbank ran the table in Pool A, while Rexona earns its semifinal spot with a 2-1 record. Current Photo via FIVB

The teams advance to the Women’s Club World Championship semifinals which will be played beginning at 2:40 a.m. ET Saturday. Vakifbank will face Turkish league foes and two-time defending champions Eczacibasi Istanbul at 2:40 a.m. followed by Volero Zurich (3-0) vs. Rexona at 6:10 a.m.

““We are happy with the victory,” Rexona coach Bernardno Rezende said. “It was a tough match. They are a tall team and are physically strong. The fans were entertained because there were a lot of rallies on both sides. We have reached our first goal to make the semifinals. Now let’s see what we can do.”

After splitting the first 14 points of the match, Rexona went ahead 16-13. Dynamo rallied to take an 18-17 lead and went on to a 22-21 advantage with help from a block by Monique Pavao. Rexona tied it up at 23 and went on to take the win with a Monique kill.

Drussyla Costa helped Rexona to an early 6-2 lead. The Brazilians maintained the edge at 16-14, but Dynamo surged ahead 19-17. Drussyla and Juciely Barreto tied it up at 22. Dynamo had the first set point chance at 24-22 and secured the win with kill by Bethania De La Cruz.

“We kept our concentration until the end and that is why we won,” Rexona captain Regiane Bidias said.

Dynamo led 19-11 in blocks and 6-5 in aces, but committed 19 errors in the match and allowed Rexona to hit its stride offensively.

“We made too many mistakes,” Dynamo coach Yurii Panchenko said. “Our block did not work well. It is really unfortunate that we lost.”

A strong block and tough service game lifted Vakifbank to a sweep of host Hisamitsu Springs Friday morning, and to the top spot in the semifinals coming out of Pool A. Vakifbank outblocked Hisamitsu 14-5 and served up five aces in the 25-17, 25-21, 25-22 win in which the Turkish side rested several players including star Zhu Ting.

After a close start, Vakifbank scored eight of the next nine points to jump ahead 16-7 in Set 1 en route to a 25-17 win.

Hisamitsu led 4-1 early in Set 3, but Vakifbank rallied with a 7-2 run. Risa Shinnabe injured her leg and left the court in a wheelchair with her team down 16-14. Hisamitsu rallied within one at 20-19 on an Yuki Ishii kill, but Vakifbank closed out the match at 25-22.

Yuki Ishii was the top point scorer in the match, posting 18 for Hisamitsu, including 15 kills and two blocks. Rika Nomoto also added double-digit points with 12 kills, a block and an ace.