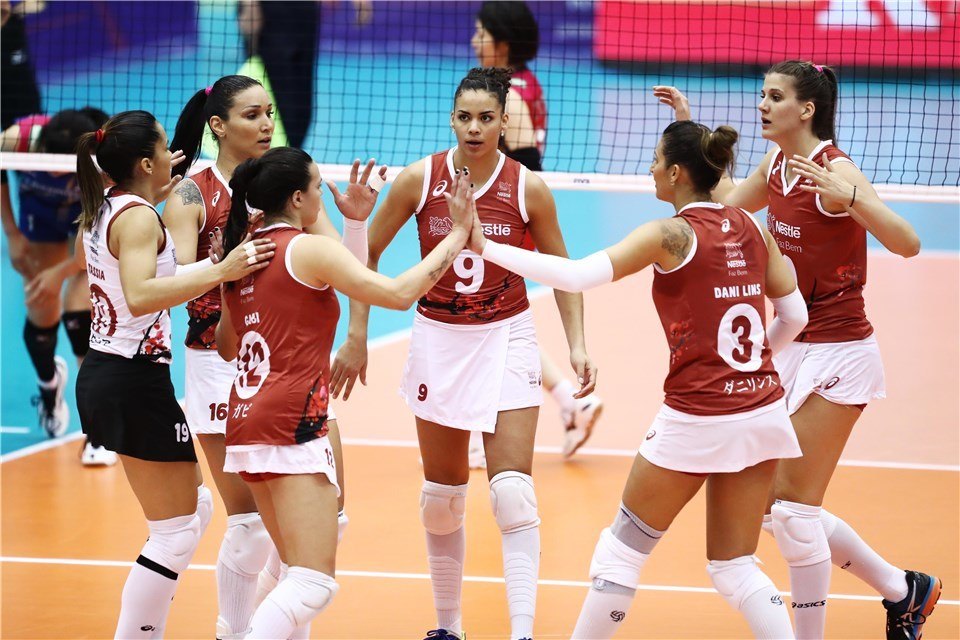 Dynamo are the 2016 and 2017 Russian Super League champions and finished fourth at the CEV European Championships. Osasco, which was runner-up in the Brazilian Super League, had finished third or better in its previous five appearances at Club Worlds.

“We are pleased with the win today,” Dynamo captain Vera Vetrova said. “Many of our reserve players got the chance to play. We did not reach our goal to make the semifinals, but we are happy about the victory.”

NEC scored three of the first five points, but soon jumped ahead 12-5 in Set 1 with quick and dominant attacks. The Russian side built a 10-point edge at 21-11 before finishing off the 25-15 win.

NEC evened the match with a 25-22 Set 2 victory, marking its first set win of the tournament. Dynamo led 8-5 early on, but NEC turned the tables to take a 16-15 lead at the second technical timeout. Yanagita had a few key points in the rally. The teams tied at 19 after Dynamo won a challenge. Oyama put NEC ahead 23-21 with a kill and ended the stanza with a block. Koga tallied six points to lead the Red Rockets in the set.

“We got confidence as a team from this match,” Sarina Koga said. “Yesterday, after reaching the 20th point, we allowed our opponents to score. It was different today. We were able to win one set, which is positive.”

Dynamo returned to form after the intermission, cruising to an 8-4 lead in Set 3. De La Cruz downed a pair of kills and Shcherban added another to push the lead to 18-11. De La Cruz added a kill and an ace down the stretch as Dynamo sailed to the 25-15 win.

“It is unfortunate that we did not meet our target of making it to the semifinals, but today was a chance to allow everybody to play,” Dynamo coach Yurii Panchenko said. “NEC played with confidence and intelligence. They always have a good technique and they are mentally strong.”

A dominant offensive game lifted Osasco to the sweep of the host team. Osasco turned in 49 kills to just 37 for the Japanese league champions. The teams each posted eight blocks, while Osasco outserved Hisamitsu 3-1.

Rika Nomoto managed 12 points for Hisamitsu, 11 kills and one block. Yuki Ishii added 10 kills. Maja Tokarska added five kills and a team-best four blocks. The Japanese side was without the services of Risa Shinnabe, who injured her groin in Thursday’s final pool play match.

“I moved Ishii to Shinnabe’s position and brought in Imamura, which gave us good formation,” Hisamitsu coach Shingo Sakai said. “We still fell short though on getting sideout points.”

“We were hoping to win after rallies against them but they were powerful,” captain Chizuru Koto said. “They overwhelmed us and we could not pass the ball like we wanted to.”

Hisamitsu led 8-5 in Set 1, but Osasco turned the tables with six straight points. A strong blocking effort helped the Brazilians to an 18-13 edge en route to the 25-20 win. Caixeta managed seven points in the opening stanza.

Osasco carried the momentum into Set 2, racing ahead 16-10 and never looking back in the 25-21 win. A Bjelica kill capped the set. Bjelica and Caixeta each managed six points in the stanza.

The teams were tied at 6-all early in Set 3, but Osasco surged ahead by six at 16-10 at the second technical timeout, before rolling to the 25-21 win.

“We are still sad about yesterday’s match,” Osasco coach Luizomar De Moura said. “We promised ourselves that we would give 100 per cent in today’s game. Each of the previous four times our club has appeared in this tournament, we earned a medal. That dream is gone now.”