Eleven Stuffs Lift Arizona to Sweep of No. 12 USC 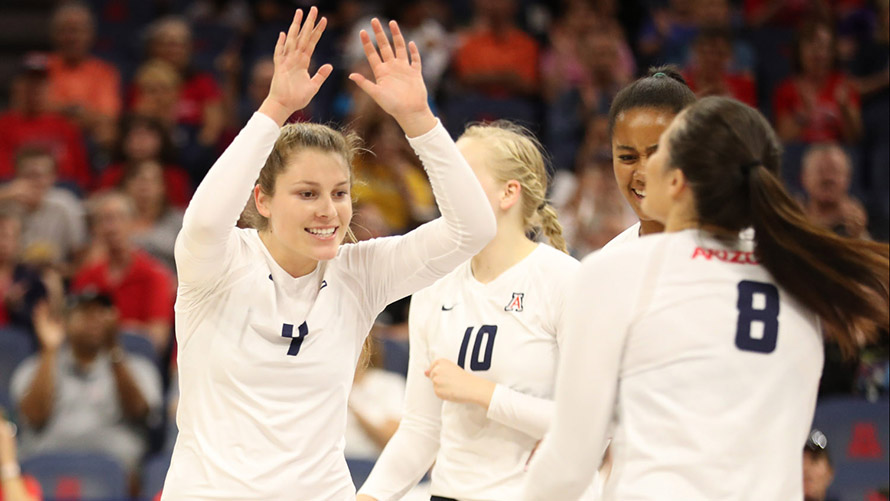 TUCSON, Ariz. – Arizona used 11 blocks to stifle the USC offense in a sweep of the No. 12 Trojans on Friday. The win snapped a four-match losing streak for the Wildcats, and ended a five-match win streak for USC.

Arizona hit at a .391 clip in Set 2, while holding USC to an .029 clip in the biggest win of the night. The Trojans took the early lead, however, taking a 9-6 lead on a Jenna Adams ace. Three Abercrombie kills and two by Krage helped USC to the advantage. The Wildcats turned the tables with an 8-0 run, including three kills and a block by Whipple, to go ahead 14-9. A pair of Alyse Ford kills helped pull the Trojans within three at 15-12, but Arizona gained some cushion with six straight points. Two kills and a block by Denny lifted the Wildcats to the 21-12 lead. A pair of Dahlke kills put Arizona on the hill at 24-16 and a Whipple kill ended it two serves later.

The Wildcats built a 10-4 lead in Set 3, turning in three blocks. USC pulled even at 12-all behind three Krage putaways and a kill and a block by Lanier. A stuff by Lanier and Geiger gave the Trojans a 14-13 lead. USC maintained the advantage, eventually pushing out to a three-point margin at 20-17 with a pair of Withers kills. Down 23-20, Arizona had help from a pair of Trojan miscues to cut it to one at 23-22. An Abercrombie putaway put USC on the hill at 24-22, but the Wildcats stole away the set and closed out the sweep with a 4-0 run. Kills by Cross and Dahlke and a USC ball handling error set up the final kill by Denny.

“It’s certainly nice to win, you’re never sure in this conference about what’s going to happen,” said Arizona head coach Dave Rubio. “It’s hard to know when you’re going to win, and like I’ve said in the past it’s really about the process for us. It’s nice to be able to reinforce what we’ve been doing every day in practice by winning.”

Arizona had 11 blocks in the three sets, holding USC’s offense, which was among the nation’s best entering Friday, to 35 kills on .140 hitting. Meanwhile, the Wildcats hit .262, led by 11 kills on .320 hitting from senior Kendra Dahlke. Freshman Paige Whipple added 10 kills.

“After the loss to UCLA, I think our mentality was focusing on what we needed to take care of,” said Dahlke, who has double-digit kills in five of Arizona’s last six matches after doing that just thrice in Arizona’s first nine matches of 2017. “We’re trying to not worry about what the other team is doing and just focusing on ourselves and executing. ”

In her first career start, Candice Denny was terrific for Arizona. The freshman needed just 11 swings to pick up a career-high eight kills (.636 hitting) including the match-clinching point in the third set. Denny also finished with three blocks in the match.

Sophomore Julia Patterson ran UA’s offense to perfection, dishing out 34 assists and digging 13 balls for her seventh double-double of the season.

The victory kept alive a streak of, now, seven consecutive seasons in which Arizona has upset either USC or UCLA while they have been ranked. The Cats have now won three consecutive matches vs. the Trojans.

“It’s been a long couple of weeks for us, the last time we had a day off was a week ago Tuesday. We’ve been at it now for 9 straight days, and I’m pleased by the way that we’ve gone about our business. I just know that eventually we’re going to start to play better and more consistently. The problem is that in our conference even though you’re playing better it doesn’t always equal the winning. Even against UCLA I thought there were moments that we played really well, but they were just too good that night. It’s tough to be such a young team in such an unforgiving conference.”

Arizona used an 8-0 run to turn a three-point deficit into a five-point lead early in the second set. Arizona never looked back, winning the set 25-17.

In the third, Arizona led big early, but the Trojans quickly erased a 9-3 Wildcat lead and began to turn the momentum in the match. Up 22-19, USC needed just three points to force a fourth set. Arizona ended the match on a 7-2 run, including fighting off a pair of USC set points in the third, to win the match with a 26-24 victory in the third.

Up Next: Arizona remains at home next weekend, hosting Utah (Friday) and Colorado (Sunday) in McKale Center.

Sophomore outside hitter Khalia Lanier had nine kills and three service aces for the Trojans, who hit .140 (35k, 20e, 107att) in the match. Junior libero Victoria Garrick led the defense with 15 digs. Sophomore defender Jenna Adams came up with seven digs and a pair of service aces. Opposite Daley Krage added eight kills and a pair of blocks.

Kendra Dahlke had 11 kills to lead the Wildcats. Paige Whipple added 10 kills while Devyn Cross had four kills and six blocks in the winning effort. Julia Patterson had 34 assists and 13 digs for a double-double.