On Friday morning in Tokyo (Thursday night here on the west coast of the United States), the Japanese Volleyball Association... Current Photo via FIVB

On Friday morning in Tokyo (Thursday night here on the west coast of the United States), the Japanese Volleyball Association (JVA) who will be hosting the 2018 FIVB Volleyball Women’s World Championship announced the ticket prices for each of the venues and rounds of the tournament.

In the 1st Round of the World Championships, Yokohama (Pool A), Sapporo (Pool B), Kobe (Pool C) and Hamamatsu (Pool D) will host five days of matches over six days. Below are the ticket prices for the 1st Round matches.

Yokohama which have Japan in Pool A, have the most expensive tickets at 10,000 yen ($90.42). However, there are plenty of tickets in the General Admission available from looking at the seating map. Sapporo and Hamamatsu have different prices for weekday and weekend matches. While Kobe has a slight discount if you purchase your tickets in advance instead at the venue. Tickets for the first round will be available to the general public on Saturday August 4th.

Moving onto the 2nd Round, Nagoya will host Pool E, while Pool F will be held in Osaka. If the Japanese women make the second round, they will be playing in Nagoya. Nagoya is matching Yokohama with the highest ticket price at 10,000 yen. The remaining price breakdown is below. 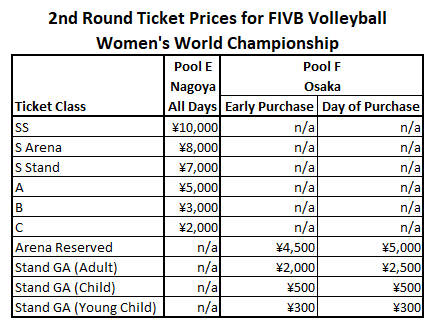 Osaka has the potential of hosting China, Italy, Turkey, USA and Russia in the 2nd Round and if you can get in early 4,500 yen ($40.69) for the best seats in the building is a pretty good value. Tickets for the second round will be available to the general public on Saturday August 4th.

Lastly we will look at the 3rd Round in Nagoya and the Final Round (including semifinals and final) in Yokohama. 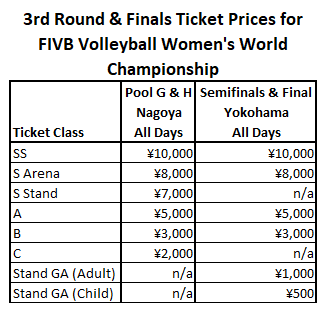 The prices for both the Nagoya (3rd Round only) and Final matches in Yokohama are the same prices as they were in previous rounds. Again, tickets will be available to the general public on Saturday August 4th.

With the tournament less than three months away, if you are planning on attending, make your travel arrangements early. Traveling to Japan is not cheap and staying at a hotel also may not be cheap either. Also for those traveling from overseas, the FIVB with help from Rakuten has made tickets available in English for purchase with previous events in Japan, like the 2015 World Cup and 2018 VNL matches. Your seat options may be limited, but at least they would be available.