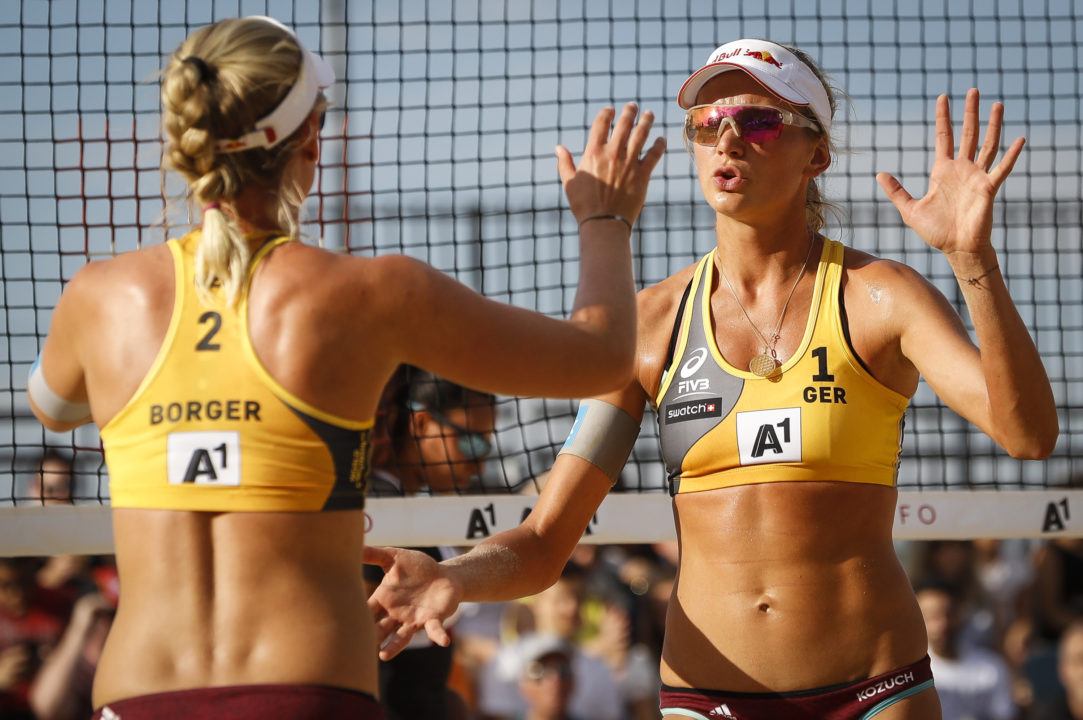 Less than a year ago, German indoor star Maggie Kozuch traded hardwood for sand, partnering with Karla Borger to kick off a career on the beach in hopes of gaining a Tokyo 2020 Olympic berth.

At first, the former opposite hitter had a bit of a struggle—the game on the beach is a lot different than it is indoors, even for two time European Championship silver medalists. Kozuch and her Olympian partner did not fare well at their first tournament together in Fort Lauderdale, winning only one of four matches. Since then, however, her improvement and attitude have been exceedingly positive.

The German duo have since finished ninth, fifth, and ninth in their succeeding tournaments, and opened the 2017 Beach Volleyball World Championship with a 2-0 (21-16, 21-17) victory over fellow German pair Julia Grossner and Nadja Glenzke. The following day they squashed the Moroccan team of Mahassine Siad and Imane Zeroul in a commanding 2-0 (21-10, 21-11) triumph.

“I’m just here. I think it’s easier to see from outside the court,” Kozuch said, smiling all the while. Her sunny attitude has been infectious on and off the court. “There are still things that are new for me and some things work out and some not. For sure you can see the difference from February to today but for me it’s difficult to compare. I feel a little bit more secure in some elements and some things because I have more experience. On the other hand, there are some I don’t feel confidence and that’s normal.” She’s certainly still on the learning curve, but her transition is going well.

Kozuch isn’t the only one noticing her improvement, either. “It’s unbelievable if you see her some months ago, she’s really progressed from week to week. It’s cool to see,” said her partner. “I went to see some videos from the beginning of the season and now. She’s still not a beach volleyball player but she’s really close. For what she’s doing on the court is amazing for an indoor player.”

Tomorrow the duo will finish play in Pool D with a match against home country rivals Laura Ludwig and Kira Walkenhorst in a 2 p.m. center court match. Ludwig and Walkenhorst are also undefeated.