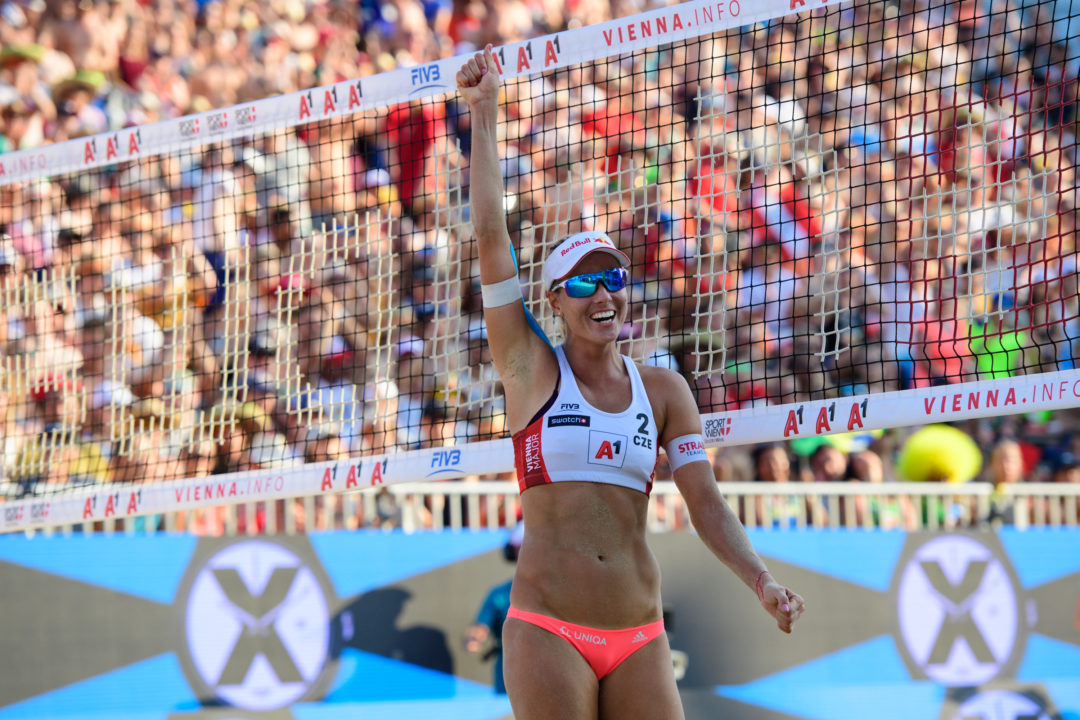 Seventh-seeded Barbora Hermannova/Marketa Slukova of the Czech Republic overcame a 21-10 Set 1 loss in the title match and a nagging shoulder injury to Slukova to win their first ever Major Series gold. Current Photo via FIVB

Seventh-seeded Barbora Hermannova/Marketa Slukova of the Czech Republic overcame a 21-10 Set 1 loss in the title match and a nagging shoulder injury to Slukova to win their first ever Major Series gold and first FIVB gold medal since the Ostrava Four Star on June 24.

“It’s definitely the biggest victory of our careers,” Slukova said. “It’s so amazing to play in front of such a country and bring the gold medal home, especially after how the game started. We started so badly. We couldn’t find each other in setting and really didn’t have counter attacks. We thought we were really embarrassing ourselves and this definitely wasn’t the way we wanted to end the tournament. We had our problems but we really stuck together and that’s what I’m most proud of.”

The Czech pair went 6-1 in the tournament, winning five straight after falling the Pool G title match to No. 10 Carol Solberg Salgado/Maria Antonelli. Hermannova/Slukova got sweet revenge in the semifinals, sweeping the Brazilians 22-20, 21-19, to reach the championship match.

In the gold medal match, Hermannova/Slukova bested another Brazilian side, this time topping No. 4 Barbara Seixas de Freitas/Fernanda Alves  10-21, 21-16, 15-12.

The Brazilians scored seven points on Czech errors in Set 1, while each player turned in five kills and Barbara added two aces. Slukova caught fire in Set 2, racking up 11 kills and two blocks and guiding the duo to a 21-16 victory. Slukova continued to have the hot hand in tiebreak, downing eight putaways, while Hermannova added two kills, a block and an ace in the 15-12 win to clinch the gold.

Barbara/Fernanda served up four aces, while Hermannova/Slukova countered with five blocks. The Brazilians earned their second Major title appearance of the year, following a gold medal at the Fort Lauderdale Five Star on March 4.

No. 16 Madelein Meppelink/Sanne Keizer swept No. 10 Carol/Maria Antonelli for the bronze. The Dutch pair rebounded from a 21-17, 23-21 semifinal loss to outdo their Brazilian foes 3-0 in aces and 31-24 in kills, while taking advantage of nine faults.

Meppelink racked up 22 of the Dutch duo’s 31 kills, 11 in each set, while also adding three stuffs. Carol notched 16 putaways and four blocks to lead the Brazilian side.

Meppelink/Keizer, who won the CEV European Championship on July 21 and the $20,000 paycheck that came with it, posted their second FIVB podium finish of the year, following a runnerup finish at the Mersin Three Star.