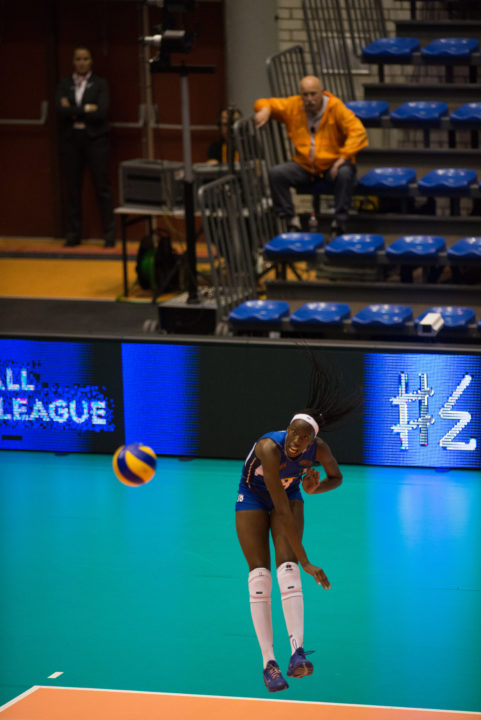 With a spot in the Final 6 on the line, the Italian women have made 2 key changes to their... Archive Photo via FIVB

With a spot in the Final 6 on the line, the Italian women have made 2 key changes to their roster for the 5th and final week of play at the 2018 FIVB Women’s Volleyball Nations League.

Playing in front of a home crowd in Eboli, Italy, against Belgium, Brazil, and Thailand, the team will be without Anastasia Guerra or Miriam Sylla, instead replacing them with a 3rd opposite Serena Ortolani and outside hitter Alice Degradi.

Sylla was the team’s primary offensive weapon in the first 2 weeks of the tournament before Paola Egonu returned to the squad’s lineup, and ranks 2nd on the team with 103 points through 12 matches. Guerra has scored 48 points.

Ortolani played early in the tournament, before being dropped for Egonu, but Italy will now carry 3 (listed) opposites into week 5. This is Degradi’s first action in this season’s Nations League.

Italy dug themselves into a hole in weeks 1 of the tournament without many of their stars, especially Egonu. They went winless and picked up only 1 point in the first week of play in their opening performance in the U.S. They recovered for 2 wins in week 2, and with basically a full lineup back earned 2 wins in week 3 and 3 in week 4.

Their recent success still leaves them in 6th position, with the top 5 assured of a spot in the Final 6, plus China, who receives an automatic bid wherever they finish.

That means Italy is 2 games in the win column behind the triad of Serbia, Turkey, and the Netherlands. Italy has two winnable games to begin week 5, but then they’ll face current #2 Brazil in the clincher, which could be the game they need to win to advance. Brazil, however, might not have anything significant left to play for in that match, and so might rest their starters.

Among the teams with whom Italy will be in a virtual competition, Serbia has left most of their starters home to rest (but would still clinch with 1 win over, say, Argentina); Turkey faces the Netherlands, Germany, and China; and the Netherlands face Turkey, China, and Germany. That means the target will be needing Germany, who have payed very well for stretches in this tournament, to beat Turkey and/or the Netherlands, and having one of those two teams go winless.

“I am excited because tomorrow I will be on the pitch for the first time in Italy with the captain’s armband of the national team,” said middle blocker Cristina Chirichella. She continued, with a laugh, “Moreover I will do it in my part of the country, in front of almost all of my relatives. We know how to play an important qualification, the team climate is very good, we are all anxious, we can not wait to take the field.”

“It will not depend only on us, we will focus on getting 3 wins, and the rest will then be seen. We still have a little bit to improve from the technical point of view, but we are a young and talented group that has a great desire to learn, grow and show what it’s worth. We will do our best to show a high level volleyball and I hope that these games will give a wonderful show to our audience.”