Italy, Belgium Will Face Off for CEV U17 Title in Pool 2 Rematch 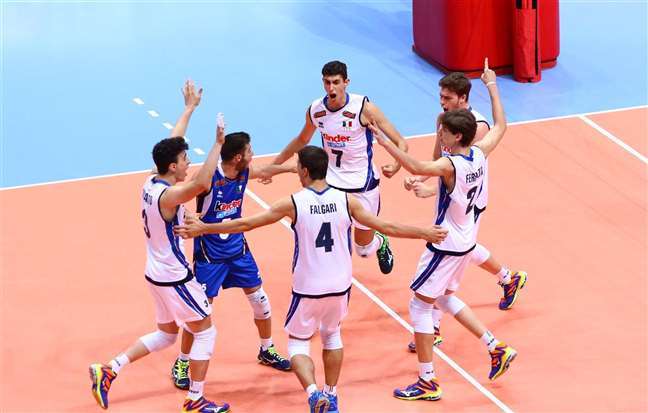 Belgium and Italy will meet with the U17 European Championship on the line on Tuesday after each won via sweep in Monday’s semifinals. Current Photo via CEV Volleyball

Belgium and Italy will meet with the U17 European Championship on the line on Tuesday after each won via sweep in Monday’s semifinals.

For Belgium, the win was a nice way to bounce back after dropping its final pool play match. Italy saddened the Turkish home crowd of more than 2,100, stealing away a Set 2 victory in a sweep riddled with miscues.

Belgium trailed 3-1 early in Set 1, but turned it into a six point lead en route to a 25-22 win. Set 2 was a back and forth affair, with Bulgaria boasting a 16-14 advantage midway through, only to see Belgium rally for the 25-21 victory. Belgium led by as many as seven in the final set of the sweep.

“I’m very satisfied but our scout did well and Bulgaria could not play their attacking game,” Belgian coach Wim De Boeck said. “The team did what I asked and now we have a great chance. The gameplan was perfect and the players executed it. There are moments these players open up as you can see when they celebrate but there are moments when they focus and that’s important.”

Belgium registered a 43 percent kills percentage, while holding Bulgaria to a 34 percent effort. The Belgians also won the block (9-6) and from the service line (3-2).

Turkey managed 44 kills, including a 43 percent efficiency, but could not overcome 27 errors and a strong Italian serve in the match. Italy posted just 31 kills, but committed just 10 errors, while outdoing its foes 7-5 on the block and 10-3 in aces.

Italy blazed through Set 1, came back from a late three-point deficit in Set 2 and lead from start to finish in the final stanza of the sweep.

“Before the tournament there was no way I thought we could win as we had so little time to prepare,” Italian coach Bruno Morganti said. “My team had a lot of ability but we were handicapped slightly because we didn’t have the time to prepare. It was ready, set, go but I knew we had the potential to progress as the tournament went on and I’m delighted we’re in the final. Belgium has an excellent setter and they move the ball very quickly. It will be important for us to serve well and try and keep the setter as far away from the net as possible. We will try to stop them moving the ball quickly. Our celebrations are done for tonight but we’re already thinking about tomorrow’s final. The lads are calm. The final is essential and they know that the match is going to be decisive.”