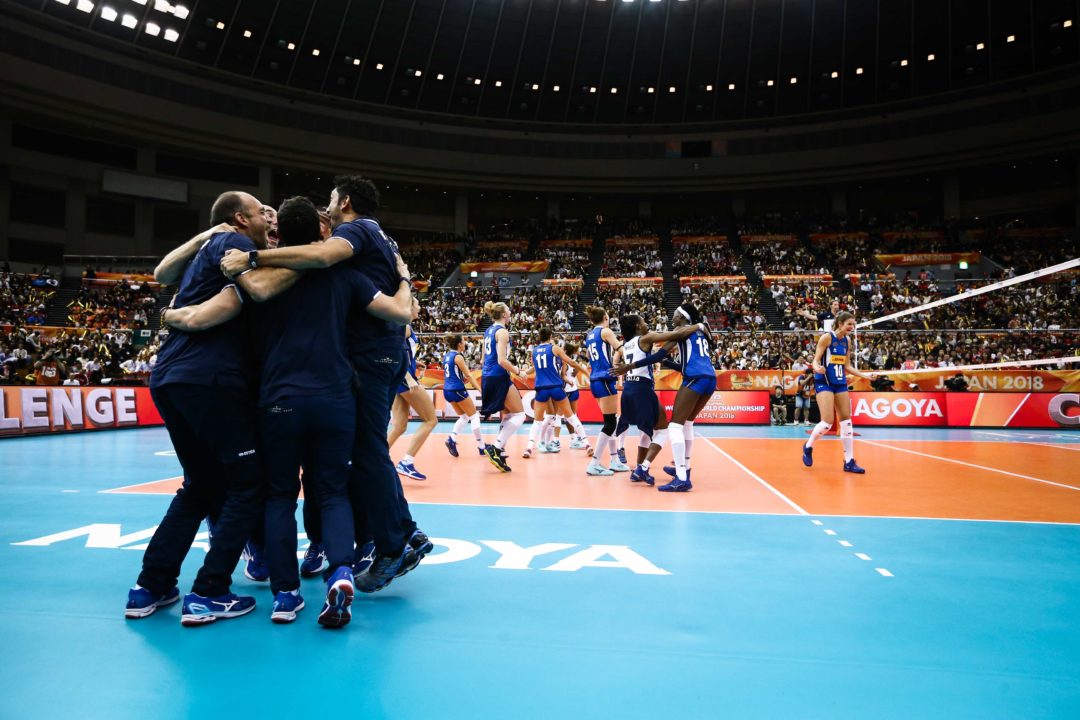 Italy stayed perfect on the World Championships with its 10th straight victory to eliminate Japan from contention on Monday as 19-year old Paola Egonu turned in a match-high 36 points. Current Photo via FIVB

Italy stayed perfect on the World Championships with its 10th straight victory to eliminate Japan from contention on Monday.

The Italians boasted a 2-1 lead in the match and held on for the 15-13 tiebreak win behind 36 points by Paola Egonu.

“Japan played incredible on attack and defense,” Italian coach Davide Mazzanti said. “We had trouble on sideout in the first and second sets. We gave away too much. We were not able to maintain our gameplan. I’m proud of the team. Our next match will be important. I’m tired but happy. We expected it to be a difficult match. Our players made it more difficult after not grasping chances.”

With a sold-out crowd looking on, Italy crushed the hopes of the home team, issuing Japan a five-set loss.

Italy piled up 13 blocks (to 4) and outdid Japan 74-65 in kills to overcome 29 miscues in the match. The Japanese were better from the service line, outdoing the Italians 6-2 in aces.

Four Japanese played scored in double digits with Erika Arika leading the way with 17 (14 kills, 2 blocks, 1 ace). Sarina Koga (16), Risa Shinnabe (15) and Yuki Ishii (15) were right behind. Koga turned in a team-leading 15 kills, while Shinnabe added 13 and two aces. Ishii served up a team-best three aces to go with 12 putaways.

In the tiebreak, Japan boasted an 8-6 lead at the changeover. Italy scored three in a row to tie it up at 9, then grabbed the lead on a block by Danesi. After another tie at 11, a stuff gave the Italians a 13-11 edge en route to the 15-13 win.

Japan jumped ahead 7-3 in Set 3 and pushed ahead by five at 16-11 behind offensive efforts by Koga and Shinnabe. Egonu sprung into action pulling Italy within one at 16-15, but three Italian miscues and kills by Koga and Okumura claimed the win for the Japanese at 25-22.

Japan went up 6-4 in Set 4 and boasted a six-point edge at 16-10. Italian miscues and strong Japanese serving put the home side up 24-18 before Shinnabe sent the match to tie break.

This season we were trying to develop the team with the goal of getting a medal in this event,” Japanese coach Kumi Nakada said. “I am full of disappointment. We still have one match to play. The differences between us and the world’s best are many. The score difference was only one or two points, but that is still a big difference.”