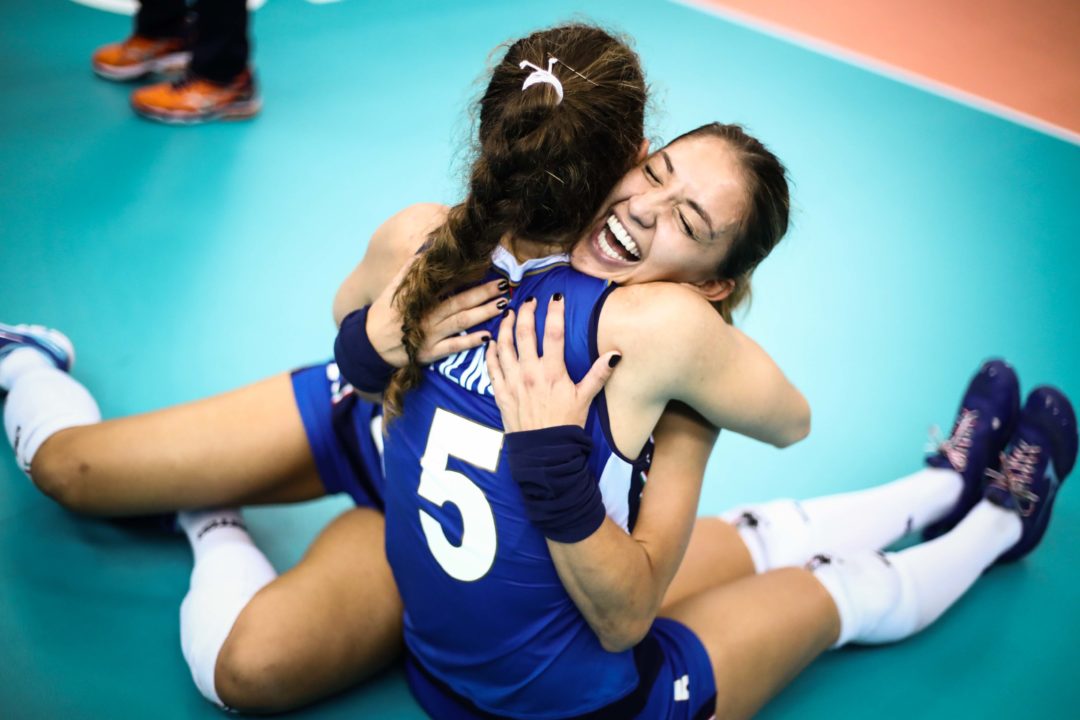 The Italian women remained undefeated on Monday to join the Dutch, Serbians, and Chinese in the semifinals at the 2018 Women's Volleyball World Championships. Archive Photo via FIVB

The 4 teams that will advance to the semi-finals of the 2018 FIVB Women’s Volleyball World Championships are set. At the conclusion of Monday’s matches, hosts Japan had 2 losses in Pool G, which means that Serbia and Italy are assured of advancement; while in Pool H, the United States lost their 2nd match, at the hands of the Dutch, and so the Netherlands and China will advance.

The way that the schedule worked out, the team playing the day 1 and day 2 back-to-backs in both pools (Japan and the United States) were eliminated. That means that Tuesday’s matches won’t be for advancement, but rather they will be for seeding purposes only.

The Italy-Serbia match will be the early game on Tuesday. In this scenario, without some insider info about how the Dutch and the Chinese will approach their match, the win is effectively moot. It’s a bit of a circular reference, but basically, the Chinese and the Dutch will know exactly where they stand heading into their match later in the day, but with how well both teams have played, there’s not an obvious upside to ‘throwing’ that match and being able to play the Italians or the Serbians. Either will be a brutal semi-final (and, in this writer’s opinion, Italy and Serbia are the favorites to advance and play again in the final).

So if the Dutch and the Chinese have no incentive to go full-bore, tire their players, and risk injuries to their stars, then neither do the Italians or Serbians. Expect to see a lot of reserves in the matches, and no team intentionally trying to lose, but also none of the 4 teams putting much effort into winning, either.

Historical Notes About All 4 Teams