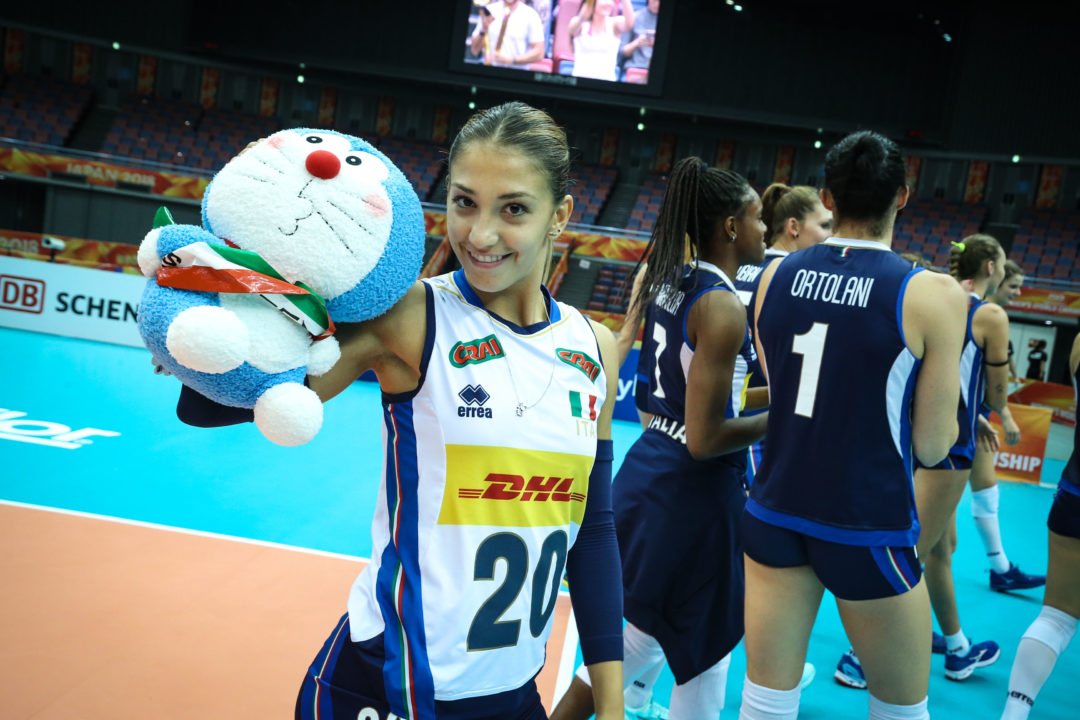 Italy and their libero Beatrice Parrocchiale (above) have owned the 2018 FIVB Women's Volleyball World Championships so far. Archive Photo via FIVB

A lack of motivation? An injury to a star player? There’s lots of explanations for Serbia’s 2-match losing streak to close round 2 of the 2018 FIVB Women’s Volleyball World Championships, but the fact-of-the-matter is that the sudden streak of defeats, after not losing a set in their first 7 matches, relegated Serbia to a draw to determine their precise location in the Final 6. That location wound up being in Pool G, where they’ll be forced to play an Italian team that kept its form to the end of round 2 and are 9-0 so far in the tournament.

And as such, a match that rightfully should have been saved for the gold medal game will now take place in the 3rd round of competition instead.

We can’t count Japan totally out, given that they beat Serbia late in the 2nd round of play, but the  host nation is the clear underdog in a group with the tournament’s 2 best* teams.

*’best’ based on how they were playing before clinching.

Japan has the defense to stop a Serbian team without Tijana Boskovic, as they did in the win, but with both Boskovic and Mihajlovic healthy for Serbia, and Italy bringing the teenage opposite Paola Egonu and her cast, the inconsistency of the Japanese offense, especially against top opponents, isn’t going to be enough. Japan is hitting just 41.98% in the tournament so far. That’s the second-lowest of any team in the Final 6.

With the exception of Germany, the Japanese have been even worse against top-tier opponents. Against Serbia, even while getting a 3-1 win, Japan hit just 35.0%.

So the picks are that both Serbia and Italy advance, with Japan going 0-2. With Italy and Serbia finishing the group, and playing before Pool H finishes, we’ll likely see backups for both teams if they’ve both beaten Italy to clinch their spots in the semi-finals (like we saw in the men’s tournament). So, take that match with a grain-of-salt.

*Match comes after both teams clinch spots in Final 6.