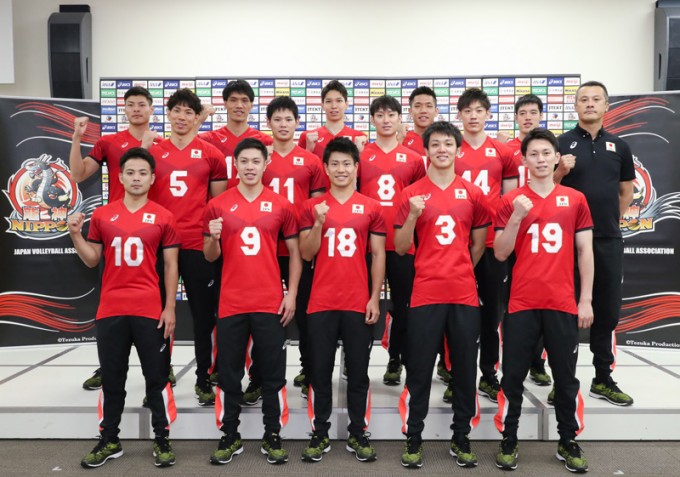 On August 28th, the Japanese Volleyball Association (JVA) held a press conference at the Ajinomoto National Training Center in Tokyo to announce the final roster for the Japanese men’s national volleyball team for the 2018 FIVB Volleyball Men’s World Championship to be held in Italy and Bulgaria in September. Head coach Yuichi Nakagaichi made the announcement of the roster at the press conference.

The Japanese men’s national team is called the the Ryujin Nippon or Dragon Kings Japan and their 14 player roster is made up of the following players by position:

This Japanese men’s team is young, with only two players Fukuzawa and Koga born in the 1980s (1986 and 1989 respectively). Nishida is the youngest player on the roster at 18 years of age, and we have already seen how he performed with the national team during the Volleyball Nations League in May and June. I would say that the majority of the younger players on this team, Yanagida, Ishikawa, Yamauchi, Sekita, Fujii, Ide, Otake, Nishida and Takahashi will use this as experience for the 2020 Tokyo Olympics.

I would expect that the Japanese starting lineup against the Italian men’s team on September 9th will be the following. Sekita at setter, Yanagida, Ishikawa and Fukuzawa at the outside hitters, Yamauchi and Lee as the middle blockers, Otake as the opposite and Koga as the libero. With the four remaining matches in group play, I think that Nishida will get more playing time than Otake, but for the first match, Otake will use his experience from playing in Germany last season. Takahashi will come in if the blocking is not working for Japan.

The main goal of this team in the World Championships is to make it to the second round as they will probably need two wins against either Argentina, Belgium, Slovenia and the Dominican Republic to advance. Japan did defeat the Italian men’s team in the Volleyball Nations League, but with Zaytsev and Juantorena not playing in that match, I feel that it will be a different result in Rome next weekend.