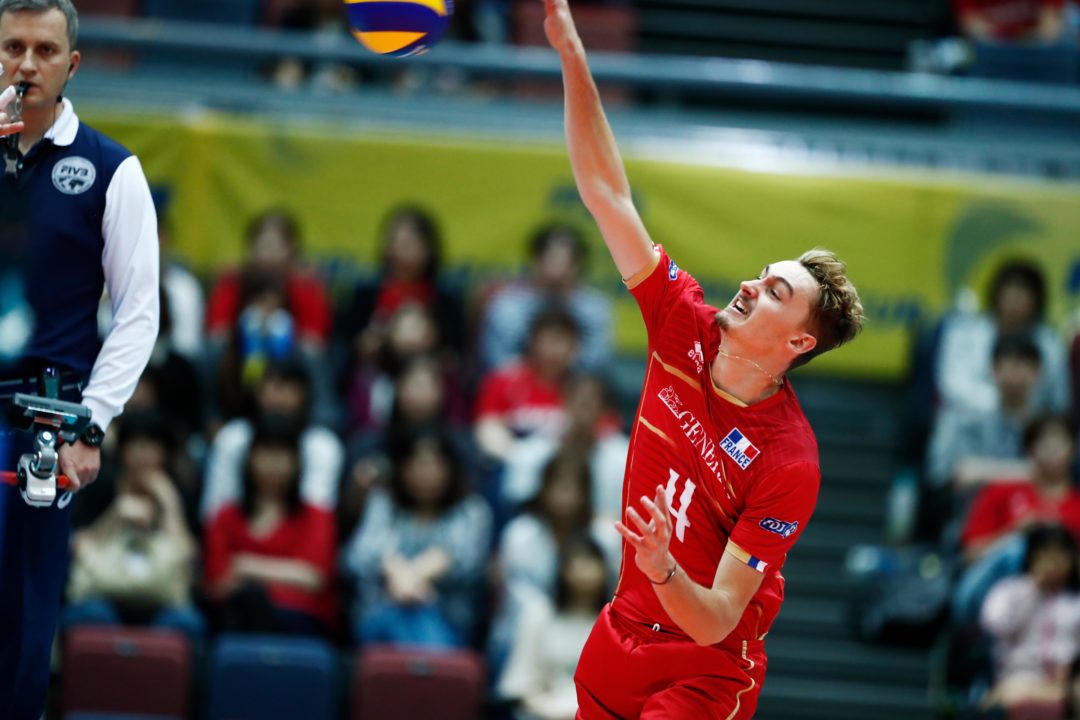 In the 21-year old Patry and the 22-year old Stephen Boyer, France has two young, world-class options at opposite. Archive Photo via FIVB

The 6’9″ opposite, who spikes at 132 inches (335cm) and blocks at 124 inches (316cm), was on France’s roster at the 2017 European Championships, but scored only 14 points total in 5 sets played across the tournament. He also only scored 2 point in limited action in last year’s World League. He got a little more action at last year’s Grand Champions Cup, where he scored 52 points (43 kills, 8 blocks, 1 ace) on 48.65% hitting. He and Boyer each started 2 of France’s 4 matches in that tournament.

Patry plays with Montpellier Volley UC in France’s top league, and while rumors had interest in him from all over Europe, he has renewed his contract for another season in Montpellier. His domestic break-through came last season in the French league, where he led all players with 420 points and was the 4th-highest rated opposite in the league.

In Friday’s opener against Iran, Patry received the start over France’s other young star at the position, 22-year old Stephen Boyer, who in last year’s World League (when he was the same age as Paltry is now) led all players in scoring with 165 points. Boyer was the top-rated opposite in the French Pro A league last season.

Boyer came into Friday’s match against Iran late in the 4th set, a set where Paltry faltered a little, scoring only 2 points on 2/5 hitting. As if to remind of his presence, in his only swing, Boyer had a single emphatic kill on his only offensive action of the day.

With the likes of last year’s World League MVP Earvin Ngapeth at outside, France now has a glut of offensive weapons at the attacker positions (Ngapeth scored 13 on 28 swings). They have youth as well – Thibault Rossard, the other starting outside on Friday, is just 24-years old, while Ngapeth is 27.

While a few matches is a small sample size, especially for a player who wasn’t on France’s team at the 2016 European Junior Championships and generally has very limited international experience, the French might weigh a move of Boyer to outside hitter (at 6’5″ tall, he’s the more logical shift than the 6’9″ Paltry) to allow Patry to develop into the opposites role and allow both into the starting lineup. At almost the same age, it appears that both are on a trajectory too high to leave one on the bench for the long term. A front line of Ngapeth, Boyer, and the Patry that performed on Friday would give France a claim to the best offensive lineup in the world heading toward the Tokyo 2020 Olympic games.

With the hot-tempered Ngapeth sitting on one side, the primary goal will be to keep him happy and engaged in the offense. Then it will be up to French coach Laurent Tillie to manage the rest of shots between the rest of  his lineup, including the two young powerhouse opposites Boyer and Paltry.