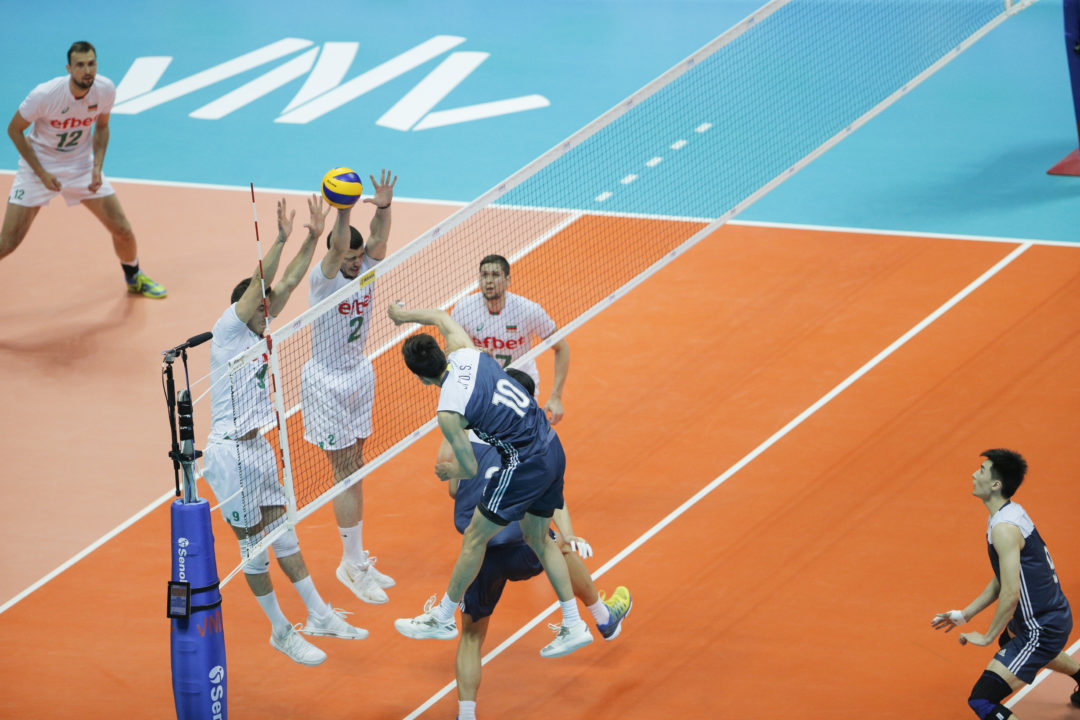 Bulgaria dominated China on the offensive side of the ball and in serving, but had to overcome 39 miscues in a five-set win on Friday. Current Photo via FIVB

Bulgaria dominated China on the offensive side of the ball and in serving, but had to overcome 39 miscues in a five-set win on Friday.

Bulgaria outdid China in kills (61-42) and aces (9-3), but China boasted a slight 11-9 edge in blocks and took advantage of 39 miscues, while committing just 24 in both teams’ Volleyball Nations League opener.

Chuan Jiang led the way for China with 17 points, including 16 kills. Shuhan Rao was the only other player to score in double-digits, notching 14 (10 kills, 3 blocks, 1 ace). Yaochen Yu also added three blocks.

Yordanov paced Bulgaria in Set 1. Chuan countered in Set 2. As Bulgarian errors piled up, China snuck away with 25-18 and 25-19 wins in sets 2 and 3. In the end, Yordanov, Penchev and Yosifov were too much and continued a stretch of more than 56 years of Bulgarian d0minance of the Chinese teams (dating to the 1962 World Championship).

Here are some of the post-match reactions.

China coach Raul Lozano: “We had a good performance and
made a new step in our growth. We have made progress in blocking and
attacking. However, we didn’t adjust when the opponents made changes,
and that was the turning point of the game. This is a high-level match, I
am satisfied with this result.”

Bulgaria coach Plamen Konstantinov: “We are very happy about the victory, because it is the first match of the tournament. We knew the first match in China would be very tough. China played very well at home, and we didn’t expect it would be easy. Like the result shows, they played really well, this is really an equal match. We started well in the first set, after that I think we lost our advantage. Good things came with some changes in the fourth set – some of my guys came from the bench and changed the match ,they played really well to help us win this difficult match. Generally, the main difference of the match is in attack, I think this is the main reason that gave us victory.”