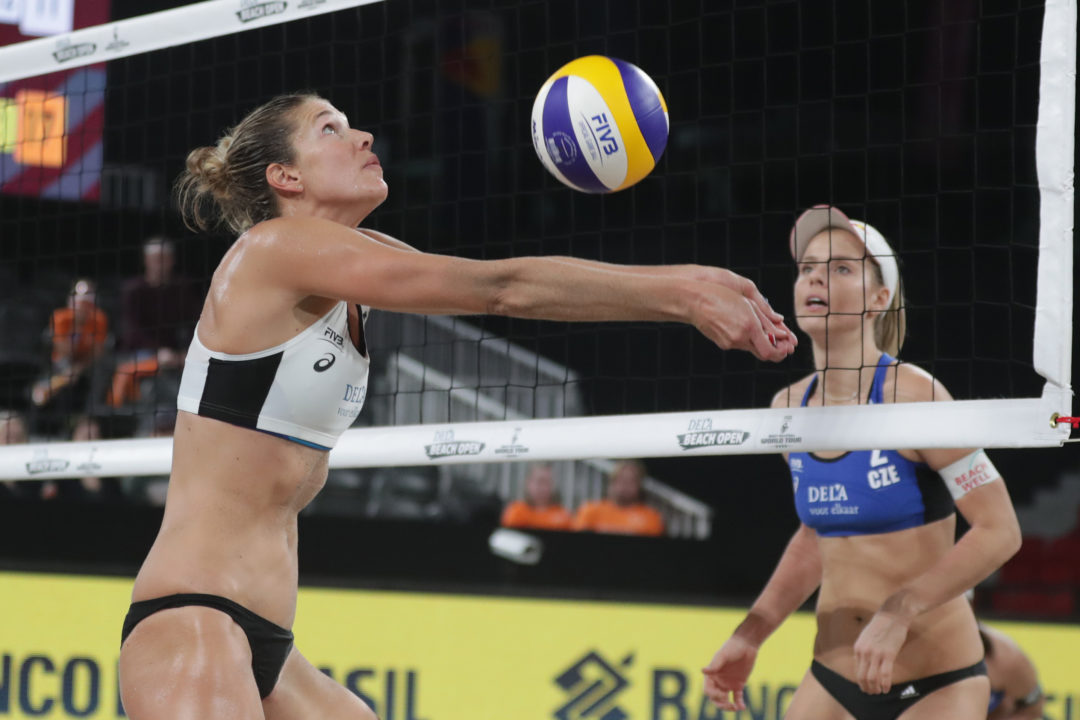 The 2017 Hague champions, Maria Antonelli and Carol Salgado of Brazil, are all that stands in the way of a dream debut for new American pair Alix Klineman and April Ross as both sides advanced through Saturday's semifinals in straight sets. Current Photo via FIVB

The 2017 Hague champions, Maria Antonelli and Carol Salgado of Brazil, are all that stands in the way of a dream debut for new American pair Alix Klineman and April Ross as both sides advanced through Saturday’s semifinals in straight sets.

Antonelli/Salgado are looking to repeat their June title and earn their second FIVB crown since teaming up midway through the 2017 season. The duo made their way to Sunday’s final with a 21-14, 21-19 victory over Swiss duo Nina Betschart/Tanja Huberli.

Down 19-17 in Set 2, the Swiss took an medical timeout. The Brazilians scored first out of the break, but Betschart/Huberli staved off two match point attempts with a kill and a block, before Salgado planted a soft cross court shot just inside the sideline to end it.

“I am very proud of my partner,” Antonelli said. “There is a reason I have medals here, because I love the people here. I am very happy to be here.”

Meanwhile, Klineman and Ross are in their first season together and the Hague tournament marks Klineman’s first on the FIVB Beach Tour. The pair began their journey through the DELA Beach Open in the country quota match and played through two qualifying rounds, three elimination rounds and now the semifinals to earn a shot at the gold. The Americans led 20-16 in Set 2, a Czech ace deterred them momentarily, before Ross issued the final blow off a pass from Klineman, sealing the 21-12, 21-17 win.

In 2017, Ross finished second at the Vienna World Championships in August and at the Long Beach President’s Cup in July 2017 with former partner Lauren Fendrick after parting ways with longtime teammate Kerri Walsh Jennings. Together Walsh Jennings/Ross won 10 FIVB titles, the last in Long Beach in August 2016.

“It is so much fun out there,” Ross said after the win.

When asked to compare it to her success with Walsh Jennings, Ross said. “Honestly, it feels so much better.”

“I am lucky because I have the best partner possible, and we have been training a ton,” Klineman said. “And with our coach Jen Kessy, who is the perfect person to learn from because has played with April and played on the right, she is just giving me so much information. We train as hard as we can. I think we go every day trying to learn as much as we can and get better every day. We feel capable of beating anybody, so we are just trying to take it one point at a time, one game at a time, one match at a time.”